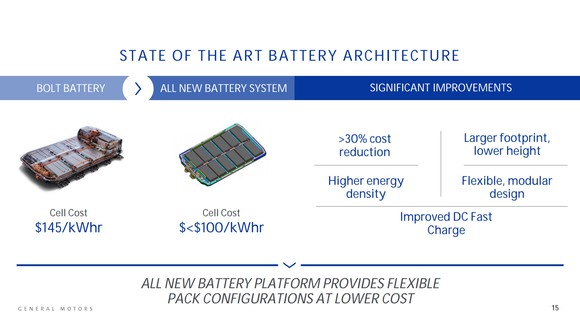 General Motors (NYSE:GM) and Honda Motor (NYSE:HMC) announced that they plan to team up on advanced batteries for electric vehicles in a bid to push back against Tesla (NASDAQ:TSLA) and its massive Gigafactory.

Simply put, Honda will buy electric-vehicle battery packs from GM to use in its own vehicles. The companies will each develop their own unique electric vehicles, but Honda’s will be designed to use GM’s upcoming next-generation batteries.

What are those “next-generation” GM batteries?

But GM has a more advanced battery system under development, including new cells and new battery packs. GM expects the new cells to cost less than $100 per kilowatt-hour (kWh), down from the roughly $145 per kWh it pays for the cells used in the Bolt. The new battery cells have a higher energy density than GM’s current cells, they’re better for high-speed recharging, and they have a lower profile that gives GM much more flexibility around the shapes of its battery packs.

The new cells will allow GM to build smaller, thinner battery packs with more range. The new batteries will come to market as part of an all-new electric-vehicle architecture that GM will launch in 2021. Importantly, GM CEO Mary Barra has emphasized that the electric vehicles built on that architecture will be profitable.

No. Honda will design its own electric-vehicle architecture around GM’s new battery packs. Part of the agreement is that GM will share all of the relevant engineering information well in advance of the new batteries’ launch.

Why does Honda want to work with GM?

Honda and GM have already established a partnership around another electric-vehicle technology: hydrogen fuel cells. GM and Honda have been working for several years to jointly develop a new series of lower-cost fuel cells for automotive applications. Honda has already brought one of the jointly developed cells to market in its new Clarity FCV sedan, while GM has said that it will wait until the next-generation cell is ready before launching its own fuel-cell-powered products, likely around 2020.

Last year, Honda and GM set up a joint venture to (eventually) mass-produce the fuel cells in a factory in Michigan.

What does Honda get out of this deal versus just buying battery cells?

Honda could certainly strike a deal to buy battery cells from a company like LG Chem and use them in a pack of its own design. But by buying from GM, it gets a complete battery “module,” saving it the step of developing a pack. It also gets GM’s upcoming new battery cells, which may have range, packaging, or cost advantages versus the cells available to Honda from battery makers.

It’s very likely that GM gave Honda some inside information about the capabilities of its upcoming new batteries and that Honda decided that buying GM’s battery packs made more sense than alternatives.

Timing may also be a factor. Honda lagged other major global automakers in stepping up development of battery-electric vehicles. Its current battery-electric model, a version of the Clarity sedan, has just 80 miles of range. Honda may have decided that working with GM would help it get competitive vehicles to market more quickly.

What does GM get out of this?

Obviously, GM probably plans to make a profit on the battery packs it sells to Honda. That’s a good thing. But there may be a bigger consideration: The scale that Honda adds might help GM bring the costs of the new battery cells down further, benefiting both partners — and helping to offset the scale advantage that Tesla is expected to have once its battery Gigafactory in Nevada is fully up and running.

When is this all going to happen?