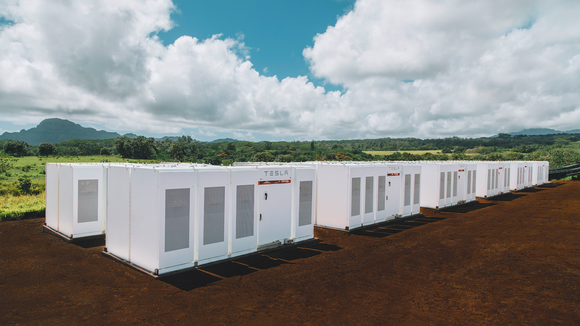 For the most part, headlines after the meeting seemed focused on Musk confirming that the automaker is on track with its production and profitability plans. Of course, there’s good reason to believe the news that Tesla is on track to achieve a production rate for its Model 3 of 5,000 units per week by the end of June and GAAP profitability in both Q3 and Q4. Production delays have previously plagued the Model 3 as Tesla attempts to transform into a mass-market auto company, which has weighed on profitability. But another narrative discussed during the shareholder meeting is worth examining: Tesla’s surging energy storage business.

Launched just three years ago, its energy storage business has already swelled to a total of 1 gigawatt-hours of energy storage deployments globally as of May, Musk said during the shareholder meeting. He also said he expects that in “less than a year from now” Tesla will deploy another GWh of energy storage.

But this is just the beginning, according to Musk. “I think for many years to come, each incremental year will be about as much as all of the preceding years [in terms of energy storage deployments],” the CEO predicted.

Furthermore, he said deployments are ultimately limited by production, which is notable since Tesla’s Gigafactory has morphed into the world’s highest-volume battery factory when measured by battery capacity output.

Musk put the extraordinary demand for energy storage and the scale of the Gigafactory’s output into perspective:

We would actually be able to do more if we could produce more. And we are producing a lot of batteries. So in fact, next quarter, at the Gigafactory, we expect to make more battery capacity than all other EVs combined worldwide, including China. So I mean, this is a really crazy amount of batteries. This one factory is making — will make more than all the other factories on earth…

Of course, sharp growth in Tesla’s energy storage business isn’t a new development. In the company’s first-quarter update, Tesla said energy storage deployments were up 161% sequentially to 373 megawatt-hours, helped by a utility-scale project that was 129 megawatt-hours by itself.

“Electric utilities and power producers around the globe are increasingly appreciating the value proposition of our Powerpack storage systems based not only on economic benefits but also on the operational benefits of faster response time and greater reliability of the electric grid,” Tesla said about its energy storage business in its first-quarter shareholder letter.

In addition, even though Tesla deployed a record number of its residential Powerwall energy storage systems during the quarter, its backlog for the product continued to grow.