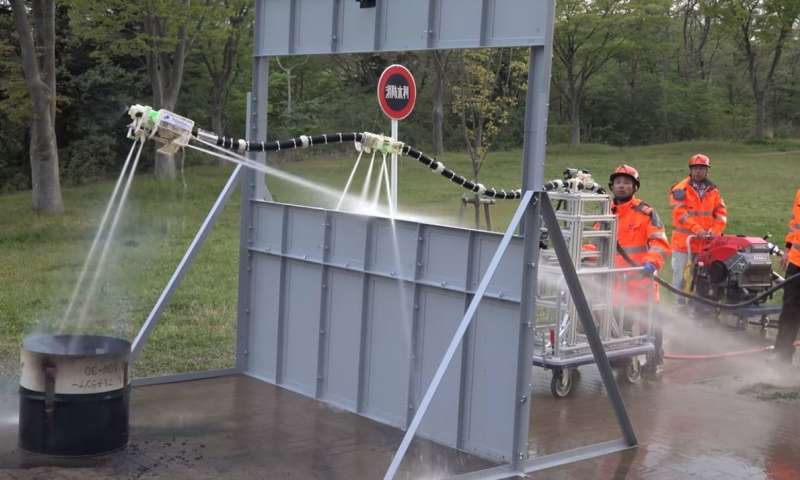 Japan’s engineers and technologists continue working to solve problems in handling various types of disasters—earthquakes, tsunamis, any unforeseen calamity causing extreme damage to property and human lives. This is apparent in a video that shows a research project of disaster robotics, the ImPACT-TRC Program. The Program Manager is named as Prof. Satoshi Tadokoro, Tohoku University.

Worldwide, robots are considered helpful supports where direct human intervention is risky; engineers and scientists think of others solutions.

In this quest, a recent fire-fighting robot has been introduced in prototype stage. This is the Dragon Fire Fighter, 3 meters long.

The Mainichi reported that the robot was announced on May 30, by a team including members of Tohoku University. The robot’s name is apt since the robot, which is connected to a hose, resembles a dragon when in operating mode.

Two noteworthy features give this robot a distinctive edge in fire-fighting. It (1) can help firefighters put out hard-to-reach blazes, such as those up high, and (2) it can locate the origin of a fire using a thermal camera.

The Mainichi said it “can fly up and extinguish fires beyond obstacles in places that could be difficult for human firefighters to reach. They envisage it being used to fight fires in high-rise buildings, large warehouses and other places where it is difficult to approach the source of the blaze.”

As the video shows, the robot can inject water from multiple nozzles, rising with thrusts. “Special devices with four holes each are attached to the tip and middle of the hose, ejecting water to propel the robot through the air,” said The Asahi Shimbun. “High-pressure jets of water on the head of the robot and in a middle section are used to lift it off the ground,” said Mainichi. The robot can be controlled remotely to seek out the source of a fire and the operator can change the direction of the robot if needed.

Tohoku University professor Satoshi Tadokoro, commented, “There have been robots in the past that go into dangerous areas in place of firefighters, but this is the first to fly over an obstacle and directly extinguish a fire.”

“Researchers envisage the robot being attached to the end of a ladder or another object, and they plan to extend its reach to about 20 meters in the future. They aim to put it to practical use within three years.”