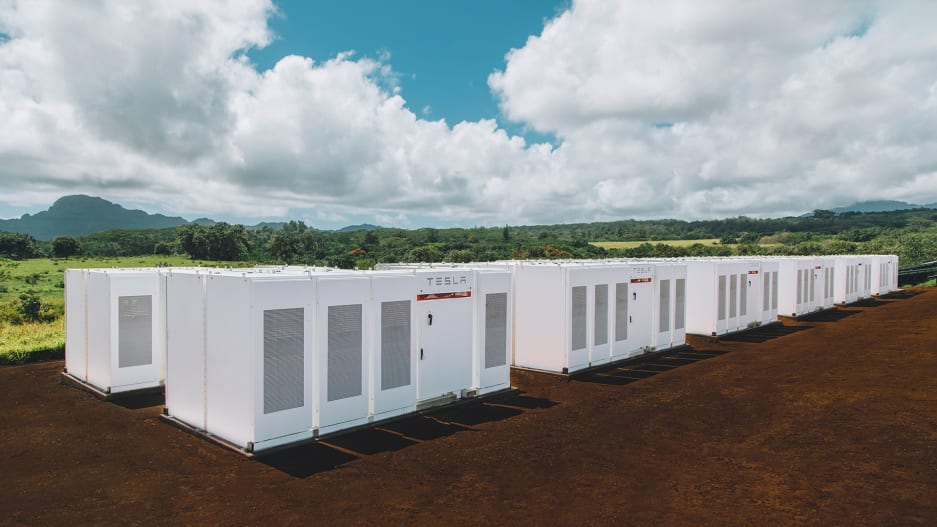 Tesla, it’s been said, is less a car company than a battery company that sells cars. Today, the company is announcing a new milestone: Since 2015, it has installed a worldwide total of a gigawatt-hour of energy storage–technology that is critical for using renewable energy at scale. For comparison, that’s nearly half of the entire amount of energy storage installed globally last year. As the company’s electric car business quickly grows, the energy side of its business is growing even faster.

The market is growing as renewable energy is also becoming cheaper and expanding. Batteries can be used to store any type of energy–on a grid with traditional fossil fuel plants, the technology can be used, for example, when power demand suddenly peaks on a hot day and thousands of air conditioners turn on (this helps avoid the need to fire up an extra coal or gas plant). But it’s particularly critical for renewables, since batteries make it possible to use solar power at night, or wind power when the wind isn’t blowing.

In Australia, the world’s largest lithium-ion battery, installed by Tesla over an area the size of a football field at a wind farm, is saving consumers millions of dollars by making the grid more reliable. On the Pacific island of Ta’u in American Samoa, a solar microgrid using 60 of Tesla’s large Powerpack batteries has fully replaced diesel power. In Hawaii, Tesla batteries store energy generated during the day at a solar farm on Kauai to release it at night. In Southern California, a Powerpack system handles peak energy demand without requiring extra fossil-fuel-powered plants to come online.

In Puerto Rico, after helping to provide emergency power following Hurricane Maria, Tesla is now installing permanent microgrids. More than 1,000 households on the island, like others around the world, now also use Tesla Powerwalls, the company’s product for home electricity storage, which can be connected to home solar panels to help keep lights on after disasters. Powerwalls can also be connected to each other to form “virtual power plants.” In Australia, for example, Tesla is working with the government on a new plan to distribute solar panels and batteries to 50,000 homes, which will work together to supply clean energy to the grid.

Energy storage is a fundamental part of Tesla’s business. “We see it as absolutely core to our mission as a company of accelerating sustainability,” says Straubel. “Electric vehicles, where we started, are one key piece of that puzzle. They’re an enabler for using sustainable energy and transportation, but they need to be linked to an energy generation source . . . We really want to solve this all the way, with a big-picture mind-set of truly solving the problem, not just providing someone a piece of the [solution] and then they have to go and figure out how to charge their car sustainably.”

As the company has ramped up its own production of batteries for cars, beginning to make use of its massive Gigafactory under construction in Nevada, that has helped bring costs down for batteries that can also be used in homes, businesses, or by large power plants. “The economy of scale that we can derive, and have derived, from building the Model S and the Model X, or now the Model 3 at scale, is what has allowed us to bring down the cost of energy storage for all these different applications,” Straubel says.

One research firm, Wood Mackenzie Power and Renewables (also known as GTM Research), estimates that annual energy storage deployments will grow from 2.3 gigawatt-hours in 2017 to 21.6 gigawatt-hours in 2022 globally. The researchers say that other companies, such as LG and China’s BYD, are also making some of the technical advancements that Tesla is making, but Tesla does have advantages.

“Tesla has a definite advantage with respect to its manufacturing scale [at the] Gigafactory in the Western hemisphere, and access to market through SolarCity’s workforce, now part of Tesla Energy, but how effective it is in protecting and capitalizing on these advantages is a matter of execution and financial standing,” says Ravi Manghani, director of energy storage at Wood Mackenzie Power and Renewables. As the company is struggling to meet production targets for its Model 3 cars, investors have questioned its financial health. Moody’s downgraded Tesla’s credit rating in March, hurting the stock price. Analysts have suggested that the company could soon run out of cash and need to raise another $2 billion or more this year. The company now also has a backlog of Powerwall orders.

But the company has already played a role in making energy storage technology more visible. Until the company first launched its Powerwall and Powerpack products in 2016, “energy storage was still a very nerdy and geeky sort of technology,” Manghani says. “But since Tesla’s launch, and that huge splash that it made in the industry, energy storage became a much more publicly known commodity or technology. We joke about it that everyone and their mom now knows about battery storage. From that perspective, it’s had a much more profound impact, which surpasses what other similar companies have been able to do in the industry.”

Tesla’s giant installation in South Australia–which was built ahead of schedule at the end of 2017 after Elon Musk bet the local government that Tesla could install the technology in less than 100 days or it would be free, promising to solve a problem of recurring blackouts–has helped pique the interest of other utilities. (Bringing a new power plant online, which is another way to make a grid more reliable, usually takes years.) The company expects its energy storage business to triple in 2018, and is currently working to ramp up production on its backlog of Powerwall orders. It’s also ramping up production on technology used in larger projects. The business, Straubel says, is split roughly in half between Powerwall installations and larger Powerpack projects.

The growth is only a fraction of what’s needed to transform energy. In 2015, when Elon Musk talked about the company’s new energy division, he estimated that it would take 2 billion Powerpacks to fulfill the world’s energy needs. “Even at 300%, we’ll need to grow it this way for decades, frankly, to really solve the problem,” says Straubel. “And not just us, but other companies need to get involved, too.”