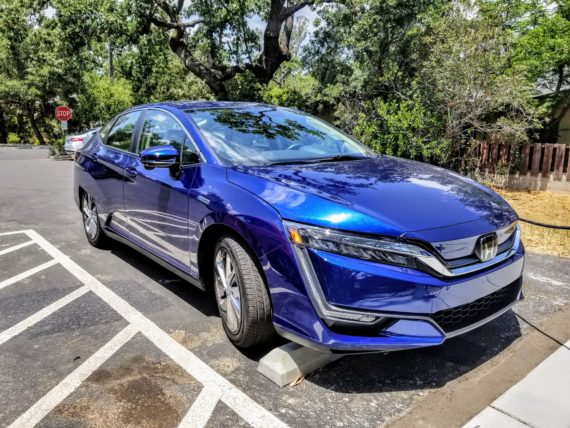 Honda is finally starting to move into electric vehicles with its Honda Clarity Plug-in Hybrid, and just a few days ago, Honda brought the Honda Clarity Electric to dealerships in California and Oregon. We spent a week with the fully electric flavor of the Clarity family and came away loving some parts of it … and not so excited about other aspects. Let’s start with the specs.

The Honda Clarity Electric is hot and torquey out of the gates. Honda took the very familiar and well-crafted experience from its fleet of vehicles into the Clarity and packed it full of batteries and electric motors to bring a full-sized, fully electric Honda driving experience to the masses. The Clarity Electric is loaded with intuitive technology solutions that make the driving feel very comfortable for drivers that don’t want to have to re-learn how to driving experience just to go electric.

Hitting the road in the Clarity Electric, it takes off at the touch of the pedal. Drivers have the option of speaking to its 120 kW | 161 horsepower electric motor in Eco Mode, Normal Mode, or if new tires are in your future, Sport Mode. All 3 modes bring the smooth, nearly silent driving experience with them to the streets, but with different amounts of power applied.

Eco and Normal Modes do what you would expect them to do, sipping less and less energy, with a muted response to the accelerator while still allowing plenty of power for normal driving. Kicking things up to Sport Mode, the Clarity Electric has no problems getting the blood pumping as the tires scream in opposition to the torque being applied.

Drivers have for years equated horsepower to fast cars, but electric vehicles throw all of this out the window, serving as an abrupt reminder that the sensation of a fast car comes not from the horsepower, but from the torque that propels us off the line and pins us deeper and deeper into our seats.

In the driver’s seat, the Clarity Electric offers a nice collection of active safety and driver assistance tech. Traffic-Aware Cruise Control (TACC) continues to be one of my favorite features in modern vehicles and the Clarity Electric’s pairing of it with its active Lane Keep Assist feature gives freeway drivers a nice backup that takes some of the work of navigating traffic and even staying in the lane off the table

It’s no Tesla Autopilot, but it does a fair job of detecting lanes and even allowing the driver to take their hands off the wheel for short periods before calling them back with in-dash alerts. It is not intended to be a hands-free system at this point but it is clear where Honda is going with the technology just based on the current implementation.

Getting into the Honda Clarity Electric, you wouldn’t have any idea that it’s actually an electric car — and that’s a beautiful thing. The average car buyer wants a car that feels, looks, and operates like the average car on the market — 4 doors, a steering wheel, power seats, and a speedometer. The Clarity Electric beautifully integrates it’s electric vehicle parts into a very comfortable, spacious, and modern interior.

The infotainment system in the Clarity includes a functional navigation system that includes both gasoline stations and electric vehicle charging stations. The inclusion of the latter is a welcome addition and makes finding stations a breeze.

The front and rear seats of the Clarity Electric offer passengers a roomy, comfortable experience with plenty of room to store all of the things that a growing family needs to keep the kids occupied and the driver caffeinated.

On the outside, the Honda Clarity Electric looks like a slightly larger Accord, with its signature Honda grill that sweeps back to an admittedly awkward rear end. The curves sweeping back on either side of the car arc upward to the rear, leaving it like a beta version of what it was ultimately meant to become.

The rear end of the vehicle is framed up with a bold black accent panel that makes the futuristic lighting array pop. The contrast makes the vehicle look like it would be just as at home in Ready Player One without making you wonder if it will look out of place in the parking lot of the local shopping center.

Having said that, for most commuters, 89 miles (143 kilometers) is more than sufficient to handle daily driving tasks but for many Americans, it will require intentional thought and effort to integrate it into their lives. That challenge is compounded by the diminutive supply of DC fast chargers in the current mix of public charging networks. In the area we test drove the vehicle, there were only a handful of the SAE Combo / CCS charging stations that the Clarity Electric requires.

On one occasion, we built a fast charging stop into our plans, only to find that the station was completely powered down and had even dropped from the network. The reliance on owners/operators to provide a consistent experience for the ChargePoint network is clearly a challenge. We moved to another Level 2 ChargePoint charger in a different location and found that 1 of the 4 stations was also offline, making charging more challenging than it has to be.

DC fast charging in the Clarity Electric offers drivers the ability to recharge up to 80% (71.2 miles | 114 kilometers) in just 30 minutes. If charging stations exist in the right locations, this can be a very suitable option to get back on the road in about the time it takes to enjoy a cup a coffee. Stepping down to 240 volt charging tops the battery up in a very respectable 2.5 hours, while 120 volt charging at 15 amps will require 19 hours for a full charge.

The Honda Clarity Electric is a well rounded entry into fully electric vehicles for Honda. Its full-sized, well accompanied cabin and low monthly payments will surely appeal to the masses.

On the other side of the coin, the 89 range of the Clarity Electric makes it uncompetitive with modern electric vehicles. This weakness is further underscored by its reliance on a DC fast charging network that simply isn’t built out sufficiently to support even a few percent of electric vehicles on the roads. It’s clear that this will shift over time, but at present, public fast charging outside of Tesla’s walled garden is too fragmented and unreliable.