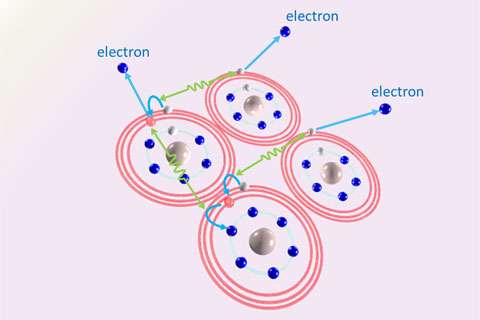 It is the “drosophila” of modern physics: the uniform electron gas. Just as the fruit fly is used to describe the principles of genetics this model of a gas can be used to investigate important characteristics of electrons. This model also known as jellium describes the properties of electrons in metals, in molecules and in clusters of atoms. Further, electrons determine the behavior of stars and planets and the structure of Earth’s core. Here they are subject to extreme conditions: Temperatures of several thousands to millions degree celsius and pressures compressing the electrons up to a thousand times stronger compared to a metal.

Similarly extreme conditions are nowadays also realized in some laboratories for example with the help of high-intensity lasers or free electron lasers, such as the XFEL at Deutsches Elektronen-Synchrotron DESY in Hamburg. Here materials are investigated by heating them up, compressing or highly exciting them. After several years of intense research a team of the Institute of Theoretical Physics and Astrophysics (ITAP) at Kiel University succeeded in describing the thermodynamic properties of electrons under extreme conditions. They summarized their results in an article in the current edition of the journal Physics Reports.

For over 60 years, physicists worldwide have been trying to understand and predict the behavior of the electrons. A large number of different models of the uniform electron gas has emerged. These are used as input for more complex theories like density functional theory, which has been established as the bedrock of the description of atoms, molecules, and solids. Unfortunately, the accuracy of the underlying models had remained unclear for a long time.

Over the last five years, scientists from the ITAP led by Prof. Michael Bonitz achieved a breakthrough together with colleagues from the Imperial College London (Great Britain) and from the Los Alamos National Laboratory (USA). They developed two novel computer simulation techniques the combination of which allowed them to predict the behavior of electrons for all relevant conditions. These Quantum Monte Carlo Simulations are based on probability theory and are the key to successfully tackling the present extremely high-dimensional complex problem numerically.

“Our results are the first exact data concerning the thermodynamic properties of electrons under extreme conditions. They allow us to benchmark and improve all previous models for the first time,” Bonitz looks ahead. Their calculated results are freely available to researchers around the globe via the code “LDA_XC_GDSMFB,” which has been included into the widespread density functional theory library “libxc.”