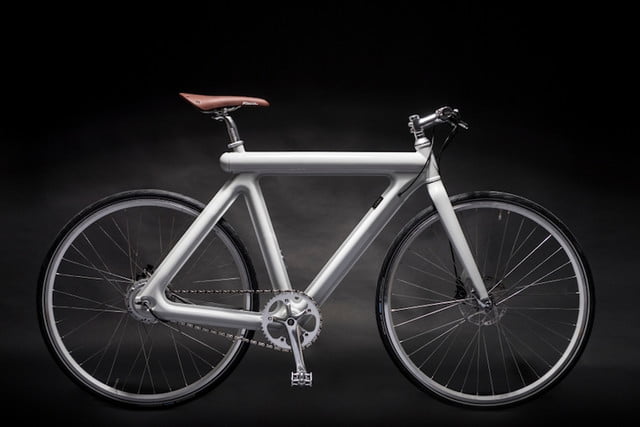 If you’re looking for an electric bike that offers plenty of technology and features, yet still manages to maintain a surprisingly low weight, then look no further than the new Leaos Pressed Bike. Designed and built in Italy, this particular model derives its name from the fact that its aluminum frame is constructed from two identical pieces that are pressed together using spot-welding to make an extremely lightweight, yet still durable body. This unique process was created by renowned designer Harry Thaler, and allows the ebike to weigh just 31 pounds, even with its drive, battery pack, and other components in place.

The standard model of the Leaos Pressed Bike comes equipped with a 250-watt electric drive mounted on its rear hub that is capable of generating pedal-assisted speeds of up to 16 miles per hour. That motor is powered by a removable battery pack mounted on the bike’s top tube, which gives it a range of about 56 miles between recharges. When in place, the battery seamlessly melds into the bike frame itself, giving the bike a unique look and more aerodynamic shape.

Other components include hydraulic disc brakes, a Schwalbe suspension, and a minimalist display for tracking speed, distance, time, and battery life. The standard version of the Pressed Bike is a single speed model, but cyclists have the option of adding a seven-speed chainset should they choose to upgrade the gearing. Other add-ons include mudguards, a cargo rack, panniers, and an LED lighting system.

Leaos is also offering a technology package that upgrades the capabilities of the Pressed Bike even further. This option costs 370 euros (about $430) and gives the bike the ability to connect to a smartphone app to track the rider’s performance and adjust settings on the electric drive. It also adds a code lock system that serves as a theft deterrent, although if the bike is stolen, it also features GPS tracking so owners can find their missing ride no matter where it goes.

The Leaos Pressed Bike is designed to be used as a daily commuter and features a geometry that is built for use in urban environments. The ebike is available to order now at a price of 2,990 euros, which converts to about $3,500 in the U.S. Find out more on the Leaos website.