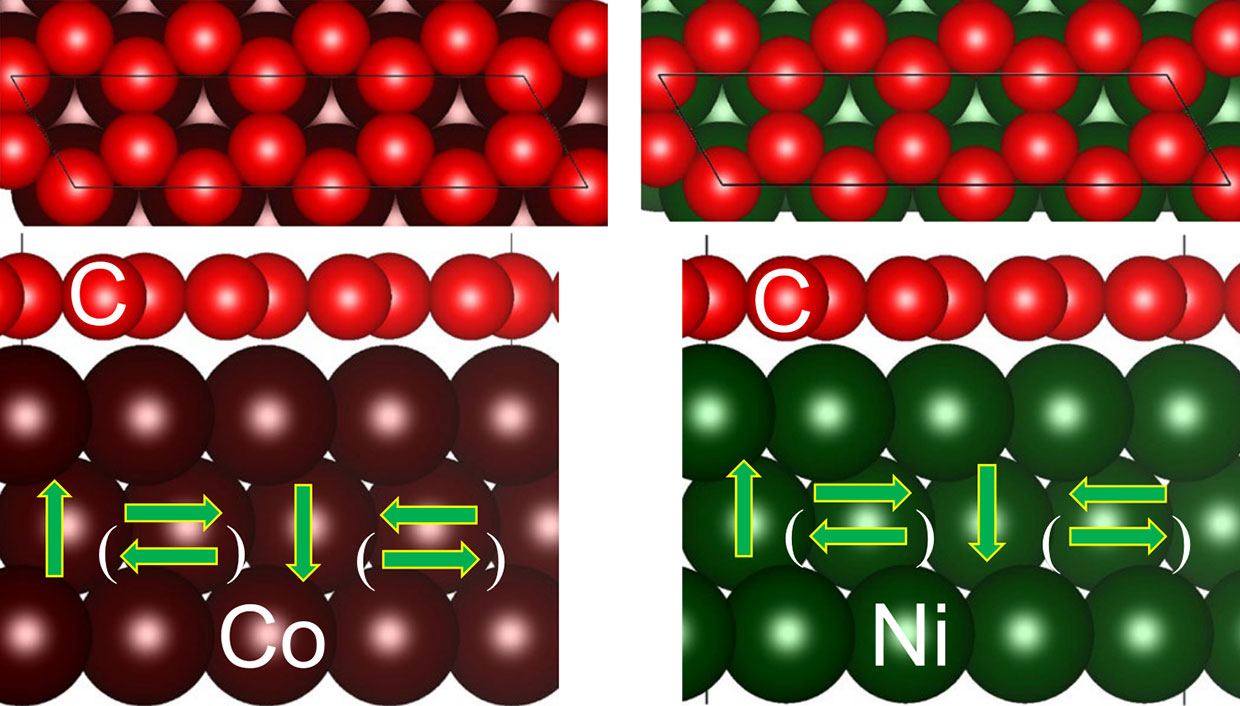 This year marks the 30th anniversary of when Albert Fert of France and Peter Grünberg of Switzerland independently discovered that layering materials a particular way created a phenomenon that became known as giant magnetoresistance (GMR). GMR has always been an opening to the world we now call “spintronics,” in which the spin of electrons, rather than the charge, is used to encode information.

One of the most visible and ubiquitous results of GMR’s discovery is that smartphones are now equipped with a GMR-based hard-disk drive that can hold thousands of photos, videos, and songs. In other words, GMR’s discovery has transformed our lives.

Now, an international team of researchers from the United States and Europe—with the European contingent including Fert once again—has found a new material phenomenon when layering graphene with magnetic materials that could lead to a new era in spintronics that the researchers have dubbed “spin-orbitronics.”

In research described in the journal Nature Materials, scientists from the U.S. Department of Energy’s Lawrence Berkeley National Laboratory and France’s Alternative Energies and Atomic Energy Commission have discovered that when a graphene coating is added to magnetic materials, like cobalt or nickel, the combination of electronic and magnetic properties creates the essential ingredient for triggering swirling patterns at the interface of where these materials meet.

These swirling patterns are known as skyrmions and, for the last five years, have been considered a potential way for storing and erasing data on magnetic media. The prospects of skyrmions as a data storage medium got a boost earlier this year when another group of researchers demonstrated for the first time that a single skyrmion could be electrically detected at room temperature.

In order to create these skyrmions, you need a very strong interaction between the electrons of the layered materials. These interactions are known as Dzyaloshinskii–Moriya interactions (DMIs). These DMIs typically occur at the interface between a magnetic film and a heavy metal. The DMI mechanism involves the electrons of the heavy metal interacting with the spins of the atoms in the magnetic layer, and that have spin-orbit coupling with the heavy metal sites. This is where we get the researchers’ “spin-orbitronics” term.

In this latest research, the scientists discovered that they didn’t need a heavy metal layered with magnetic films to create the DMI effect, but that graphene could do the trick. In fact, graphene—which had been considered a poor candidate for producing this DMI effect because it’s a weak spin-orbit coupling material—produced a DMI effect so large it could change the chirality—clockwise or counter-clockwise direction—of the electrons.

“Our work opens up an additional route towards the observation of skyrmions in graphene-based materials which have been of significant interest for graphene spintronics,” said Mairbek Chshiev, professor at Université Grenoble Alpes, and co-author of the research. “We have demonstrated that ferromagnetic/graphene structures provide a large DMI, which is an essential ingredient for skyrmions.”

This large DMI in the ferromagnetic/graphene material means that it is capable of changing the electron spin direction (or chirality) of the magnetic material so completely that the entire material could have its chirality switched in one direction and then another in a very controlled way, offering a method for duplicating the “0” and “1” of digital logic.

This discovery still leaves us far from a real-world device that could exploit the phenomenon for data storage. “To make a real device, there are a lot of things to do in future,” said Hongxin Yang, a co-author of the paper and senior technologist with Avalanche Technology Inc. in San Francisco.

In addition to DMI, Yang believes that a future device will also need perpendicular magnetic anisotropy, which means the magnetization orientation has a preferred direction, in this case a perpendicular one. Yang added that the device may also need tunnel magnetoresistance to read the information—magnetic tunnel junctions form the backbone of read heads in GMR hard-disk drives.