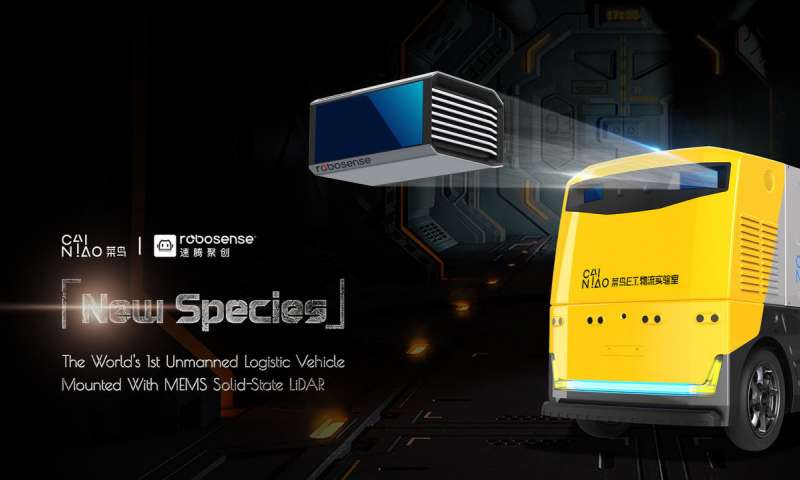 A solid-state LiDAR unmanned logistics vehicle was introduced in China on Thursday. Translation: Expect the onset of solid state Lidar in the form of a driverless delivery truck. The announcement came in the form of a joint release from Alibaba Group’s Cainiao Network and RoboSense.

The G Plus, as it’s called, is being developed with the LiDAR technology as a key feature.

Defining LiDAR, first of all, it stands for Light Detection and Ranging. Light is used in the form of a pulsed laser to measure variable distances. “A LIDAR instrument principally consists of a laser, a scanner, and a specialized GPS receiver,” according to the US National Ocean Service.

The big deal about the G Plus is that “This is the first time that solid-state LiDAR has been used in the development of an unmanned vehicle.”

The way Lumb sees it, “The G Plus is essentially a delivery locker on wheels.” He said it can carry packages and food at a pedestrian-friendly pace.

The speed, said Lumb, is maxed out at 10 mph and, even at that, it slows down to a bit over 6 mph if cars or people are around.

Just how does this delivery car see the direction of travel? Alibaba’s Cainiao G Plus is equipped with three RS-LiDAR-M1Pres, two in front and one in rear.

The vehicles see “the direction of travel: shape, distance, azimuth, travel speed, and direction of travel of pedestrians, cars, trucks, etc., as well as exact areas to drive.” There is a smooth flow in complex road environments.

“Presented at CES 2018, the core technology of the MEMS LiDAR is disruptive to traditional mechanical multi-beam radars. RS-LiDAR-M1Pre MEMS micro mirror scanning scheme requires only a few laser emitters and receivers to scan the MEMS micro-mirror in both directions because of the swing angle.”

This is what RoboSense had to say about RS-LiDAR-M1Pre. “With mechanical rotating parts replaced by a micro mirror structure, the laser components of RS-LiDAR-M1Pre are greatly simplified, which makes it a more competitive product with merits including low cost, mass producible, and more compatible to automotive standards.”

What is the G Plus plan of action? RoboSense and Alibaba are to provide delivery vehicles with solid-state LiDARs for G Plus unmanned logistics cars/trucks, said the news release on Thursday.

Lumb reported that “The company is testing the unmanned vehicle on roads around its headquarters in Hangzhou and expects to start building them by the end of 2018.”

What role would the G Plus play in the real world? The G Plus could be used in various commercial scenarios: used for a courier vehicle, mobile self-pickup station, or mobile coffee vending cart, for example.

“What really matters is that Alibaba is embracing a solid-state lidar rather than the big, burly, and costly mechanical alternatives,” Ross said in IEEE Spectrum.