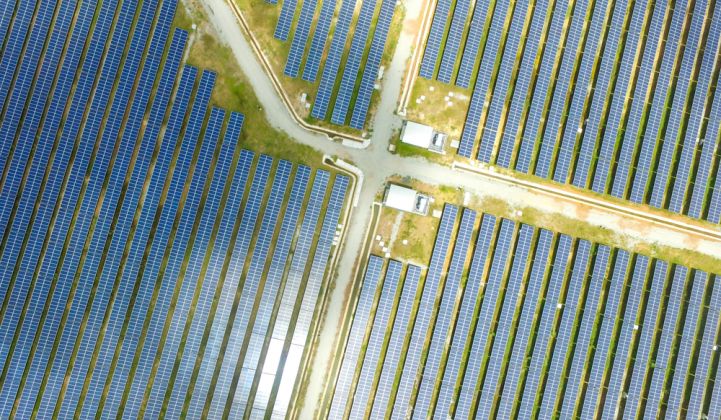 NV Energy announced Thursday it has contracted for more than 1 gigawatt of new solar energy and 100 megawatts of battery energy capacity, in a resource plan that’s still subject to regulatory approval and hinges on the outcome of a high-profile ballot measure.

The utility signed power purchase agreements for six new solar energy projects and three related battery storage projects, selected through a competitive solicitation initiated in January of this year. All projects are expected to be complete and serving customers by the end of 2021 – if the Public Utilities Commission of Nevada approves the plan.

“The six new projects position NV Energy to keep its commitment to double renewable energy by 2023 and, importantly, by diversifying our state’s electricity generation portfolio, will reduce the costs to serve customers,” said CEO Paul Caudill, in a statement.

The clean energy expansion plan also represents a step forward in the company’s long-term goal of serving Nevada customers with 100 percent renewable energy, he said. NV Energy claims the direct investment in Nevada’s economy will be greater than $2 billion, and will create 1,7000 construction jobs and 80 permanent, long-term jobs.

Work on the resource planning effort began shortly after Nevada’s 2017 state legislative session ended, “and demonstrates that we are navigating the uncertainties in the current market, given Question 3 on the statewide ballot,” Caudill added.

Question 3, also known as the Energy Choice Initiative, would require the Nevada State Legislature to establish “an open, competitive retail electric energy market that prohibits the granting of monopolies and exclusive franchises for the generation of electricity.”

The Energy Choice Initiative first appeared on the November 2016 ballot as an initiated constitutional amendment, and was approved. In Nevada, constitutional amendments must be approved in two even-numbered election years in order to take effect. Mounting support for clean energy in the state has put enormous pressure on NV Energy to take action.

A recent poll conducted by The Mellman Group on behalf of The Nevada Independent found that voters like the idea of deregulation. Results showed that Nevadans approve of Question 3 on a margin of 54 percent to 16 percent, with 30 percent reporting that they are undecided. In 2016, the ballot questions passed on a 72 percent to 28 percent margin.

In the same poll, a large percentage of voters indicated support for a still-pending ballot measure that would increase Nevada’s renewable portfolio standard from 25 percent by 2025, to 50 percent by 2030. Voters supported that proposed amendment on a 68 percent to 20 percent margin, with 12 percent undecided.

The push for a competitive electricity market came after Wynn Resorts and MGM Resorts International opted to pay hefty exit fees — of $87 million and $15 million, respectively — in order to withdraw from NV Energy service, and instead purchase their power independently. The Energy Choice Initiative is currently backed by resort developer Las Vegas Sands and data center Switch, two of the state’s largest corporate entities, as well as Walmart, Patagonia and Tesla.

Caudill noted that NV Energy has the option to not proceed with the proposed resource plan in the event Question 3 passes, in order to avoid increasing the liabilities and risks to NV Energy customers.

If realized, the six solar projects announced Thursday will be added to NV Energy’s existing renewable energy portfolio, which includes geothermal, solar, hydro, wind, biomass – bringing NV Energy’s total renewable energy portfolio to more than 3.2 gigawatts. Three of the solar projects will be located in northern Nevada and three will be located in southern Nevada with a combined capacity of 1,001 megawatts (details available here).

Two projects being developed by NextEra Energy Resources and one project being developed by Cypress Creek Renewables will be coupled with energy storage (totaling 75 megawatts and 25 megawatts, respectively). The combined 100 megawatts battery capacity included in the plan represents first major investment in battery storage in Nevada, which happens to be home to Tesla’s battery Gigafactory.

“The pieces of legislation that I’ve sponsored or supported and signed I think have gone a long way to creating the environment where you have companies that are willing to make a $2 billion investment in our state,” he said at a press event Thursday.

Last year, Sandoval signed a popular bill to restore net metering credits for rooftop solar customers in the Silver State, giving the distributed energy market an enormous boost. However, he vetoed a bill to increase the state’s renewable energy mandate to 40 percent by 2030, as well as a bill to establish a community solar program in the state, citing uncertainty amid Nevada’s pending shift to an open and competitive energy market.