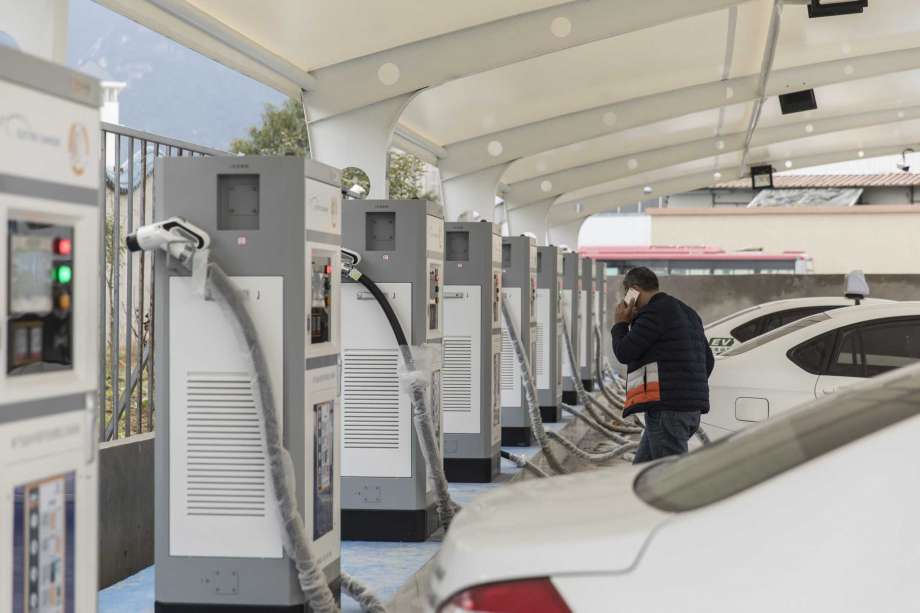 Teslas and Nissan Leafs are likely to become a much more common sight on the world’s roads in the next two years, the International Energy Agency says.

The global fleet of electric vehicles is likely to more than triple to 13 million by the end of the decade from 3.7 million last year, according to a report released Wednesday from the Paris-based institution, which was set up to advise industrial nations on energy policy. Sales may soar 24 percent each year on average through to 2030.

The findings illustrate the speed at which the world’s transportation system is shifting toward cleaner fuels as governments focus on limiting pollution and greenhouse gases. Tesla Inc. and Nissan Motor Co. have some of the best known EVs on the road now, but major automakers from Volkswagen AG to General Motors Co. and Audi AG have followed suit in announcing dozens of battery-powered versions of their models.

“The dynamic policy developments that are characterizing the electric car market are expected to mobilize investments in battery production, facilitating cost reductions and ensuring that battery production takes place at scales that exceed significantly what has been seen so far,” said Pierpaolo Cazzola, senior energy and transport analyst at the IEA and one of the authors of the report.

Here are some of the key findings of the IEA’s report:

1. China will remain the biggest market

Electric vehicles are expected to take just over a quarter of vehicles sold in the Asian nation by 2030, up from 2.2 percent last year, according to the IEA’s estimates. More than half of global sales in 2017 were in China, followed by the U.S.

The Chinese government has put a number of policies in place to encourage EVs, party of an effort to cut air pollution in smog-choked cities. In 2017, the government in Beijing it set minimum requirements for domestic carmakers on electric vehicle production through a credit trading system. It also extended a 10 percent tax rebate for consumers until 2020.

2. EVs will displace lots of oil from the market

Electric cars run on batteries charged by power plants, instead of on gasoline or diesel fuel. With an estimated 130 million light-duty vehicles expected on the world’s roads by 2030, the IEA estimates about 2.57 million barrels of oil per day won’t be needed. That’s about as much as Germany uses each day. Last year, the global EV fleet displaced 380,000 barrels a day of demand, about half of what Belgium consumes.

The IEA’s estimate is more punchy than Bloomberg New Energy Finance’s expectation that 2.23 million barrels per day will be displaced from the market by electric vehicles by the end of the next decade.

3. At least 10 more giant battery gigafactories will be needed

Demand for batteries is expected to rise by a factor of 15 by 2030, largely driven by light-duty vehicles such as cars and vans. China’s burgeoning market is expected to make up half of the world’s demand, followed by Europe, India and the U.S.

That means the world needs many more battery production plants like the Gigafactory that billionaire Elon Musk’s Tesla is building in Nevada. That facility draws its name from the the word giga, meaning billion. It will produce 35 gigawatt-hours of batteries over 4.9 million square feet of operating area.

4. Buses are going electric too

Almost 100,000 electrified city buses were sold last year, 99 percent of them in China. The Chinese city of Shenzhen is leading the pack with an all-electric bus fleet. A number of cities in the Europe’s Nordic region such as Oslo, Trondheim and Gothenburg also have electric buses in operation.

5. Cobalt and lithium demand is surging

Cobalt and lithium are key ingredients in the rechargeable batteries that power electric vehicles as well as electronics from mobile phones to laptops. Demand could possibly rise tenfold, but technological advances and adjustments to battery chemistry could also significantly reduce this.

Since about 60 percent of the world’s cobalt is mined in the Democratic Republic of Congo where child labor still exists, battery makers are under pressure to show that their products are made sustainably. This may provide an incentive to shift away from cobalt-heavy batteries.