Vietnam is addicted to coal. Its economy has grown over 6%, on average, since the turn of the century, among the fastest of its Southeast Asian peers, yet that growth is fueled by coal, the most polluting fuel source on the planet. This April, however, the decarbonization movement was given a boost of international recognition, as the esteemed Goldman Environmental Prize for grassroots advocacy was awarded to the first Vietnamese recipient, 42-year-old clean energy champion Nguy Thi Khanh, who hopes to end Vietnam’s reliance on coal and persuade the country to take a greener approach.

With a population a tad larger than Germany’s, Vietnam is in transition to realizing its centrally-planned government’s ambition for almost half of GDP to come from the high tech sector. Its top exports are broadcasting equipment, integrated circuits and computers. To power that transition, electricity demand and supply has grown over 12% a year in the last two decades; more recent growth (2010-16) has been in the 11% range, which illustrates the energy-intensity of GDP growth.

The government’s revised power development plan calls for demand growth for electricity to 2030 to continue in the high single-digit range. Coal is a critical fuel source, and one of the largest contributors to global warming. Vietnam’s per capita carbon emissions quintupled from 1990 to 2013. Global warming is a major threat to Vietnam, where rising sea levels are predicted to swallow up nearly half of the Mekong Delta, the source of much of Vietnam’s food, in coming decades. 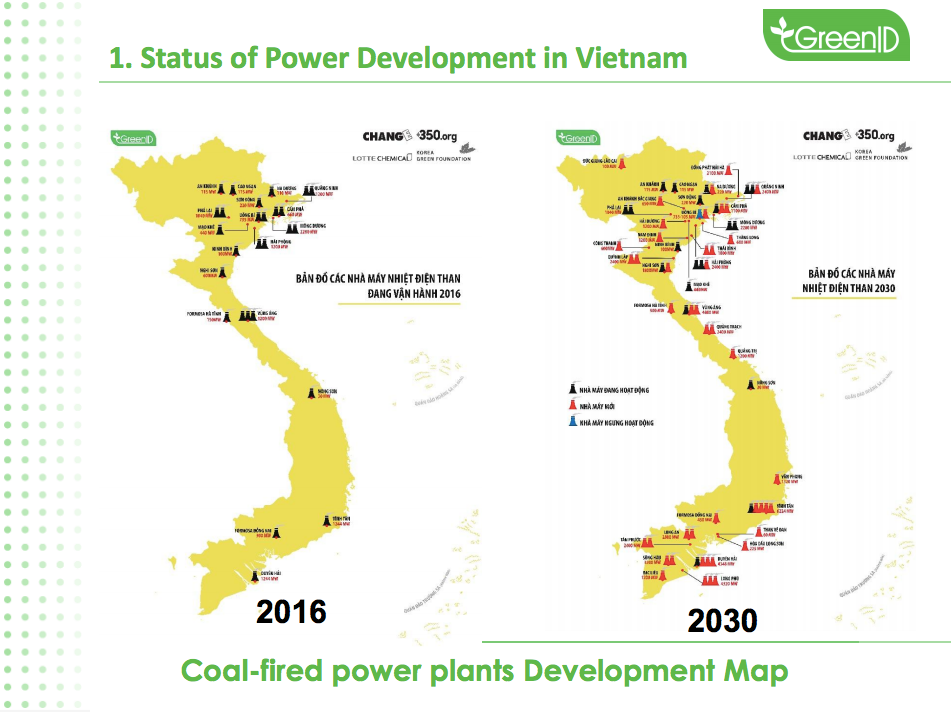 Vietnam and Indonesia in Southeast Asia, along with China and India, are ground zero for decarbonization because most of the world’s new coal plants are being built there. According to the government’s current national plan, electricity generated from coal will rise five-fold between now and 2030, and GHG emissions will rise markedly. This is at odds with Vietnam’s national pledge to the Paris climate accord, which targets 8% emissions reduction by 2030, which they say could rise as high as a 25% reduction with international support, such as financing for renewable energy.

Coal-fired plants in Vietnam contribute to more premature deaths annually than in any other country in Asia, save Indonesia, a Harvard study found. Air quality in big cities is as bad as that of Beijing’s, according to GreenID. In 2017, the city of Hanoi enjoyed just 38 days of clean air the entire year, with contaminant levels four times those deemed acceptable by the World Health Organization . Forty percent of rice production is at risk from sea level rise, according to Vietnam’s climate accord pledge, which highlights the vulnerability of the Mekong Delta and major cities.

There is a growing groundswell of popular opinion in Vietnam against new coal plants like the giant Long An Power Center near Ho Chi Minh City. It is being reported, even by the heavily-censored Vietnamese press.

When last month the esteemed Goldman Environmental Prize was awarded to 42-year-old clean energy champion Nguy Thi Khanh, the first Vietnamese recipient of this prestigious prize, international recognition was brought to both her and her cause.

She and two others founded Vietnam’s Green Innovation and Development Centre (GreenID), an NGO focused on demonstrating the viability of sustainable energy solutions for Vietnam, in 2011. The prize, awarded to recipients on six continents, will bring significant exposure and financial support to the work that Ms. Khanh and GreenID, in combination with 11 other NGOs under the banner Vietnam Sustainable Energy Alliance, are doing to lessen coal’s share in the overall power mix.

Ms. Khanh experienced the devastating effects of coal emissions firsthand, growing up in the rural village of Bac Am, where a coal plant fouled the air, and residents developed cancer at alarmingly high rates. Among her accomplishments, Ms. Khanh is noted for having stepped forward after several massive coal-related disasters, organizing community response, and going on television to bring the facts to light.

The Goldman Prize press materials highlight Ms. Khanh’s use of science-based arguments to show “how expensive and risky coal was as a primary source of fuel.” Recommendations stemming from reports she and GreenID produced led to Vietnam revising its Power Development Plan (currently in effect) to include more than twice as much renewable energy capacity as a proportion of total installed energy capacity in 2030 than originally planned (from 9.4% to 21%) and revising down its share of coal-fired capacity by 9%, from 52% to 43%. Coal’s share of the energy mix is currently 33%. Hydropower’s share is 38% and will fall to 17% by 2030 under the current plan.

Vietnam leads ASEAN in hydropower, generating 45% of all hydropower energy in the region, though as a power source, Ms. Khanh and other experts agree it is largely tapped out. Existing projects have serious ecological costs, and dams upstream in China, Laos and Cambodia threaten biodiversity in the Mekong River Delta region.

Despite considerable progress, Ms. Khanh and her group continue to push ahead. To make the case for more renewables in a yet-to-be-released 2020 government plan, she uses scenario analysis to demonstrate that under a business-as-usual scenario, Vietnam’s carbon emissions will rise about 8% a year by 2030. In a scenario in which current renewable energy prices and the negative health effects of coal are priced in, GreenID shows that investing in renewable energy is actually more cost-effective than coal, and emissions in this scenario are far lower. Steve Hellman, MD at Energy Impact Partners, a private equity firm that partners with utilities, commented on GreenID’s report, “While we acknowledge that serious externalities like pollution should be factored in…even without that consideration renewable energy (in Vietnam presumably solar and biomass, but also wind) is simply less expensive and more appropriate, particularly when paired with energy storage. We no longer live in a world with a false choice between affordable energy and a clean environment. Today the clean alternative is also the least expensive.”

In her acceptance speech for the Prize, wearing a red silk áo dài, or traditional Vietnamese tunic, Ms. Khanh took the podium to remind the world that “Vietnam’s energy future is at a crossroads,” and that “every decision and every dollar invested today will be felt in Vietnam and in our Earth’s climate for decades to come,” and that Vietnam had the choice to move away from over-reliance on coal and large hydropower. She implored banks and others to be mindful of the impact of their lending. “Our movement calls on international governments and corporations to stop investing in financing coal in Vietnam and help us move away from a high carbon future,” she said, stressing that there were many profitable opportunities to finance renewable energy in Vietnam.

“The future of society and nations cannot be decided by only one person like Mr. Trump,” she said. “Building consensus is important everywhere and for all nations. As citizens of the Earth, we need to continue to use science-based evidence and legislation and any potential avenues to shout our voice, and to build strong alliances among different stakeholders to convince our leaders, and take action before it is too late.”