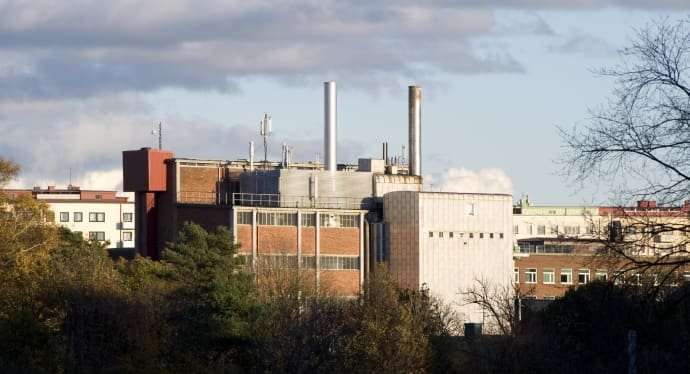 A chance to switch to renewable sources for heating, electricity and fuel, while also providing new opportunities for several industries to produce large numbers of renewable products. This is the verdict of researchers from Chalmers University of Technology, Sweden, who now, after 10 years of energy research into gasification of biomass, see an array of new technological achievements.

“The potential is huge! Using only the already existing Swedish energy plants, we could produce renewable fuels equivalent to 10 percent of the world’s aviation fuel, if such a conversion were fully implemented,” says Henrik Thunman, Professor of Energy Technology at Chalmers.

How to implement a switch from fossil-fuels to renewables is a tricky issue for many industries. For heavy industries, such as oil refineries, or the paper and pulp industry, it is especially urgent to start moving, because investment cycles are so long. At the same time, it is important to get the investment right because you may be forced to replace boilers or facilities in advance, which means major financial costs. Thanks to long-term strategic efforts, researchers at Sweden´s Chalmers University of Technology have now paved the way for radical changes, which could be applied to new installations, as well as be implemented at thousands of existing plants around the globe.

The solution presented involves widespread gasification of biomass. This technology itself is not new. Roughly explained, what is happening is that at high temperatures, biomass is converted into a gas. This gas can then be refined into end-products which are currently manufactured from oil and natural gas. The Chalmers researchers have shown that one possible end-product is biogas that can replace natural gas in existing gas networks.

Previously, the development of gasification technology has been hampered by major problems with tar being released from the biomass, which interferes with the process in several ways. Now, the researchers from Chalmers’ division of Energy Technology have shown that they can improve the quality of the biogas through chemical processes, and the tar can also be managed in completely new ways. (See animation and image below.) This, in combination with a parallel development of heat-exchange materials, provides completely new possibilities for converting district heating boilers to biomass gasifiers.

“What makes this technology so attractive to several industries is that it will be possible to modify existing boilers, which can then supplement heat and power production with the production of fossil-free fuels and chemicals.”, says Martin Seemann, Associate Professor in Energy Technology at Chalmers.

“We rebuilt our own research boiler in this way in 2007, and now we have more than 200 man-years of research to back us up,” says Professor Henrik Thunman. “Combined with industrial-scale lessons learned at the GoBiGas (Gothenburg Biomass Gasification) demonstration project, launched in 2014, it is now possible for us to say that the technology is ready for the world.”

The plants which could be converted to gasification are power and district heating plants, paper and pulp mills, sawmills, oil refineries and petrochemical plants.

“The technical solutions developed by the Chalmers researchers are therefore relevant across several industrial fields”, says Klara Helstad, Head of the Sustainable Industry Unit at the Swedish Energy Agency. “Chalmers´ competence and research infrastructure have played and crucial role for the demonstration of advanced biofuels within the GoBiGas-project.”

The Swedish Energy Agency has funded energy research and infrastructure at Chalmers for many years.

How much of this technological potential can be realised depends on the economic conditions of the coming years, and how that will affect the willingness of the industrial and energy sectors to convert. The availability of biomass is also a crucial factor. Biomass is a renewable resource, but only provided we do not deplete the conditions for its biological production. There is therefore a limit for total biomass output.

Potential for fossil-free fuels via gasification, by modification of existing plants

The facilities that could be modified have a type of combustion boiler called a fluidised bed. It is the most common technology in Swedish power and district heating plants, and is also common in many paper and pulp mills and sawmills. In total, over 100 plants in Sweden have fluidised bed boilers.

If all of these plants were modified to biomass gasifiers, they would be able to produce 346 TWh of biogas (methane) per year, given sufficient biomass availability. This corresponds to approximately one percent of the world’s total natural gas consumption in 2013.

Alternatively, the plants could produce 278 TWh of aviation fuel per year, equivalent to approximately 10 percent of the world’s total aviation fuel consumption in 2014.

The biomass consumption in the above scenarios exceeds the production estimates of the Swedish agriculture and forestry industry, so a major conversion to biomass gasification would probably require a mixture of domestic and imported biomass.

Globally, there are thousands of plants that have fluidised bed combustion, and could therefore be modified to biomass gasification.

The technology is very flexible when it comes to end-products. Gasification of biomass produces syngas—a mixture of hydrogen, carbon monoxide and carbon dioxide—which can then be converted to a variety of hydrocarbons. In addition to biogas and aviation fuel, you can, for example, produce methanol, gasoline and diesel.

In addition to power and district heating plants and paper-, pulp- and sawmills, the conversion could also include oil refineries and petrochemical plants. The gasification process could provide renewable hydrocarbons that can replace oil in the production of fuels, chemicals and materials. But also, it offers the possibility of supplementing their operations with their own combustion of biomass.

The technology can also be used to produce electro fuels. These are synthetic vehicle fuels that are produced with carbon dioxide captured from biomass combustion, electricity and water. In a future energy system, with a high proportion of electricity from solar cells and wind power, it could be a method of utilising electricity during surplus periods. An installation can be designed to switch between the production of electric fuel and other fuel, depending on the current electricity price.

With sufficient access to biomass, the expanded production could coexist with existing production in the facilities, and provide an increased degree of utilisation for today’s infrastructure.
The availability of sustainably produced biomass

There are differences in opinion over how much biomass can be produced in a sustainable way.

“My assessment is that biomass can make a significant contribution to the energy supply. But it is not enough to provide for all the applications that currently require fossil fuels,” says Göran Berndes, Professor of Biomass and Land use at Chalmers. “In this perspective, the conversion to gasification is very interesting, as it enables biomass to be used very efficiently to meet several different needs in society.”

Göran Berndes continues, “regardless of how biomass is used in the end, it is important to ensure that it comes from sustainable forestry and agriculture. Laws, regulations and market-based sustainability certification schemes provide better conditions for sustainable production, but countries and individual actors differ in terms of sustainability priorities. It is therefore likely that the changeover to renewability will still be characterised by a debate regarding the sustainability of different solutions.”