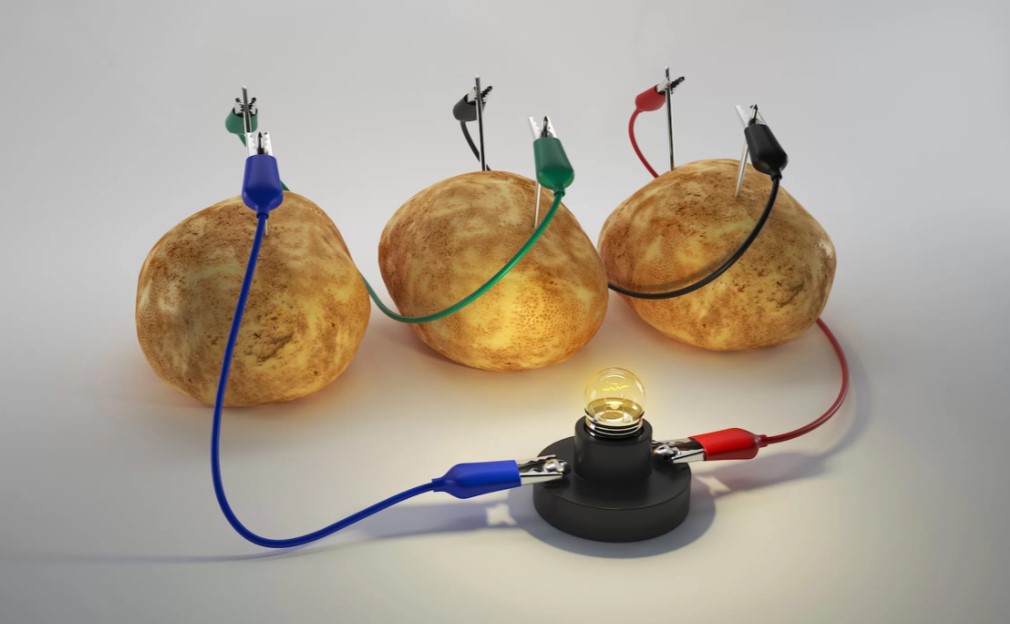 At any science fair, you’re almost guaranteed to see at least two go-to experiments: the clichéd papier-mâché volcano and the ever-popular pickle or potato battery. Many people may think it’s amazing that a simple piece of produce can conduct electricity. As it turns out, that’s not the whole story.

There are many types of electrical conductors. These include traditional electrical conductors, such as the copper and silver wires that are used to run electrical currents in homes and buildings, and ionic conductors, which can power electricity via free moving ions. Organic material, such as human tissue or the potato in your science experiment, are ionic conductors that create ionic circuits. Electrolytes — chemical compounds that create ions when they are dissolved in water — in these materials do all of the work.

“Fruits and vegetables conduct electricity in the same way a salt solution will complete an electrical circuit,” Michael Hickner, an associate professor of materials science and engineering at Penn State, told Live Science. “It’s due to the ions in the salt solution. They don’t conduct electrons [as traditional electrical conductors do]

An ionic conductor contains positive and negative charges — otherwise known as charged ions — that move freely when they come into contact with a voltage. For example, when table salt is dissolved in water, the sodium and chloride — which have opposite charges, as Na+ and Cl- — create an ionic solution, Hickner said. These ionic solutions are called electrolytes and can be found in every living thing. Because of this, technically, any fruit or vegetable could become an ionic conductor, but some are better at it than others. This is also why salt water or unfiltered tap water are better ionic conductors than filtered fresh water.

The best food battery is any fruit or vegetable that has high levels of superconductive ions, such as potassium or sodium, and the proper internal structure to create a working current. Potatoes, which have homogenous structures, and pickles, which have high levels of sodium and acidity, are good examples of such foods. For an extra electrical “oomph,” you can soak your potato in salt water before setting up the potato battery experiment, Hickner said.

In contrast, tomatoes have unorganized, messy insides and often leak, and even an orange — which has high levels of potassium— won’t work well, because the flesh of the fruit is divided into internal compartments, and these create barriers that block the current, Paul Takhistov, an associate professor of food engineering at Rutgers University in New Jersey, told Live Science.

Some fruits and vegetables may be chock-full of superconductive ions, but you’ll need a few more materials to turn these foods into batteries. The voltage from the battery comes from electrodes made of two different metals, such as copper and zinc, Hickner said. You can easily make a potato or pickle battery using a copper penny and a galvanized nail (which is usually made of iron coated with zinc).

“The fruit or vegetable can’t conduct on its own. It needs something to drive the ions,” Takhistov said. “When you insert two different metals and connect them with wire, you create an electrical circuit. Then, when this material is brought in contact with the electrolytes, the battery reaction starts to generate the voltage. Because of the difference in electrical potential energy between the two metals, the positive and negative ions will begin to move freely.”

But could a potato battery power, for example, a phone? Probably not.

A potato battery can produce only about 1.2 volts of energy. Takhistov said you would need to link many potato batteries in parallel to create enough of a current to charge a device like a phone or tablet. “At that point,” Takhistov said, “it’s probably just easier to use your phone charger.”