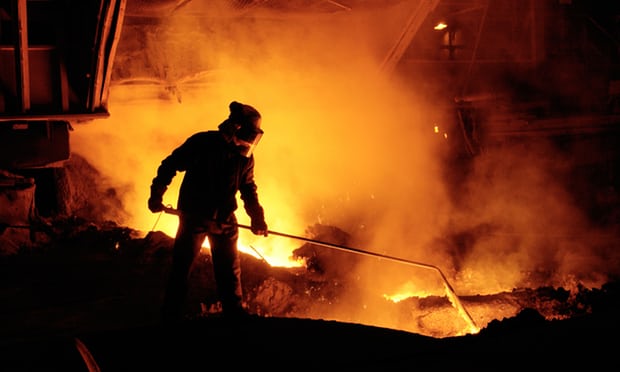 Tata Steel moved back into profit at the start of this year, in large part due to a boost of more than £1.5bn from the restructuring of its pension scheme, prompting unions to demand that cuts to members’ benefits be reversed.

The Indian steelmaker swung to a profit of 146.9bn rupees (£1.6bn) in the three months to the end of March, from a loss of 11.7bn rupees a year earlier. It benefited from a one-off gain of £1.54bn related to the restructuring of its British pension scheme.

Of 122,000 UK pension scheme members, 83,000 opted to join the new British Steel pension scheme (BSPS) – one of the biggest in the country – and took a cut in benefits, in return for investment to secure jobs.

Core benefits were not cut but pension increases under the new scheme were reduced to the statutory minimum. The Community union says effectively increases are now based on the consumer prices index rather than the retail prices index, which means they will be lower.

The remaining members moved to the Pension Protection Fund (PPF), a government-backed pensions lifeboat, which entailed a 10% cut in benefits for most members, except existing pensioners. According to trustees and the Community union, the new BSPS was better for most people than the PPF.

The Pensions Regulator said at the time that such arrangements were rare but necessary in this case to prevent the company becoming insolvent.

The National Trade Union Steel Coordinating Committee, which includes the Community and Unite unions, said the unions had helped deliver the new British Steel pension scheme because “all the experts told us the alternative was the inevitable insolvency of Tata Steel UK”.

“It was always expected the new BSPS would start with a significant buffer to enable it to pay out benefits to all members on a low-risk basis. We should be absolutely clear that this buffer is not Tata’s money, it is scheme members’ money which is ringfenced to pay out benefits over the lifetime of the scheme.

“The surplus for the new BSPS is higher than we expected, which we welcome as it strengthens our case for benefits to be restored.”

The unions have called on Tata and the pension scheme trustees to sit down with them. The first priority for the unions will be improving pension increases for members with pre-1997 service.

The trustees are working on their own formal actuarial valuation of the BSPS, using “prudent assumptions”. This valuation is still expected to show a surplus, but a smaller one than Tata reported.

In February, the work and pensions committee said members were targeted by “vulture” financial advisers during the changes and accused the government, Tata and regulators of failing to protect them from a “major mis-selling scandal”.

Frank Field, the Labour MP and chair of work and pensions committee, said on Wednesday: “This is a promising beginning that offers some hope to the British Steel pensioners, who were left stranded at the mercy of the vultures circling the scheme for too long. Tata should clearly restate its commitment to increase payments to pensions at the earliest opportunity, as agreed with the trustees.”

Stephen Kinnock, the Labour MP whose Aberavon constituency includes the Port Talbot plant, said Tata was “logically and morally obliged to ensure that the benefits are restored to the members”.

“Along with the members I now look forward to seeing a detailed proposal from Tata Steel, setting out how it will set about restoring and redistributing the benefits to the members.”