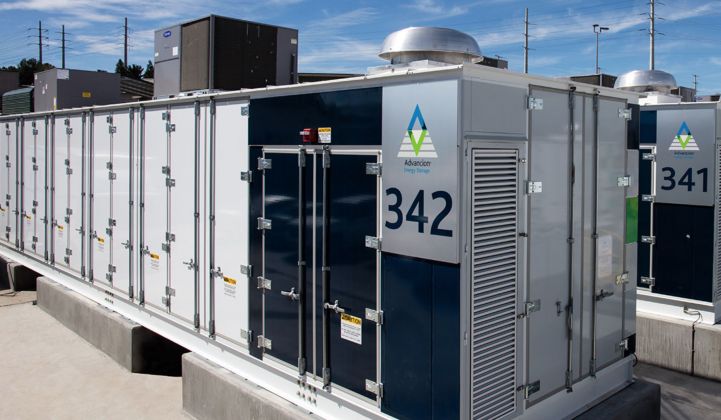 Batteries emerged as a viable peak power resource so quickly that it’s hard to know what happens next.

Regulators in states like California and Arizona have turned to batteries instead of conventional natural gas plants to provide flexible power for evening peaks. They see this as crucial in containing the major cost driver for utilities, and in developing a cleaner, more efficient grid.

The storage industry believes this trend will accelerate quickly. Still, batteries can’t do everything that a gas combustion turbine can do.

A rapid transition to a storage-based peak power system could create vulnerabilities if it’s not done right. Little data exists to indicate what will happen if the peaker-to-storage swap becomes more widespread.

In the meantime, we can turn to a recent report by Ravi Manghani, GTM Research’s energy storage director. He analyzed run-time data from combustion turbines in the field to estimate the potential peak capacity market that storage could replace.

Storage can do more than one might expect. It can’t run as long a gas plant, but durations available on the market today can handle the short peak deliveries of combustion turbine plants. Storage cost declines in the next decade will make it increasingly competitive.

If this research bears out, we can expect a shift in power markets and the carbon and capital intensity of grid infrastructure.

Can it do the job?

That’s the chief operational difference compared to a gas peaker, which can keep generating as long as the gas keeps flowing. Within that constraint, though, storage can deliver peak capacity with aplomb.

Batteries ramp up their discharge faster than a gas plant. They run without dumping pollutants into the air, so they can sit much closer to dense load pockets than a new gas plant.

Not always, but it could for a significant number of cases, Manghani found.

It helps that peakers run rarely. Wood Mackenzie calculates the average peaker plant capacity factor will sit between 6 percent and 5 percent over the next two decades. That’s a low number of hours to replicate.

However, the overall hours in the year don’t matter as much as how many hours the plant runs when it starts up.

To parse that, Manghani pulled 8,640 hours of operational data from four gas combustion turbines: two that exhibit characteristics representative of the 109 gigawatts of U.S. combustion turbine capacity, one in wind-heavy Texas and one in solar-heavy California.

The Troy Energy plant in Ohio, for instance, started 46 times in 2017. It averaged 5.2 hours per start, but had eight starts longer than eight hours, and three starts that lasted longer than 10 hours.

Manghani then compared these operating patterns with different lithium-ion battery systems to see if they can hold up.

Not surprisingly, the four-hour battery systems common in today’s market don’t fare well; they miss most of the peaks that the gas peakers met in 2017. Scale up to 6-hour duration batteries, and they meet considerably more of the peaks. Eight-hour storage does even better.

Those are historical simulations; in real use, grid operators won’t know exactly how long they’ll need their peaking resources.

But the opportunity here is striking: six-hour and eight-hour batteries, which are rapidly entering commercial deployment, could stand in for almost all the starts by peakers that follow median operating behavior. That doesn’t build in any assumptions about breakthroughs in longer-duration storage.

This suggests a new paradigm for peak capacity: storage picks off the peaker roles that fire up least frequently and for the shortest bursts. As batteries take on more of this role, grid operators can maintain gas resources for those prolonged peaks that batteries would not meet. Demand side resources, meanwhile, could tackle those peaks to reduce the amount of generation that’s actually required.

How much business can storage seize?

The operational case studies show that properly sized batteries can step in for gas combustion turbines in most circumstances.

How big a market is this, and how much of it could storage reasonably compete for?

Wood Mackenzie predicts 20 gigawatts of new peakers will fire up in the next 10 years, with most of that coming on the back end of the decade.

Assuming that new capacity follows similar runtimes as existing capacity, the base-case projection sees four-hour storage competing cost-effectively with peakers that run less than four hours on average. That amounts to 6.4 gigawatts representing 32 percent of the new peaker capacity over the next 10 years; most of that opportunity lies in California, Texas and Arizona.

Keep in mind that GTM Research expects the U.S. to deploy only 550 megawatts of storage across all applications this year.

In the aggressive case, though, eight-hour storage becomes economically viable and competes for 82 percent of the new capacity, or 13.1 gigawatts, within the next 10 years.

What’s this mean for everything else?

These are high-level findings; there will be much more messiness in the real-world rollout, where storage will have to compete case by case in markets with wildly different rules and regulations.

In some states, utilities already evaluate storage as a potential peaking resource; in others, the technology plays no meaningful role in grid planning.

What’s clear is that gas is no longer the only game in town. It will retain dominance for plants that routinely run longer than eight hours, but the plants that fire up for short bursts definitely have some new competition. That will likely affect the outlook for new peaker additions.

The data also suggest that utilities building new peaker plants in the coming years should at least scrutinize battery pricing. It might not win out just yet, but it could get close. If the utility can use the storage plant for other grid services outside of peak events, the economics should be even more favorable.