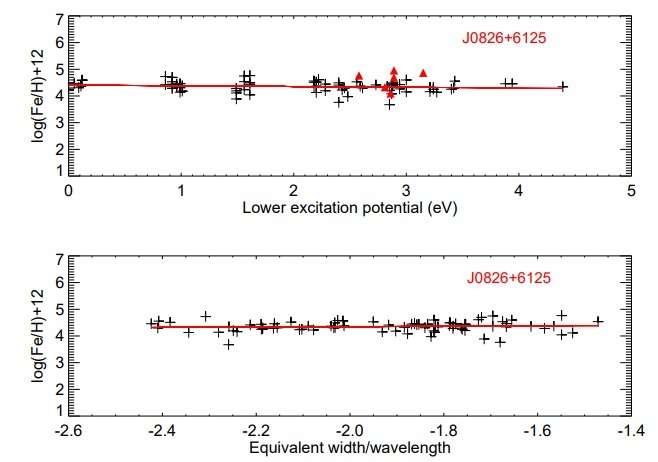 A group of scientists led by Avrajit Bandyopadhyay of the Indian Institute of Astrophysics, Bangalore, has conducted chemical analysis of two bright, extremely metal-poor stars. The results of the analysis, presented May 6 in a paper published on arXiv.org, provide important insights into the nature of these stars, and could help astronomers better understand their origin.

Bandyopadhyay’s team observed both stars with the Hanle Echelle Spectrograph (HESP) on the 2.3-m Himalayan Chandra telescope (HCT) at the Indian Astronomical Observatory (IAO) in India. The observational campaign, conducted between November 2015 and November 2016, allowed the astronomers to obtain essential information about the chemical composition of the two objects.

“In this paper, the first science results using HESP, we present a detailed analysis of their chemical abundances,” the paper reads.

According to the study, SDSS J082625.70+612515.10 (SDSS J0826+6125 for short), with an apparent magnitude of 11.44 and an effective temperature of 4,300 K, has a chemical composition generally consistent with stars in halo of our Milky Way galaxy. It turns out that this star is carbon-enhanced and exhibits depletion in nitrogen, what could be due to internal mixing within the star. Moreover, the researchers found no lithium in the star’s spectra.

When it comes to light elements, SDSS J0826+6125 has a low sodium and aluminum content, however, it is abundant in magnesium. Furthermore, in regards to the star’s abundances of iron-peak elements, the researchers found that it appears is relatively rich in cobalt, but poor in chromium, manganese, and nickel.

SDSS J134144.60+474128.90 (or SDSS J1341+4741) has an apparent magnitude of 12.38 and an effective temperature of 5,450 K. The astronomers found that this star is enhanced in carbon and has a low abundance of lithium. Moreover, it exhibits low sodium and aluminum content together with relatively high magnesium abundance. The observations also detected an over-abundance of chromium and nickel.

According to the authors of the paper, the analysis of elemental abundances for SDSS J1341+4741 suggests that it is the so-called CEMP-no star – a carbon enhanced metal-poor star with no enhancement in r-process or s-process elements.

“At a given metallicity, CEMP-no stars appear to have larger abundances of Cr. This might provide important clues to the nature of the progenitors that contributed to the origin of carbon,” the researchers wrote about SDSS J1341+4741.

The astronomers also noted that radial velocity variations of SDSS J0826+6125 and SDSS J1341+4741 strongly suggest that both stars are members of binary systems.

“The spectra were obtained over a span of 6-24 months, and indicate that both stars could be members of binary systems,” the researchers concluded.