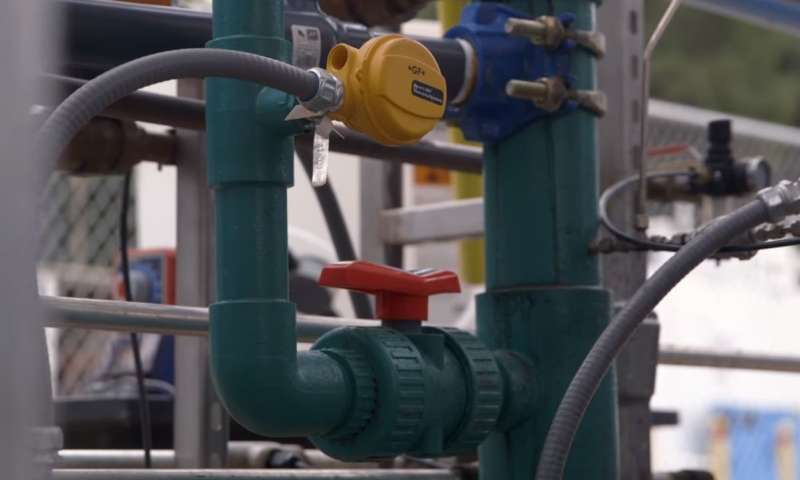 Billions of years ago, when Earth’s atmosphere reeked of unbreathable gases, microbes evolved in the absence of oxygen. As Earth matured and the nitrogen-oxygen atmosphere formed, these anaerobic, or oxygen-averse, bacteria retreated into the mud of the ocean floor and other environments where they would be safe from oxygen-rich air.

Now Stanford environmental engineers Craig Criddle and Bill Mitch are putting these ancient microorganisms to work in the largest demonstration of a more cost-effective wastewater treatment process, supported by a $2 million grant from the California Energy Commission (CEC). Smaller plants based on anaerobic bacteria are currently treating wastewater in South Korea and on the Stanford campus.

Working closely with environmental engineers from Silicon Valley Clean Water (SVCW), a water treatment utility, the Stanford team will help build and operate a small anaerobic treatment plant in Redwood Shores, California, alongside the enormous conventional plant that purifies wastewater for a quarter million people and businesses from Redwood City to Menlo Park.

In addition to cost-effectiveness, the researchers believe anaerobic processing could prove better at filtering household and industrial chemicals out of the waste stream, so that the treated water can drip back underground to replenish aquifers or even, one day, yield water pure enough to irrigate the garden or even quench one’s thirst.

“Anaerobic treatment is a fundamental shift in water recycling technology,” said Mitch, also a professor of civil and environmental engineering.

“The time has come for a technology change,” said Eric Hansen, the Stanford-trained civil engineer spearheading Silicon Valley Clean Water’s involvement in the project. “Taking those blowers out of the process helps to reduce the cost of water recovery and makes municipal treatment operations more sustainable.”

Reducing cost is just one advantage of wastewater treatment based on anaerobic bacteria, according to Sebastien Tilmans, the civil engineer who runs the Codiga Resource Recovery Center on the Stanford campus. At Codiga, which has a smaller version of the technology, the oxygen-averse bacteria clean wastewater and belch out methane. Commonly known as natural gas, this output can be burned as fuel or used as a chemical feedstock to make biodegradable plastics. That, Tillman said, exemplifies a change in thinking.

“The concept of waste doesn’t exist in nature,” he said. “Every byproduct of some natural process is an input for another. All the things we flush down the toilet or into sewers – water, energy, fertilizer – can be recovered as valuable byproducts of the anaerobic process.”

Welcome to the methane world

Anaerobic water treatment technology was pioneered decades ago by Stanford environmental engineer Perry McCarty, now a professor emeritus. But back in the 1950s, when he first began working with these oxygen-averse, methane-making bacteria, energy seemed cheap and inexhaustible. There was no compelling reason to test an energy-saving alternative.

Over the ensuing decades, as costs for energy and biosolids disposal rose, anaerobic processing gradually became more appealing. In 2008, McCarty helped build a unique anaerobic treatment system in the South Korean city of Bucheon that proved highly effective for wastewater treatment. In 2016, Stanford researchers built a slightly larger system at the Codiga facility, which became the first such plant in the Western Hemisphere. The new demo plant at Redwood City will be the largest, and only the third anaerobic treatment plant of this type in the world.

Once in the plant, wastewater passes through a silo of anaerobic bacteria that slowly digest the waste. Water then squeezes through an ultrafiltration membrane to eliminate bacteria and is then clean enough for landscape irrigation and some industrial applications. With the help of advanced treatment systems donated by the Santa Clara Valley Water District and others, the group will also examine the water’s suitability for further treatment prior to reuse as drinking water.

In addition to its energy efficiency, an anaerobic treatment system needs less space than traditional wastewater treatment plants, which require huge tanks and more complex filtration systems. An industrial-scale anaerobic plant might be as much as 40 percent smaller than a conventional plant and produce at least 30 percent less solid waste, a byproduct that currently must be further treated and trucked away, generating additional costs and greenhouse gases.

The researchers estimate that a full scale anaerobic plant capable of operating at 15 million gallons per day might save as much as $3,000 per day in energy demand – $1 million per year – over a comparable aerobic plant. Factoring in other savings from the more efficient process, the researchers estimate a potential savings of over $2 million per year.

Looking to the future

In addition to saving space and money, the Stanford researchers said that their anaerobic process has yet another benefit: the ability to digest pharmaceutical drugs and powerful household and industrial herbicides that have proven difficult for standard aerobic bacteria to digest.

That’s why McCarty thinks the future belongs to hardy anaerobes. “They’ve adapted to the harshest environments on Earth,” he said. “They can eat most anything.”

The demonstration project at Redwood Shores is currently slated to operate until March 2021. Whether the project continues and scales up will depend in part on how well those methane-belching microbes live up to McCarty’s expectations.

“We believe that this prototype system could benefit electricity rate-payers by offering a sustainable approach to wastewater treatment given a successful demonstration,” said David Weightman of the California Energy Commission, which funded this project.

“We’re proposing changing a technology that hasn’t changed in over a hundred years,” Hansen said.