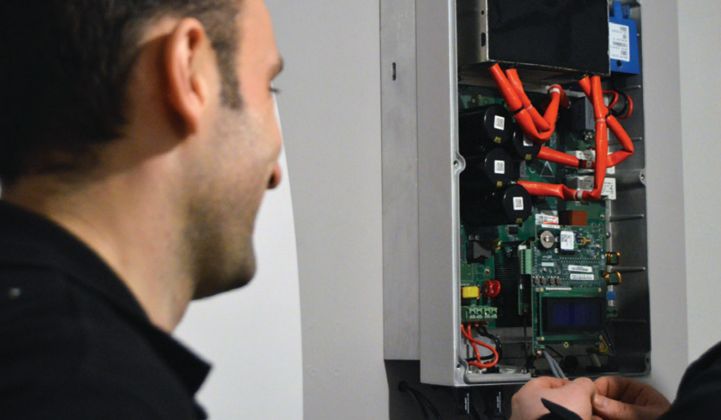 The acquisition of Gamatronic adds UPS and batteries to SolarEdge’s roster, while a cloud VPP platform provides home energy controls across its inverter fleet.

SolarEdge reported record revenues and profitability for the first quarter of 2018 on Wednesday — along with plans to move into markets beyond solar power optimization.

On the energy storage front, SolarEdge announced an $11.5 million acquisition of Gamatronic Electronic Industries Ltd., an uninterruptible power supply (UPS) systems provider for commercial and industrial businesses around the world. CEO Guy Sella noted that the acquisition is the second major step for the company outside the solar arena, the first being last year’s launch of inverter-embedded EV charging systems.

Another came last week, with SolarEdge’s launch of a cloud-based virtual power plant management system, one that could turn its fleet of solar optimizers and inverters into nodes of a distributed energy resource control platform.

In Australia, utility AGL picked SolarEdge, along with Tesla and LG, to roll out its long-awaited residential virtual power plant project, said Handelsman.

These projects are all using SolarEdge’s inverters as the home’s central control point for solar panels, batteries and electric vehicle chargers — constantly updating battery status, solar power output status, household load and other key data, he said. But they also serve as the end node for a cloud-based platform that orchestrates their operation in aggregate.

“You cannot control 10,000 systems separately. Each system has its own capabilities, its own parameters,” he said. “We provide for you the ability to see exactly how much available energy you have,” and how much flexibility is embedded in that fleet, providing the assurance that these distributed energy resources can perform a number of valuable grid services.

For distribution utilities, those could range from reducing load during systemwide peaks, serving as a non-wires alternative, or upgrading a local, stressed-out substation or feeder line — two areas of focus for Green Mountain Power.

For retail energy providers, SolarEdge’s cloud platform could provide the tools to shave costs and increase revenues based on moment-to-moment fluctuations in energy prices, as well as gain market share in the distributed energy field, said Handelsman.

SolarEdge is not getting into the business of aggregating and bidding connected homes into various revenue-making opportunities on its own. “We are not going to compete with our customers. We provide technology and solutions to our customers,” said Handelsman.

Nor does it expect virtual power plants to become a significant portion business in the near future. Sella noted during Wednesday’s conference call that the new VPP service is not expected to “add to our revenues in 2018 in any significant manner.”

“Once they gain acceptance, they are expected to generate recurrent revenues at high margins,” Sella noted. Unlike SolarEdge’s competitive hardware-based business, these VPP services will be embedded in products for virtually no extra cost.

Handelsman noted that the market for these services is still limited by regulatory and economic constructs that make it difficult for customers, utilities and vendors to recover the revenues for the services that the technology can provide. “Most of our existing fleet could be turned on in this fashion,” he noted.

SolarEdge isn’t the first to move into the grid services field. In 2016, chief competitor Enphase unveiled its own grid optimization service, based on early work with utilities such as Hawaiian Electric, to tap its existing microinverter fleet for valuable grid edge intelligence.

Enphase scaled back its work on this and other non-essential lines of business, including its energy storage offering, in the face of mounting losses and increased price pressure from SolarEdge, as well as incumbent string inverter makers such as SMA, Fronius and ABB.

The company also offered second-quarter 2018 guidance of revenues between $220 million to $230 million. Gross margin is expected to remain flat within the range of 36 percent to 38 percent.