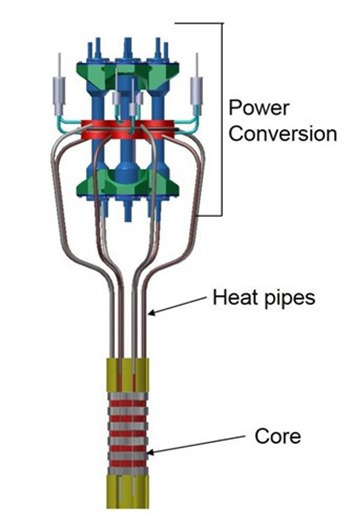 NASA and the Department of Energy’s National Nuclear Security Administration (NNSA) have successfully demonstrated KiloPower, which is a new nuclear reactor power system that could enable long-duration crewed missions to the Moon, Mars and destinations beyond.

NASA announced the results of the demonstration, called the Kilopower Reactor Using Stirling Technology (KRUSTY) experiment, during a news conference this week at the NASA Glenn Research Center in Cleveland.

The Kilopower experiment was conducted at the NNSA’s Nevada National Security Site from November 2017 through March 2018.

NASA officials said they expect the Kilopower project to be an essential part of lunar and Mars power architectures as they evolve.

Kilopower is a small, lightweight fission power that uses passive liquid sodium for heat transfer to stirling engines which produce electrical power. The system as tested is capable of providing up to 10 kilowatts of electrical power – enough to run several average households – continuously for at least 10 years. Four Kilopower units would provide enough power to establish an outpost on the moon or Mars.

According to Marc Gibson, lead Kilopower engineer at NASA Glenn, the pioneering power system is ideal for the Moon where power generation from sunlight is difficult because lunar nights are equivalent to 14 days on Earth.

“Kilopower gives us the ability to do much higher power missions, and to explore the shadowed craters of the Moon,” said Gibson.

“When we start sending astronauts for long stays on the Moon and to other planets, that’s going to require a new class of power that we’ve never needed before.”

According to David Poston, the chief reactor designer at NNSA’s Los Alamos National Laboratory, the purpose of the recent experiment in Nevada was two-fold: to demonstrate that the system can create electricity with fission power, and to show the system is stable and safe no matter what environment it encounters.

The team took the design through a full power 20 hour test. The objective is to work towards certification of the power system for space flight.

“We threw everything we could at this reactor, in terms of nominal and off-normal operating scenarios and KRUSTY passed with flying colors,” said Poston.

The Kilopower team conducted the experiment in four phases.

“We put the system through its paces,” said Gibson. “We understand the reactor very well, and this test proved that the system works the way we designed it to work. No matter what environment we expose it to, the reactor performs very well.”

Flight Qualification is the Goal

The Kilopower project is developing mission concepts and performing additional risk reduction activities to prepare for a possible future flight demonstration. NASA said that the next 18 months of work will determine whether the KiloPower design can meet the rigors of space flight. These challenges include the launch phase and exposure to the deep cold of outer space

Such a demonstration could pave the way for future Kilopower systems that power human outposts on the Moon and Mars, including missions that rely on In-situ Resource Utilization to produce local propellants, water, oxygen, and other materials.