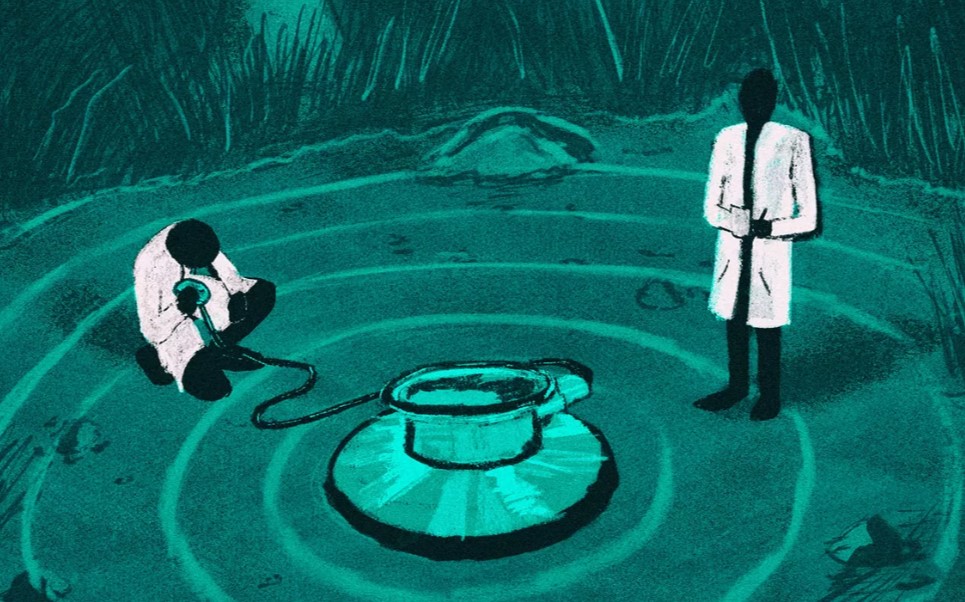 When North Korea tested a nuclear device on September 3rd, 2017, the explosion sent vibrations shuddering through the Earth. About 45 minutes later, a ringing phone in Vienna, Austria, woke seismologist Ezekiel Jonathan just as the sun was beginning to rise. He picked it up and heard his boss say, “We’ve got an interesting event. Can you come up and have a look at the data?”

Jonathan told his family everything was fine, then he raced to work at the Comprehensive Nuclear-Test-Ban Treaty Organization (CTBTO), the international organization tasked with keeping a global watch for nuclear tests.

Established by a 22-year-old treaty banning nuclear explosions, the CTBTO doesn’t make policy decisions or give advice. It’s a watchdog that alerts governments around the world to unusual, earth-shaking events. Although the treaty was finalized in 1996, it won’t be enforced until several countries — including the US, China, Iran, and North Korea — ratify it. Even so, no one has broken the de facto test ban since 1998 — except for North Korea.

On September 3rd, 2017, the CTBTO’s network of sensors registered a massive tremor that started about 400 miles northeast of Pyongyang, North Korea’s capital city. Eight and a half minutes later, smaller seismic waves radiated from the same spot. Quakes can make the Earth hum with vibrations when two giant slabs of the crust suddenly slide past each other — “the same as a clapper hitting a church bell,” the University of California, Berkeley’s Seismo Blog explains. But huge explosions can do the same thing. 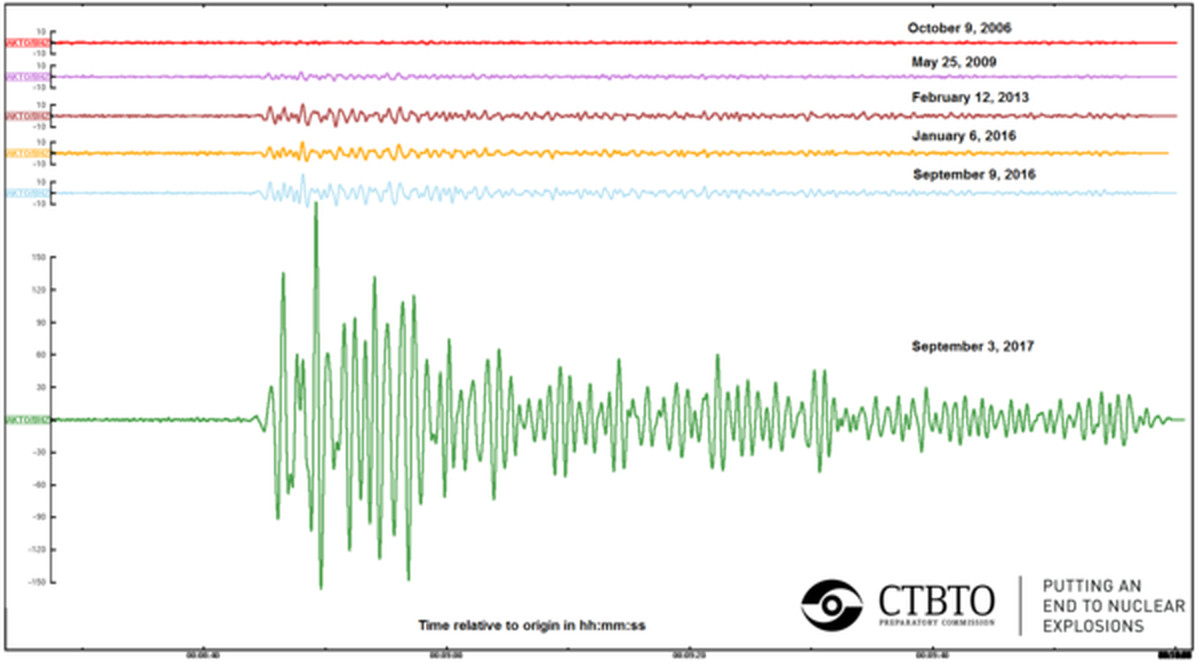 Jonathan’s colleague, Fekadu Kebede Alamneh, beat him to the office — so Jonathan was the last of the team of four to arrive. Alamneh had also received an early morning summons. He’d picked up the phone quickly without knowing who was on the other end of the line. Both scientists sleep with their phones by their bedsides, in part to prepare for a moment like this one. But also because both have relatives who live far away: Jonathan’s in Zimbabwe, Alamneh’s in Ethiopia. The two moved to Vienna several years ago to join the CTBTO’s vigil for clandestine nuclear tests.

The team clustered around the computer monitors. They weren’t concerned with coffee or breakfast. Their job was to make sure that the automated system that had detected the “interesting event,” as his boss had called it, hadn’t made a mistake about the size of those seismic waves, their shape, or where and when they started. The scene is high energy, Jonathan says. “We have just been woken up, so you are really, really curious to find out what is actually happening,” he says. “The last thing you think about is making a cup of coffee.”

Making sure that the data is clean and correct is key because the CTBTO sends that information to the countries that have signed the Comprehensive Nuclear-Test-Ban Treaty — also known as the member states. By analyzing the depth, direction, and types of seismic waves traveling through the Earth, scientists in those member states can figure out whether it was a quake or a blast that sent the seismometers wiggling. And a seismic event starting in the same place as five previous North Korean nuclear tests was certainly suspicious.

“It is a great sense of responsibility that is on our shoulders,” Jonathan says. “If we make a mistake of giving out data or information that is not accurate, it means all our member states are going to come up with the wrong decisions or actions.” When it comes to nuclear weapons, a wrong decision could be catastrophic.

If the Comprehensive Nuclear-Test-Ban Treaty ever enters into force, the organization will have the authority to compel member states to share seismic data with the CTBTO and to enter countries in order to sniff out illicit nuclear testing. But for now, “states that have signed the CTBT don’t have to do anything,” says Jeffrey Lewis, director of the East Asia Nonproliferation Program at the Middlebury Institute of International Studies at Monterey. “Is it Blanche DuBois in a Streetcar Named Desire who has to depend on the kindness of strangers? That’s where they are: they have to depend on the kindness of strangers.”

So the treaty and the organization hang in limbo, preparing for a day when the world’s nuclear powers all agree to support the test ban. That means the team of 260 people working for the organization can only keep watch and pass information on to member states. They can’t go out and investigate themselves.

But they still find themselves called upon the global stage. When North Korea’s leader Kim Jong-un pledged to pause nuclear testing in the lead-up to summits with South Korea’s president Moon Jae-in and Donald Trump, Jon Wolfsthal, a scholar with the Carnegie Endowment for International Peace, wrote that North Korea should prove it by signing the Comprehensive Nuclear-Test-Ban Treaty, in an article for 38 North. He also recommends that the US and its allies “should invite North Korea to host CTBTO inspectors to install monitoring equipment in North Korea.” While that wouldn’t necessarily stop North Korea, it could help discourage future tests.

That’s key for preventing their nuclear weapons program from progressing even more. Nuclear weapons tests are a necessary step for nascent nuclear powers trying to expand their arsenal. Exploding nuclear devices is the best way to test out new designs. Beyond whether or not a device goes boom, explosive nuclear tests help validate the computer modeling, the engineering, and even the underlying physics that go into a making a nuke.

“In other words, that it matches the blueprints,” says Raymond Jeanloz, a professor of Earth and planetary science at the University of California, Berkeley and an expert on nuclear weapons tests. Those blueprints might include plans for nuclear warheads that are small enough to fit onto the ends of missiles, and sturdy enough to withstand the speeds and pressures of flying through the atmosphere to their targets.

Nations like the US and Russia don’t need to test out new designs; they built their arsenals decades ago by collectively exploding over 1,700 nukes, according to the Arms Control Association. Public health concerns about the perils of radioactive fallout eventually led the two countries to agree to a limited test ban in 1963 that barred nuclear explosions in the air, underwater, and in space. “The Limited Test Ban took a lot of the heat off of calls for arms control measures,” Lynn Sykes, a professor emeritus at Columbia University’s Lamont-Doherty Earth Observatory, told The Verge in an interview. “But in fact, testing merely went underground.”

Underground testing makes monitoring more of a challenge because the explosion and its fallout are more or less hidden away. “I’m delighted that there’s no strontium in children’s milk now, but it does complicate our assessment of North Korea’s nuclear tests,” Lewis says.

That’s where earthquake science comes in. The US government has known since the early 1960s that the devices that detect quakes can double as secret nuclear test monitors, according to Sykes’ new book, Silencing the Bomb. The trouble was telling apart the small earthquakes constantly rumbling away beneath the Earth’s surface from the far rarer nuclear explosions. Then, an infusion of cash from the Defense Department in the 1960s helped transform seismology “from a sleepy, poorly supported scientific backwater to a field flooded with new funds, instruments, professionals, students, and excitement,” Sykes writes.

During this Cold War push for better ways to watch other nations building their nuclear arsenals, scientists invented new and improved seismic sensors and installed arrays of these devices around the world. Researchers developed formulas to decipher a nuclear explosion’s size — also known as its yield — and its location from the wiggles of a seismograph.

But even with the tech to monitor a ban of underground nuclear tests, ongoing fights within the US and with Russia over the accuracy of those yield calculations delayed negotiations for a comprehensive test ban, Sykes says. The US and Russia finally signed the treaty in 1996, and Russia ratified it in 2000. But the US hasn’t ratified it yet — and a legally binding treaty remains out of reach.

Still, the Comprehensive Nuclear-Test-Ban Treaty Organization is ready should that day ever come. Right now, the CTBTO oversees an international monitoring system with 151 seismic stations, 11 hydroacoustic monitors to catch underwater nuclear tests, and 50 infrasound detectors that listen for atmospheric tests. There are also 69 radionuclide stations that stand ready to catch any radioactive particles that float by as a result of nuclear tests or accidents.

On September 3rd, 2017, the seismic waves radiating from North Korea reached monitoring stations at different times, depending on the monitor’s location and whether the waves traveled along or below the Earth’s surface. The CTBTO has developed an automatic system that is supposed to use that information to locate the source of the seismic event — earthquake or explosion — and calculate its magnitude. But, Alamneh says, “the automatic system isn’t foolproof.” That’s why analysists like Alamneh and Jonathan are tasked with double-checking it.

As the hours passed and more seismic stations sent their data back to the scientists clustered around the computer, the team stayed late into the evening, releasing their analyses in a series of bulletins. After a day like that, Jonathan says, he went to sleep early. “Because you’re feeling quite exhausted, and then because you have to wake up the next day to work as usual,” he says. Still, the experience was a reminder of why they do this work. “We ensure that the world is safe,” Jonathan says. But more than that, it’s proof of the CTBTO’s capabilities — even as it waits for the treaty to enter into force. “[We’re] showing that this organization can actually deliver. That’s what gives us that sense of urgency,” Jonathan says.

By September 5th, the CTBTO was ready call it: the “event” started within a 42-square-mile patch of rugged terrain that overlaps with North Korea’s nuclear test site. And it was “consistent with a man-made explosion” that shook the Earth with as much energy as a magnitude 6.1 quake.

The CTBTO can’t confirm that the blast was nuclear. That would take detecting the plume of radioactivity that underground nuclear explosions sometimes puff into the air. The CTBTO’s network of sensors are ready to sniff out any radioactive particles released by the test, but so far, none have. And at this point, it’s likely none will. The CTBTO also isn’t speculating about the blast’s yield, or how much explosive energy the device released. That’s not the organization’s job: once it releases its technical analyses and raw data to the countries that signed the treaty, then “it is up to them,” Alamneh says. “From our analysis point of view, we have finished.”

Still, North Korea’s announcement of a successful nuclear test left little doubt: this was the country’s sixth underground nuclear explosion. For Jonathan and his fellow analysts clustered around those computer screens, one thing was abundantly clear: “We could tell that what we are looking at here is much bigger than what we have dealt with before.”