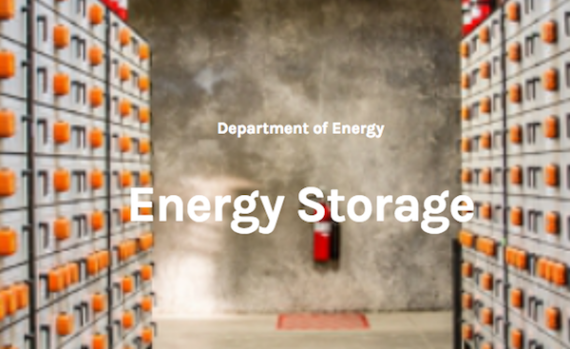 Sure enough, here comes the US Department of Energy with a solution: a newly announced round of $30 million in funding for next-generation technology leading to batteries that can store electricity in bulk for at least 10 hours.

At that scale, energy storage can solve three problems at once: it can funnel more wind and solar into the grid, it can shrink reliance on coal baseload power plants, and it can push gas “peaker” plants out of the picture. Problem solved!

Why Exactly Is The Trump Administration Interested In Bulk Energy Storage?

By the way, 10 hours is just for starters. The new round of funding aims at systems that can shoot electricity into the grid for up to 100 hours, which puts nuclear power on even shakier ground than it is now (that’s a whole ‘nother can of worms).

For those of you new to the ARPA-E topic, Congress breathed the office into life in 2007 during the last years of the Bush Administration, but it wasn’t funded until 2009 under the Obama Administration.

If you’re thinking that breaks down along political lines well, it does — up to a point. President* Trump threatened to kill ARPA-E and he appeared to be on track for success last year, but Secretary of Energy Rick Perry seems to have gotten the last laugh.

Renewables are not ARPA-E’s only area of focus but they’re a big one, and that’s where the 10-to-100 goal for energy storage comes in.

As described by ARPA-E, lithium-ion batteries are fine when it comes to small-to-mid-range storage, but the costs start to mount when you think about scaling up into the 10 hour range and beyond.

That’s going to put a damper on wind and solar integration:

Energy storage will play an increasingly critical role in the resilient grid of the future. Storage systems provide important services, including improving grid stability, providing backup power and allowing for greater integration of renewable resources. Today’s dominant storage options have limitations that inhibit their use as long-duration solutions, particularly their high cost.

Secretary Perry himself pitched the 10-to-100 energy storage goal in a press release announcing the $30 million round of funding last week:

…At DOE, we are peering over the energy horizon and identifying the key technologies we need to support the power system of the future. These new storage options will offer us the opportunity to make the grid more resilient while enabling greater integration of our domestic energy resources.

Got it. In case you’re wondering what “domestic energy resources” means to the Energy Department these days, that’s a good question. Though Perry’s statement doesn’t mention wind or solar integration specifically, elsewhere in the same press release it’s pretty clear that the focus is on wind and solar integration.

The background material for the funding announcement also hammers home the aim of enabling “a greater share of low-cost, intermittent sources of wind and solar in the future generation mix.”

CleanTechnica is reaching out for additional clarification so stay tuned for an update if one is available.

So, what does this all mean?

The problem is getting the cost down, but ARPA-E sees some opportunities there:

…the lower number of cumulative cycles, acceptability of slow ramp rates, and other relaxed performance requirements that are associated with long durations and infrequent cycling provide opportunities for design tradeoffs that may be leveraged to reduce costs and realize economically-viable LDES [long duration energy storage] systems.

So, are you thinking flow batteries will do the trick? Hydrogen? Maybe, maybe not. Here’s one hint:

The primary objective of the DAYS program is the development of LDES systems that deliver electricity at a levelized cost of storage (LCOS) of 5 cents/kWh-cycle across the full range of storage durations (i.e. 10 to approximately 100 hours).

That thing about “full range of storage durations” is critical to the commercial success of the new technology that ARPA-E hopes to introduce.

The problem for utilities is that a lot of the capacity in long-duration storage is going to be hanging around on standby most of the time, where it will not generate any revenue. The goal of 5 cents per kWh-cycle is intended to provide for commercial viability over the lifespan of the system.

ARPA-E makes it clear that lithium-ion batteries are still an important part of the stationary energy storage equation. Costs are falling, and that’s bad news for gas peaker plants in the near future:

…Li-ion batteries are an important benchmark for stationary storage technologies, including those envisioned to provide long- duration storage services. Recent reports suggest that tens of gigawatts of Li-ion capacity will be put in service over the next fifteen years, in some cases serving as a lower cost alternative to simple-cycle natural gas peaker plants.

As for the farther future, Li-ion is going to be facing stiff competition from whatever long-duration storage systems are in the cooker.

And, in case you were wondering whether or not the Energy Department really is serious about pushing fossil fuels out of the grid, here’s a bit more from the agency on that topic:

…Backup power is one example in which tens of hours of electrical energy storage would provide critical services during an extended grid outage associated with a storm or other event. Extended backup power is typically served today with natural gas or diesel generators designed to solely provide backup capacity.

And then there’s this:

Another important application for LDES is the integration of large amounts of intermittent wind and solar in a future (ca. post-2030) regional electricity grid.

Not for nothing but the Department of Energy also notes that “onshore wind and solar photovoltaics (PV) are now the cheapest forms of new electricity generation in the United States.”

In the same breath, the agency blows natural gas right out of the power generation picture:

…the future unsubsidized levelized cost of energy (LCOE) of these technologies will be at or below 2.5 cents/kWh.8 These low prices for wind and solar create a substantial opportunity for the United States, through the reduction in electricity bills and through an increase in the ability to maintain low natural gas prices for use in the chemical industry or for export.