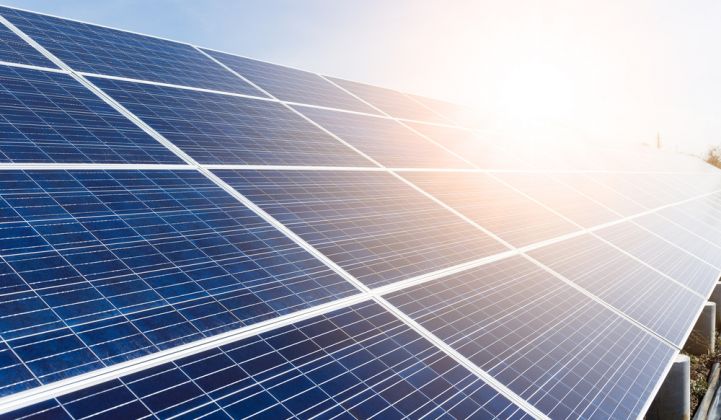 The blockchain is set to take on a new role with off-grid solar developer The Sun Exchange, which aims to use the technology for insurance.

The South Africa-based startup said its Ethereum ERC20-based rewards currency, SUNEX, would be used to create a solar project insurance fund, or SPIF, to cover the cost of relocating PV plants to new sites if the original electricity offtakers defaulted on payments.

This is one area of risk that is not currently covered by traditional insurance products, said Abraham Cambridge, The Sun Exchange’s founder and CEO.

The Sun Exchange acts as a crowdfunding platform for small- to medium-scale solar projects in developing countries, allowing investors worldwide to help fund plants with national currency or bitcoin payments.

Once built, the investors get a share of rental income over 20 years, paid in local currency or bitcoin.

The Sun Exchange has already pulled in funding for five projects, including an 18-kilowatt rooftop solar plant for a Cape Town-based nonprofit and a 60-kilowatt system for an elephant park in Knysna, on South Africa’s south coast.

These and other projects are already insured against fire, damage and theft using traditional insurance products from a range of providers, said Cambridge.

But one risk that cannot be readily covered by commercial insurance products is what happens if a project recipient defaults on payments, he said.

Traditional insurance might cover loss of earnings of up to six months, but insurers would likely have little appetite to pay for the relocation of an entire plant to another offtaker.

The SPIF would aim to cover that risk by allowing investors to pay into a fund that could be used to cover the costs of plant relocation. This could amount to around 20 percent of the capital cost of a project, which typically might be in the region of $80,000 to $100,000.

Cambridge emphasized that the chances of payment default are low. The Sun Exchange carries out a six-point vetting process before agreeing to install a project and has not yet seen any bad debt.

Recipients would usually be relying on the solar plant for daily operations and so would have a strong motivation to keep up payments, said Cambridge.

And although there are no other crowdfunding schemes like The Sun Exchange for direct comparison, Cambridge cited anecdotal reports from off-grid financing bodies such as SunFunder that put payment defaults at less than 5 percent.

Contributions to the SPIF would be voluntary, subject to a one-year minimum commitment, and would be rewarded with up to a 20 percent return, paid in SUNEX tokens, Cambridge said.

The Sun Exchange is aiming to seed-fund the SPIF through part of the proceeds of a SUNEX token sale taking place this month. The money “will in turn be invested in U.S. Treasury bills and other short-term sovereign debt,” said The Sun Exchange, in an explanatory white paper.

“This will create a dedicated collateral pool to protect solar cell owners against project defaults during their 20-year lease contract lifetimes,” it states.

Investors should be able to add to the pot within six months, said Cambridge. Running SUNEX token transactions through blockchain-based smart contracts means The Sun Exchange would not have to worry about administration costs or computer hardware investments, he said.

“The smart contract allows for transparency and it’s autonomous, so we don’t need to manage it,” he noted.

If the SPIF experiment goes well, The Sun Exchange might consider extending it to other types of insurance, Cambridge said, possibly eliminating the need for third-party insurers entirely.

Other companies, too, might want to consider similar schemes for risks that are too niche or too complex for traditional insurers to consider, he said.

At The Sun Exchange, up to 10 percent of the income generated from the company’s solar plants goes toward insurance, he said. “That’s a direct hit to the people leasing the solar panels, because their rental income is net of costs,” said Cambridge.

“By putting this in place, we are improving our core product,” he said. “Self-insuring, I feel, is the way forward, especially in the decentralized industry.”