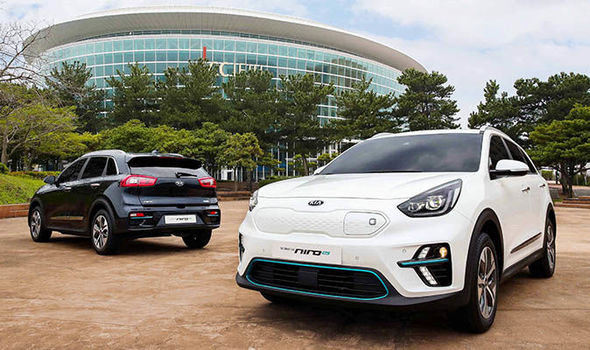 Kia has revealed the first pictures of the all new Niro Electric.

The car was unveiled at the 5th International Electric Vehicle Expo in Jeju, Korea.

It is due to make its official global debut at the Paris Motor Show in September this year, but the carmaker has revealed a few details ahead of then.

Firstly, the manufacturer has given the car a new bumper and air intakes and blue strips, indicative of hybrid models.

The car has also been given a new faux ‘tiger nose’ grille, which is closed off to improve the car’s aerodynamics.

It was designed at Kia’s design centres in California, USA and Namyang, Korea.

The car borrows much of the same design language debuted on the Niro EV Concept which debuted at CES 2018, in Las Vegas, earlier this year.

Kia has also confirmed the car’s range and the two battery pack variants available to buy.

The Niro EV will go on sale in Korea during the second half of 2018 and be introduced to other markets in due course.