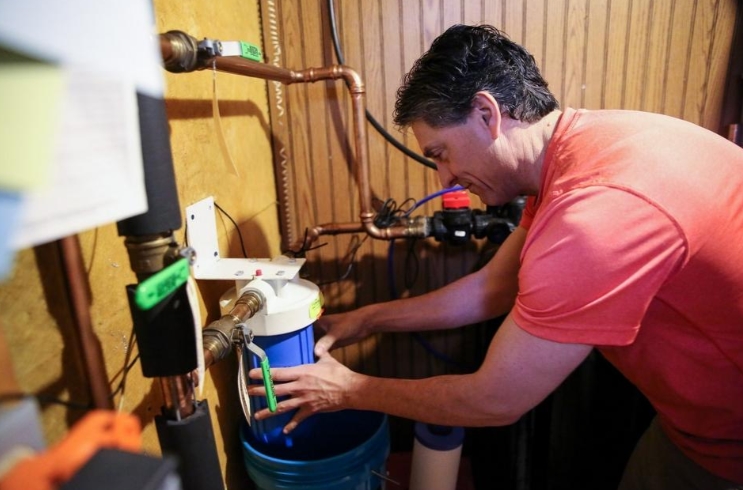 HOLLISTON – Susan Teehan remembers what her tap water was like before she and her husband bought a whole house water filter three years ago.

“The water would come out yellow,” she said. “My kids would be brushing their teeth, and they’d be like, ‘Mom, the water is yellow again.’ It stains your clothes, it stains your toilet, and you could see the buildup on … your appliances.”

For many residents in the southeastern part of town – the neighborhoods served by Well 5 – there is no filter. Discolored water comes out of the kitchen faucet, the shower head and the washing machine.

“I know people on (my) street who don’t have the filter, and they buy bottled water for everything,” said Kathy Youngen, who like Teehan, has a filter installed in her main water line.

“It’s necessary,” he said. “It’s the only way to remedy the dirty water situation.”

The Water Department gets between five and 15 calls per day about the water, he said. The problem affects thousands of residents.

“They’re unable to use their water,” he said.

The plant proposal will appear on Monday’s Town Meeting warrant as a debt exclusion. Should the town vote it down, the cost of the facility will likely be shouldered by rate payers, meaning water bills will go up.

“The way infrastructure should be viewed, if you’re a resident in this community and you don’t have any children in the schools, you still pay for the schools,” Reese said, advocating for the debt exclusion. “It’s a betterment for the entire community.”

Holliston’s drinking water meets state and federal standards, meaning it’s not yet been ruled unsafe to drink, despite the discoloration. Like much of New England, however, Holliston struggles with high levels of iron and manganese, which causes the brown and yellow water.

Milford and MetroWest area department of public works directors have said they think the federal and state governments will soon regulate manganese more strictly, for public health reasons. Several towns already have treatment plants that filter out iron and manganese, and the two plants in Holliston remove the minerals for other wells.

“The EPA has enough studies, and they know there are adverse health effects … They will limit it,” Reese said, of manganese. Should Holliston voters approve the treatment plant, “at least Holliston will be ahead of the curve when it comes to that.”

If the town takes no action on its discolored water, Reese said, the state is likely to eventually step in and order a solution.

“If you delay, it’ll be more and more expensive,” he said.

The debt exclusion needs both Town Meeting and town election approval. If approved, it could take two years before a new facility is up and running.

“We want it to be safe,” said resident Marcie Randall. “We want to drink a glass of water from the sink and feel safe about it.”

Town Meeting kicks off at 7:30 p.m. Monday in the High School auditorium. The town election is Tuesday, May 22.

Residents with whole house water filters in town know it’s time to change their filters when their water pressure drops, indicating the filters are so clogged the water can’t get through.

It takes between four and six months. The filters go in white, and come out slimy and black or chocolate brown.

“You realize how grossed out you are every six months,” resident Kathy Youngen said.

Whole house filtraton systems range in cost from about $500 to more than $3,000.