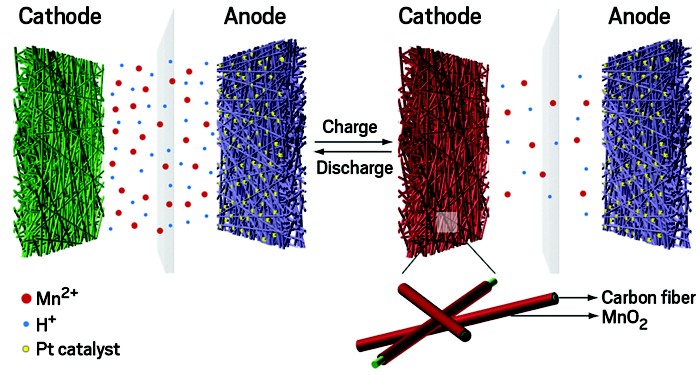 A new battery made of manganese and hydrogen could be easily scaled up to store energy for the grid, researchers say. The battery houses a large amount of energy, lasts a long time, and could be inexpensive enough for the job.

Finding the perfect battery for grid storage remains a holy grail for researchers. The ideal grid battery should pack a lot of energy into a small volume and, per the U.S. Department of Energy’s requirements, store each kilowatt-hour of energy for $100 or less. It also needs a long life, says Yi Cui, a professor of materials science and engineering at Stanford University. “You want them to run for 10,000 charging cycles or more, so they can last 25 years.”

Most current battery technologies fall short in at least one area. Lithium-ion batteries that power laptops and electric cars have energy densities of over 200 Wh/kg, but they cost more than twice the DOE requirements. Redox-flow batteries are also expensive. Meanwhile, lead-acid batteries are cheap, but they last only 500 cycles and their energy densities are subpar. Researchers have recently made low-cost batteries with aqueous solutions of zinc and sodium ions as electrolytes, but they also suffer from low energy density and short cycle life.

The new battery has an anode made of carbon-fiber-based fabric loaded with platinum catalyst. The cathode is a plain carbon fabric, and the electrolyte is an aqueous solution of manganese sulfate. When the battery charges, hydrogen gas bubbles up as the platinum catalyst reduces water at the anode. Meanwhile, manganese ions from the electrolyte combine with the oxygen and deposit on the cathode as solid manganese dioxide. The reverse happens during discharge: manganese ions dissolve back into the electrolyte, hydrogen gets oxidized to form water, and electrons travel through the external circuit.

To make a battery cell, the researchers roll a piece of the cathode and attach it inside a stainless-steel cylinder about the size of a standard C battery. They clamp a small anode in the middle of the vessel, fill the gap between the electrodes with electrolyte, and seal the cell.

“The device is already much bigger than ones usually tested in laboratories and is highly scalable,” Cui says. Practical devices will include large, pressurized steel tanks to hold hydrogen.

“Tank size will be a critical consideration,” says Ping Liu, who designs materials for energy storage at the University of California, San Diego. “Tanks are costly and bulky.” Nevertheless, he adds, “these aren’t insurmountable issues. If they can find a solution, then material cost is extremely low.” The team has developed low-cost catalysts to replace platinum and is now experimenting with other cathode materials to further improve battery performance.