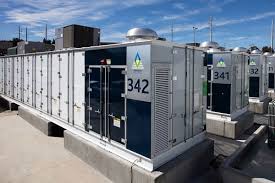 A private power company has unveiled WA’s biggest battery, which will store enough electricity to power 50,000 homes and be located in the heart of the State’s lucrative iron ore industry.

In what it believes will be a portent for the future of the electricity system, Alinta Energy yesterday launched a 30MW lithium iron battery attached to its Newman power station in the Pilbara.

The project, which cost $45 million to build, was delivered by South Korean company Kokam and comprises 100 individual batteries each capable of powering the typical home for 90 days.

While the battery was ostensibly designed to ensure Alinta could provide more reliable power to Gina Rinehart’s Roy Hill iron ore mine, 120km to the north east, the company indicated it was a sign of things to come.

Ken Woolley, Alinta’s general manager of merchant energy, said batteries were looming as a crucial part of the electricity grid, especially as greater amounts of renewable generation came on stream. This was because batteries could almost instantly balance competing forces on the system, whether it was the wind not blowing, demand suddenly falling away or a power plant tripping.

Mr Woolley predicted the integration of big-scale batteries into the grid would only gather pace as technology advanced and costs came down. He flagged plans to build one in Port Hedland, where the Hong Kong-owned company has a 200MW power station.

“Over time it will become more commercial,” Mr Woolley said.

“There is no doubt that battery is going to be seen more and more and not just in this country.

“It’s already been seen right round the world … in large, utility-scale grids in the US, in South Korea, elsewhere in Europe.”

In the case of the Newman installation, Mr Woolley said it was hoped the battery would shave millions of dollars of its annual gas bill by allowing it to run the plant more efficiently.

Regional Development Minister Alannah MacTiernan said the launch of the Newman battery highlighted the potential for the technology to change the way power was delivered.