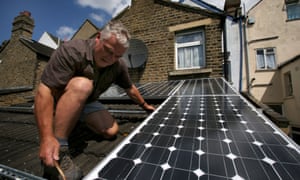 The home of the future looks an increasingly attractive place to live this week, after millions of households received the unwelcome news that their energy bills were going up again.

Switching supplier is one quick fix to rising bills. But in the long run, industry players say the answers may lie in a coming revolution in how we use energy in our homes, turning them into mini power stations and reducing our reliance on energy companies such as British Gas and EDF.

For consumers, cost and convenience will be big factors. For energy firms, there is a chance to rebuild trust and transform themselves from mere suppliers into more profitable service companies. As a report said last week, there also needs to be a debate about how homes can be heated in new ways that reduce their contribution to climate change.

Most industry experts think that future homes will consume less energy – setting aside the impact of electric cars – as appliances from fridges to boilers become ever more efficient. New buildings are also increasingly airtight, which the Building Research Establishment says has largely been driven by regulations.

British Gas owner Centrica, the UK’s largest energy supplier, and Ovo, one of the biggest “challenger” firms, both told the Observer they expected domestic energy use to continue falling.

Customers will not just consume energy, but generate it too, becoming “prosumers” – “a horrible word but a useful term,” says Tom Pakenham, head of electric vehicles at Ovo, that means “to generate your own energy, store it and use it in intelligent way”.

For most people, this will mean solar panels generating electricity, which is not a new trend – more than 900,000 households already have solar, up from almost none a decade ago.

What is new is that consumers are beginning to pair solar with batteries, to store and either use or export the electricity when it makes the most financial sense.

Such installations are not officially monitored, but the Solar Trade Association estimates 5,000-10,000 UK homes now have energy storage, fitted by companies including Tesla, E.ON and Nissan. Imperial College has said cheaper home batteries will be a game-changer for utilities.

But energy stored at home might not automatically be consumed by that household. “You may decide I’ve got excess energy and my personal preference may be to donate that to a vulnerable household down the road,” Tudor said.

Centrica has installed about 1.6 million of its smart-home Hive devices, taking on tech titans such as Alphabet-owned Nest, which pioneered smart thermostats.

But the company is already looking beyond smart thermostats, lights and plugs, which its data suggests are cutting an average home’s energy use by up to 12%.

“We are looking at how we can take this further: we expect adoption of the ‘internet of things’ will make more devices smart. You could load your dishwasher and you press start and it does a calculation – you want it ready by 7am, let the machine decide when to start the cycle, depending not just on pricing but on [energy] grid efficiency,” said Tudor.

Smart meters, which the government aims to have offered to every home by the end of 2020, are also seen as key to enabling much of the technology and new pricing.

“You cannot have an intelligent energy system without smart meters,” said Pakenham.

The meters will enable more dynamic pricing, where bill payers are charged less for energy at certain times of day, to reduce costs and pressure on the power grid.

Other digital technologies are making peer-to-peer energy trading a reality. Last week, a startup called Verv used blockchain for the first time to execute a physical trade of energy on an east London estate, from a rooftop solar array on one block to a resident in another block.

Dermot Nolan, chief executive of energy regulator Ofgem, believes peer-to-peer trading is one of the most exciting new business models in energy.

Suppliers such as British Gas, instead of just selling gas and electricity, will look to manage how energy is used in the home, and deal with its relationship with the outside world – handling trading, or managing a household’s electric car battery to help the grid in return for payments. “We say we can make this more convenient for you,” said Tudor.

We may even no longer buy energy, but comfort instead. In one trial of about 100 homes by the government-funded Energy Systems Catapult, people pay not based on usage but by picking a temperature and the number of rooms they heat.

“What we see is companies adding value for customers, rather than being someone they just have to have,” said John Batterbee, Energy Systems Catapult chief engineer.