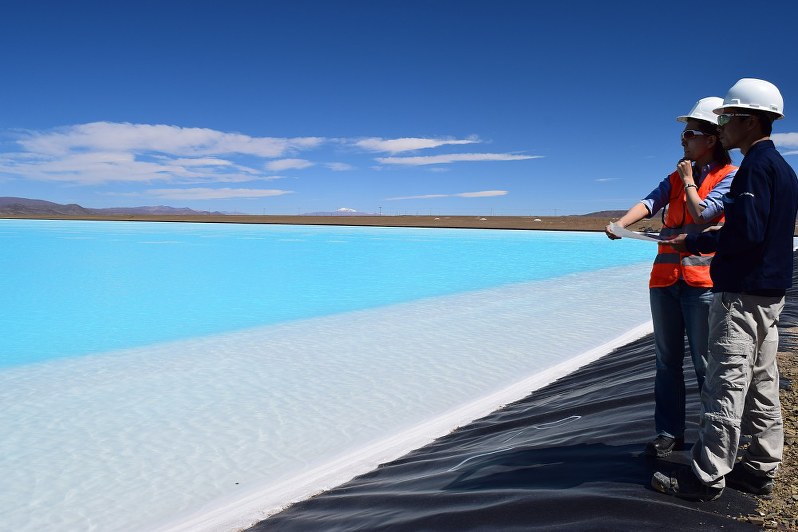 A lithium-producing area here in the South American Andes has been attracting the attention of numerous Chinese firms determined to secure a firm grip on the emerging lithium industry in the region.

Lithium, which is abundant in this part of the Andes, can be used in a range of devices including rechargeable batteries for electric vehicles (EVs). The rare metal is tipped to represent a “next-generation industry,” meaning that this particular corner of the world is set to have a strong influence on foreign investor activity.

Jujuy Province is located in the northwest of Argentina. A Mainichi Shimbun reporter recently visited a lithium factory there, having arrived in the province after a two-hour flight from the capital Buenos Aires followed by a four-hour drive. The factory, located some 4,000 meters above sea level, is jointly run by Australian and Japanese firms. A stunning deep-blue lake spread out near the factory, providing a breathtaking backdrop, but the thin air due to the high altitude was headache-inducing.

Jujuy Province is situated in region known as The Lithium Triangle, which straddles the national borders of Argentina, Chile and Bolivia. Development in the region, connected to the rare metal, is steaming ahead.

The lithium factory, which Japan’s Toyota Tsusho Corp. is involved in, pumps groundwater containing lithium from a salt lake the size of Osaka city, and then dries the water under the sun for about one year, across 18 artificial lakes. Once the groundwater has dried, the resulting powder is then shipped on.

“This location is ideal for lithium production as it is positioned above the clouds, meaning lots of fair weather,” says 36-year-old Kenta Iguchi, a Toyota Tsusho employee posted in the region.

The price of lithium has approximately doubled over the past 2 1/2 years. China has been buying the rare metal at a rapid pace, in an attempt to use lithium to power EVs, as it tries to dominate the global automobile market.

China’s connection with the element has become so strong that two of the world’s five major lithium developers are now Chinese, off the back of aggressive acquisition and investment strategies.

Of these two giants, Ganfeng Lithium Co. has teamed up with the Canadian company International Lithium Corp., founded by Kirill Klip. As Kilp explains, “A lithium battle has started, and China is right in the middle of it.”

Jujuy Governor Gerardo Morales says, “China leads the pack in terms of lithium development and investment. All new ventures go through the Chinese Embassy here. So in other words, all investment is determined by the Chinese government.” Morales adds, “Lots of Chinese people have come here. Too many in fact.”

There is no doubt that the relationship between China and Jujuy is deepening. Near Toyota Tsusho’s factory, a major Chinese firm is building a new factory as part of a joint venture, and the site is visited by high-ranking government officials. China has also promised cooperation in the fields of science and technology, as sought by Jujuy.

“We also want to engage in technological collaborations with Japanese and German companies. However, the only Japanese company to have come here so far is Toyota Tsusho,” Morales says.

Argentina has the world’s leading reserves of lithium, and the country’s president, Mauricio Macri, is actively encouraging foreign investment into regions that produce the rare metal. Some say that the 21st century will be the “lithium century,” following on from the previous “oil century,” and that “Argentina will be the next Saudi Arabia.”

During a visit to Argentina’s Secretary of Mining Daniel Meilan in Buenos Aires, a pile of proposals from mining companies based in countries such as China, France, Canada and Chile could be seen. “Lithium is in demand right across the world. We don’t just want to be the world’s No. 1 lithium producer, we also want to be strong in terms of rechargeable battery technology,” Meilan explains.

The difference in price between lithium powder and lithium ion batteries, is about 1 to 100-200 times per unit weight. Exporting lithium alone is not economically effective. However, by creating areas that can produce rechargeable batteries, which have high added value, a large number of jobs can be created in the country’s mountainous areas, which are lagging behind.

“The aim is to develop new rechargeable battery technology and related materials, and compete with the rest of the world,” says a 31-year-old lithium-related researcher based near to the city of Jujuy.

Also undergoing development are methods to shorten the time it takes to condense and dry lithium, using solar-powered electrolysis.

“At the moment, interest in lithium is limited to just a few companies, but the development of new technology will bring sustainable prosperity to the region,” says Ernesto Calvo, an academic.

However, conditions are also being attached to development geared toward improving the lithium industries of related countries. Bolivia, for example, which is in the Lithium Triangle, has asked countries that want to get involved to contribute toward the development of rechargeable batteries.

Looking ahead, Klip predicts, “Lithium-producing nations will ban exports of lithium, and only export rechargeable batteries. If that happens, China will monopolize lithium because of its vested interest in the product.”

If the price of lithium hits the roof due to low supply, China and only China will be able to secure cheap lithium, and proceed with development of rechargeable batteries and EV. That is the predicted scenario that is being quietly talked about by those in the know.