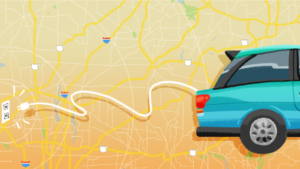 The traffic was bad. It was raining. The windows kept fogging up. And there was no guarantee that a public charging station would be available when she got to her destination.

My cousin recently told me about the stress of taking her parents’ e-Golf, a Volkswagen electric vehicle, to see a show about 30 miles away. Even if she’d overreacted to the possibility of running out of charge (the e-Golf has about a 100-mile range), she decided her next car wouldn’t be electric.

A few weeks later, she bought a Honda Fit. She brought it over for a ride around my block, touting its great gas mileage, relieved to forget about her charging worries.

What my cousin experienced is nothing new. Range anxiety — a constant nagging feeling that your electric vehicle (EV) doesn’t have enough juice to cover your trip or make it to the next charging station — has followed drivers since the advent of consumer battery-powered vehicles. It’s similar to stressing about your cellphone battery not making it through the day without a portable battery or charger and outlet handy.

Limited charging infrastructure and range limitations are something of an Achilles’ heel in the electric car industry. “Everything about electric vehicles is awesome except plugging them in sucks,” Alex Gruzen, the CEO at wireless car charging company WiTricity, said in a phone call.

Electric car makers continue to expand and improve their charging networks and apps to map and find charging spots, so range anxiety should start fading, but it’s not an instant fix.

Carmakers adding electric options to their fleets are building out individual charging networks: Volkswagen, Jaguar, Porsche, BMW, and others have all laid out plans to electrify dealerships and add charging stops. Tesla, known as the leader of the EV pack, offers thousands of charging stations, including fast supercharging stations, through its nationwide network. It also aims to produce a million electric cars by 2025.

The U.S. Energy Information Administration’s Annual Energy Outlook report for 2018 projects an ongoing increase in EV sales — from less than 1 percent in 2017 to 12 percent of all vehicle sales in 2050.

Electric vehicle charging network ChargePoint found in its annual report that 200,000 EVs were sold in the U.S. in 2017 — the highest number ever. The network also added 10,000 charging locations, bringing its total to 45,000 charging spots nationwide. But as EVs go mainstream (currently they’re only about 1 percent of the car market) charging stations need to keep up. California alone announced a target of 5 million zero-emission vehicles by 2030.

Across America, drivers can find more than 150,000 gas stations. Chevy Volt owner Adam Green, 34, in Phoenix, thinks chargers could fit into existing gas station infrastructure. “Right now there isn’t enough demand to have charging stations everywhere,” he said in an email. “It would be great if a couple could be found at gas stations.”

But as WiTricity’s Gruzen explained, relying on battery power requires being proactive — planning to charge ahead of time to have enough range — instead of reactive, i.e., running low on gas and finding a nearby gas station. It’s hard to facilitate that type of change.

Speech pathology grad Lindsay Downs, 27, drives her all-electric 2011 Nissan Leaf in the Los Angeles suburb of Simi Valley with minimal charging issues while out and about. Every so often the charging spot at her usual shopping mall is unavailable, but she can usually find somewhere to charge if she’s low on battery. She thinks more people would go electric if they could change their paradigm and realize they would never have to fill up again. “Changing the way you think is just hard for people in general,” she said in a call.

Daniel Imbeault, 52, in Quebec, experienced the difficulty of changing how he thought about cars and “re-fueling” after going from a lifetime of gas cars to a 2016 Nissan Leaf. “With my gas car, I just start the engine, put it in drive, and go. Need gas? Stop at the next exit, fill it up, and go. That’s it, no big deal. No anxiety at all … I can refill anywhere! But electric is a completely other world,” he wrote in an email.

EV advocate and Tesla driver Don Burke, 52, thinks of electric vehicle adoption as a movement. Eventually the infrastructure will grow and make electric cars an easy purchase. “This largely is a supply and demand framework,” he said in a call. “As more EVs come into market, the supply side will increase to meet that demand.”

The biggest barrier to purchase is charging fears, he said. “Everyone thinks they’re always going to be thinking, ‘How do I find a charge?'”

Many EV drivers say their range anxiety has been abated after owning and seeing the benefits of driving a battery-powered, emission-free car. But look at 31-year-old stay-at-home dad and consultant Tom Levron, who shared how much brain power he puts into his Honda Fit EV driving habits in San Diego, California, a market that incentivizes EVs with tax breaks and rebates.

In an email he wrote, “The way I avoid the anxiety is charging the car at night… charging during the day when I get back from errands in case I’ll need to go out again, planning my day and leaving time for a charge when there are free public charge stations — like at my local grocery shop and just knowing my limits, before I head out on errands I map out to see that it’s all within range there and back.”

That’s a lot of low-level planning, and while admittedly it’s not that complicated, it’s a lot more thought than most people put into getting around.

ChargePoint, PlugShare, and other EV networks and individual electric carmakers offer robust tools and apps for phones and within car consoles to alleviate any anxiety. But these maps and trip planners can’t make more charging stations appear.

Looking at a list of the most scenic, quiet routes in the U.S. based on GPS tracking transportation company Geotab’s calculations, it still seems daunting to take your EV on what should be a relaxing, less congested ride. One of the quietest roads in America is U.S. Route 50 through Utah. To a gas car driver, it’s a stretch of limited services with a handful of gas stations, but for an EV owner, this scenic route is anxiety-inducing.

The charging infrastructure is just not there yet. And with these service gaps, range anxiety will persist — even as battery technology improves and as charging stations become as ubiquitous as gas stations. Eventually that stress will fade as more drivers know they can plug in and unplug those charging worries wherever they go.