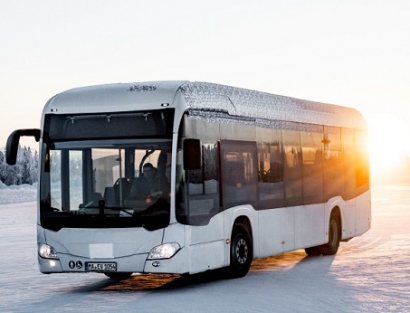 Akasol, based in Darmstadt, Germany, is now manufacturing lithium-ion battery systems for Daimler subsidiary EvoBus. The company plans to launch its new electric bus Citaro at the IAA Commercial Vehicles in September.

These buses will be fitted with up to ten of Akasol’s AKASYSTEM OEM battery packs (max. 243 kWh). The technology combines high demands on performance charging and discharging, energy density and lifespan.

Series manufacturing of the Citaro bus will start this year. Akasol opened a serial production plant for commercial vehicle battery systems in Langen, Germany, in the fall of 2017. The facility has a yearly capacity of up to 300 MWh. According to the company, they believe this is Europe’s largest production plant for commercial vehicle lithium-ion battery systems.

Tests of the AKASYSTEM OEM battery systems for EvoBus have run since 2015.

“It was a great challenge for our company to meet Daimler’s high requirements on one of the most important components of electric power trains. I say this not just with regard to developing the product, but also considering the needs of serial production,” comments Sven Schulz, Managing Director of Akasol GmbH.

According to a recent study there are currently 200 electric buses, but more than 20,000 diesel buses, operating in public transport in Germany. This year the number of electric vehicles could double and some cities are announcing that by 2020 they will only deploy new, emission-free vehicles