Global automakers are gearing up to produce batteries for electric and hybrid vehicles in Thailand as a booming market and strong government incentives boost local output of environmentally friendly cars.

Germany’s Daimler looks to open a 48,000-sq.-meter battery plant by early 2019 under its Mercedes-Benz unit. The factory will assemble batteries to supply the luxury automaker’s Thai electrified vehicle operations as it prepares “for the future of mobility,” said Andreas Lettner, CEO of Mercedes-Benz Manufacturing Thailand.

At present, Mercedes makes all of its batteries at a single German plant. It plans to expand its battery assembly network to six locations worldwide — three plants in Germany and one location each in the U.S., China and Thailand — over the next several years. The Thai project will take up part of the 100 million euros ($123 million) Mercedes plans to invest in the Southeast Asian country by 2020.

Electrified cars, a relatively pricey technology, have been slower to catch on in neighboring markets. But those countries could join the battery supply chain as automakers bring related operations to Thailand. 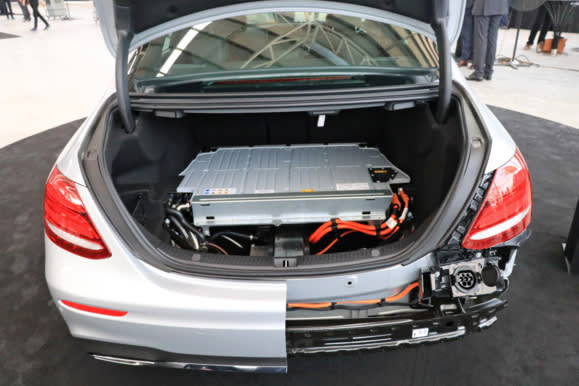 Mercedes’ German rival BMW will add a battery factory of its own in Thailand’s Rayong Province — its fourth after plants in Germany, the U.S. and China. BMW makes four models of plug-in hybrids in Thailand, and sold 1,300 of those vehicles here in 2017.

Toyota Motor aims to begin making batteries in Thailand as soon as 2020, building what will be its first fully owned battery plant outside Japan.

Assembling batteries in Thailand will help these companies maximize tax breaks and other incentives for electrified vehicle production from the government. These policies reward automakers for making at least one of their vehicles’ core components, including motors and batteries, in Thailand.

The plants will still rely on imported battery cells that will be installed into battery packs. Toyota, for example, sources cells from subsidiary Primearth EV Energy, a joint venture with electronics giant Panasonic that makes the parts in Japan and China and supplies operations around the world.

But Thai renewable technology company Energy Absolute could change that with a massive battery cell plant expected to open in 2019. The facility’s $100 million first stage would be able to turn out 1 gigawatt-hour in cells each year using technology from Taiwanese partner Amita Technologies. Energy Absolute aims eventually to raise that to 50GWh — enough to supply 1.25 million of Nissan Motor’s Leaf electric compacts. The U.S. “Gigafactory” run by Panasonic and Tesla, in contrast, is slated to reach only 35GWh at maximum capacity.

Energy Absolute will use its own funds for the first phase of the project, though a partner may become necessary later, CEO Somphote Ahunai told Nikkei. The company aims to supply automakers assembling batteries in Thailand, he said.

The Thai manufacturer will have to fend off Chinese rivals if its ambitions are to be realized. Battery makers in Asia’s largest market are seen accounting for three-quarters of the world’s roughly 450GWh cell production capacity in 2020, according to IHS Markit. Concentrated production in China could make that country’s battery cells highly cost-competitive on the global market.