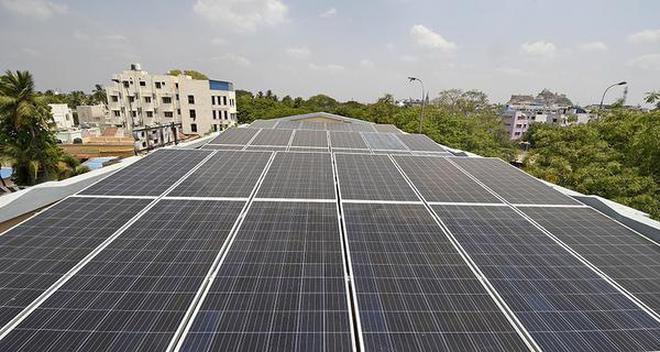 At a time when the Tamil Nadu Energy Development Agency (TEDA) has come up with a subsidy scheme for the consumers to set up solar panels, the Tamil Nadu Generation and Distribution Corporation (Tangedco) has shown the way by installing 30 KW rooftop solar power panels on its office of Chief Engineer in Tiruchi.

It has been established at a cost of ₹15.75 lakh under the Integrated Power Development Scheme (IPDS). The system has already been commissioned.

Tangedoc hopes to meet the day-to-day power requirement of the office by the non-conventional energy sources. The entire terrace of Chief Engineer’s office, which is the headquarters for the Tiruchi region comprising eight districts, has been used for establishing solar panels.

As many as 96 solar panels have been set up, at a cost of  52,000 each. The capacity of each panel is 315 watt. Provision has been made to transmit the excess power to the grid.

“With the commissioning of rooftop solar power panels, we are able to meet the power requirement of our office. We use only about 50% of installed capacity,” says M. Valarmathy, Chief Engineer, Tamil Nadu Generation and Distribution Corporation, Tiruchi.