Orders have been steady for Temporal Power since it began, and domestic sales have included flywheels for grid regulation and power regulation. 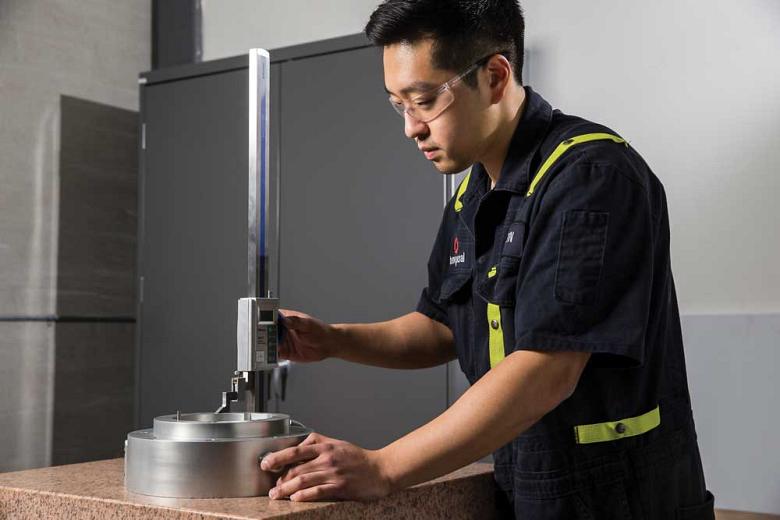 Mississauga, Ont.-based Temporal Power has been producing colossal steel flywheels for the energy storage market since 2013, using its own facilities and a group of North American subcontractors.

Producing a 4,000-plus-kg steel flywheel from raw ingot to finished product, while ensuring that it’s balanced to the same ISO standards that apply to navigational gyroscopes, is no easy feat. But Temporal Power has found a way with a team of exceptional subcontractors and the ingenuity of its own workforce.

The company has been producing and selling its massive energy storage devices to domestic utilities for several years, and in 2017 it celebrated the huge step of receiving its first international order.

Energy storage is one of the planet’s most urgent tech problems, and it’s expected to become a multi-trillion-dollar industry.

Flywheels make excellent energy storage devices, basically functioning as mechanical batteries that store kinetic energy in their rotating masses (rotors). During “charging,” the flywheel motor uses power from the grid to spin the rotor at high speed. On discharge, the flywheel slows down, its inertia driving the motor to act as a generator, adding power back to the grid.

Through their ability to efficiently balance energy and control energy frequency by rapidly absorbing or generating power, flywheels improve power quality and lower overall energy production and management costs. They are especially valuable for regulating power from renewable (and obviously variable) sources like wind, providing grid stability services such as frequency response.

Spinning in a vacuum

The rotor, which weighs in at more than 4,000 kg, has a rotor surface speed that exceeds the speed of sound at 12,000 RPM. Friction is minimized (and therefore energy losses are less than 1 kW) because of the use of a permanent magnet at the top of the flywheel, which provides magnetic levitation for the flywheel and minimizes the axial load on the flywheel’s bearings.

Steel is the material of choice because it’s easily obtained, relatively inexpensive, lends itself well to magnetic levitation applications, and enjoys an extremely wide body of metallurgical knowledge. It also offers excellent durability and defect testing in comparison to materials like carbon fibre, and it is completely recyclable. The lifespan of the entire flywheel system exceeds 20 years with minimal maintenance.

The process: An overview

Much of the manufacture of the flywheels is executed by Temporal Power’s supply chain, all coordinated by Director of Production Pieter de Koning, an engineer who also has an MBA. 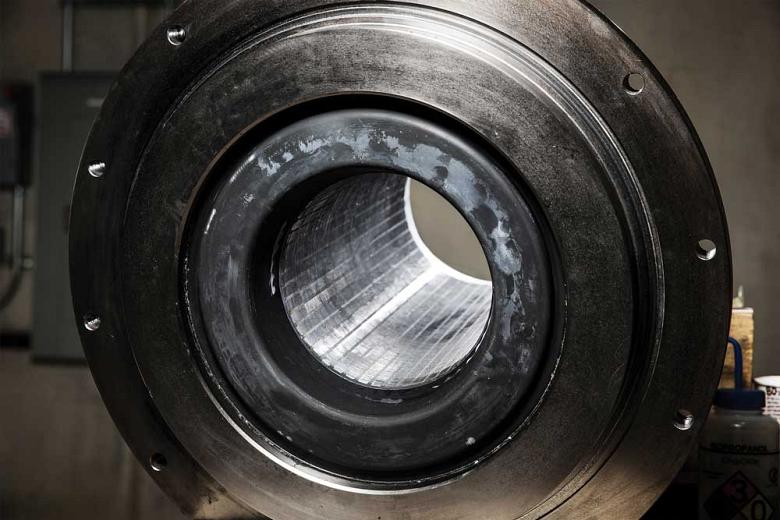 Stacking laser-cut parts inside the motor is just a single step in many installation tasks.

At the company’s Mississauga plant, mid-process assembly and final assembly focus on critical processes tied to the company’s trade secrets, including the all-important step of rotor balancing and run testing.

“We are not going to duplicate electroplating or forging here,” said de Koning. “It’s just wouldn’t make sense when there are excellent facilities that specialize in those processes close by. This isn’t a ‘straight line’ manufacturing process either. Each part of the system has its own unique manufacturing process, including specialty materials management.”

Because Temporal Power is producing a new and unique product, manufacturing requires the involvement of a variety of skills and disciplines, from metallurgy and machining to thermodynamics, hydraulics, and control engineering.

The main parts of the finished flywheel are the rotor, motor generator, levitation magnet, frame, and cooling system. In total there are 615 line items, including steel forgings; cast-iron parts; aircraft-grade aluminum pieces; sheet metal pieces, and many types of fasteners, sensors, and other electronics parts.

“Probably 60 to 65 per cent of the parts undergo some machining, with the rest being off-the-shelf purchased components,” explained de Koning. “The cooling system alone has 100 items. Then there is the vacuum system and systems for measuring vibration, temperature, and pressure. When the product is finished, it’s really an internet of things [IoT] device.”

The heart of the flywheel is the rotor. It begins, as you would expect, as an enormous ingot in a large forge, a scene that de Koning described as massive pieces of cherry-red-hot steel being hammered, heated, and rolled out.

“There are massive ovens, manipulators, massive presses, and quench tanks, all on the biggest scale. There aren’t many forges of this size in North America,” he said.

The rotor undergoes about 10 steps at the forge, including mechanical tests on samples and ultrasonic analysis.

As it leaves the forge, the rotor is now in its rough shape and is ready for preliminary machining and final machining.

This step involves using a large CNC lathe with heavy-duty loading and unloading systems. The turning process involves creating complex contoured surfaces and has challenging setups. After the rotor is machined, a motor rotor is heat-shrunk into place, after which the entire assembly is precision-ground and polished. It is then that the complete flywheel rotor assembly is ready for Temporal personnel to perform the critical balancing step. 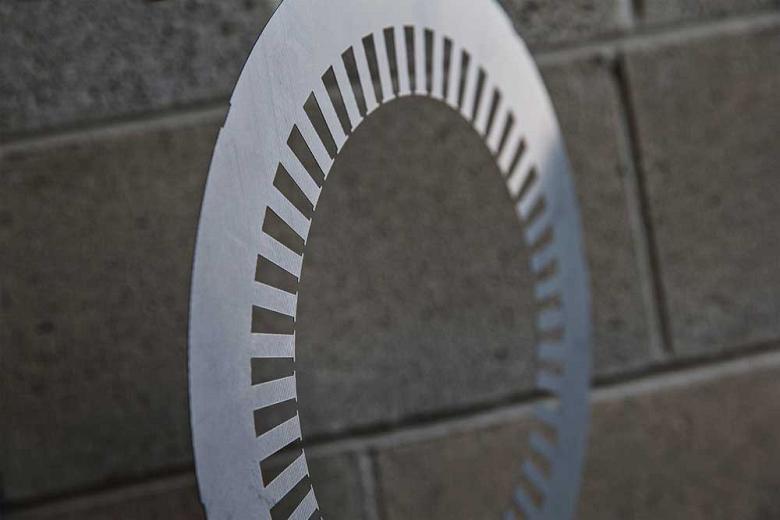 A laser-cut motor part is ready to be installed in one of Temporal Power’s key components for an energy storage device.

“We’re trying to achieve as perfect a spinning mass as we can, making a machine for a 20-year service life,” de Koning said.

So just how do you perfectly balance a 4,000-kg spinning mass to within a few grams? Simply put, by building a customized system yourself because no machinery in existence can do the job.

“The tolerances are very tight,” said de Koning. “If you look at the range of ISO balancing standards, G6.3 and G2.5 apply to things like gas and steam turbines and computer hard drives. G1 is grinding machines and things like that. We are in G04, which is things like balancing navigation gyroscopes. So we needed to create a balancer that would detect very small issues and remove very minor amounts of material.”

The balancing system works like this: The spinning mass is supported on bearing centres, which are in turn supported essentially on what de Koning described as a swing set.

If there is an imbalance, the rotor will want to spin around its centre of mass, but the bearing centres will want to move in one direction or another. Internal sensors measure the degree and angles of the bearing-centre deflections in real time, and software informs proprietary CNC equipment with multiple heads where on the flywheel body to remove an exact amount of body mass.

“Some parts of the system were completely developed in-house and some were modified from leaders in the field,” said de Koning. “We’re pretty happy with it.”

Other flywheel parts start out as die castings or sand castings that are machined and precision-ground. Cast parts also must go through an impregnation process to seal micro-porosity. For corrosion protection, a variety of coatings such as nickel and paint are applied to various parts, and aluminum parts are anodized.

“We also waterjet-cut parts [over about 0.5-in. plate] to rough size and Blanchard grind them to thickness, then free issue them to machine shops that finish the features to final tolerances,” de Koning said. “Sometimes we handle the waterjet cutting and free-issue material to the machine shop, and other times the machine shop handles their own sub-supplier arrangements.”

Looking ahead at Temporal Power

Temporal Power’s manufacturing processes continue to evolve as the company’s team enhances the flywheel’s design and scales up production. 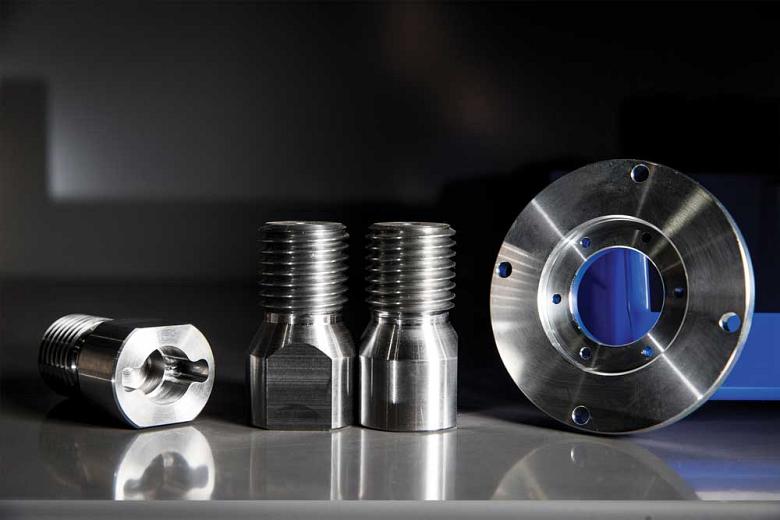 Parts at Temporal Power are created using a combination of milling, turning, drilling, and threading.

“We’re always focused on improving our productivity and repeatability while remaining focused on our excellent safety record,” said de Koning. “It’s the little details that are so much of the effort here. We continue to strive to improve our documentation, quality control, and scheduling.”

De Koning’s span of responsibility exceeds the production floor to things like project management and supply chain coordination, and as the company grows, he says he’s continually looking to the Temporal Power supply chain to deliver more in terms of certainty, scope, and value-add.

“Leveraging the skills in our supply chain reduces risks of delays, logistics cost, and distraction,” he said, “and delivers higher confidence of repeatability in all that we do.”

One example on the Temporal Power value-add wish list is receiving motors custom-made to completion, with even the plating already done. Anodizing of machine parts is another item the firm would like to see handled by machine shops.

“This speeds up the process, and there is less direct oversight required,” de Koning said. “As we grow into a larger-scale manufacturer, we will work with bigger partners that have more scale and scope. But the growth process will take time because at no time can we take the focus off producing a consistent, quality product.”

Orders have been steady for Temporal Power since it began, and domestic sales have included flywheels for grid regulation (Ontario’s Independent Electricity System Operator) and power regulation (a Hydro One wind energy facility in Tillsonburg, Ont.). In 2017 Temporal Power celebrated its first international sale to Aruba, an independent island nation within the Kingdom of the Netherlands located just off the coast of Venezuela.

“The government there wants the island to use 100 per cent renewable power in the near future, mostly from wind, and for that you need energy storage to manage output fluctuations,” said de Koning. “We know the entire Caribbean is watching Aruba, and we are very excited to be part of the team embracing the aggressive adoption of renewable energy generation. Aruba is leading the way for other island nations and microgrid users, and we are there to help them achieve their goals.”