The Beatrice Offshore Wind Farm is the future. Transferring what we know about offshore operations and elevating it to renewable energy, the creative and innovative group at Beatrice Offshore Wind Inc. has made it happen.  A model for the world over, especially regions like offshore Newfoundland, this project proves that energy demand can be met in many ways and one of the most powerful things we can do with oil and gas, is use it to bring in the new energy era.

Beatrice, once fully operational, will be Scotland’s largest offshore wind farm. Located approximately 13km from the Caithness coast, Beatrice will create around 90 full time roles for the duration of its 25 year lifespan. Onshore construction began in Moray in May 2016  and offshore construction began in April 2017. Beatrice will be built in phases and will be fully operational in 2019. The Beatrice Offshore Wind Farm will be located on the north-western point of Smith Bank in the Outer Moray Firth, Scotland, approximately 13.5km away from the Caithness coastline. Covering an area of 131km², the offshore wind farm will be located in close proximity to Beatrice oil platforms and the Jacky oil platform. Upon completion, the project will generate 588MW of renewable electricity, which will be enough to meet the electricity needs of 450,000 UK households.

The project was approved by the Scottish Government in March 2014. Beatrice Offshore Wind Farm Ltd (BOWL), a partnership of SSE (40%), Copenhagen Infrastructure Partners (CIP) (35%) and SDIC Power (25%), will be responsible for the construction. The wind farm is expected to employ 890 and 90 people during construction and operational stages respectively.

The wind farm will be installed with 84 Siemens wind turbines, capable of generating 7MW of power each, with a 154m diameter rotor. All the wind turbines will be mounted on pre-piled jacket substructures, which will be installed at water depths of 55m. The management, designing, engineering, fabrication and installation of the substructures will be managed by Subsea 7 in collaboration with Seaway Heavy Lifting. The wind farm will also include Siemens onshore and offshore substations. The offshore substations will include two offshore transformer modules (OTMs), which will be connected together. The OTMs are one-third in size and weight in comparison to conventional alternating-current (AC) platform and, hence, result in cost saving as no special heavy lift vessel is required for installation. The operations and maintenance base of the wind farm will be located at Wick Harbour. The wind turbines will be serviced and maintained by Siemens for a period of 15 years.

The Beatrice offshore wind project will attract an investment of $3.7bn, which is claimed to be one of the biggest private investments in Scottish infrastructure. European Investment Bank (EIB) supports the investment, with active participation from the new European Fund for Strategic Investments (EFSI). The project is expected to inject approximately $990m to the UK and Scottish economy.

Danish energy firm, Danske Commodities signed a 15-year power purchase agreement (PPA) with BOWL in January 2016 for buying 294MW electricity, which is equivalent to 50% of the total energy produced by the plant.

Burntisland Fabrications (BiFab) was selected to manufacture of 26 jacket substructures for the Beatrice Offshore Windfarm. Swire Blue Ocean was awarded a contract by Siemens to supply wind farm installation vessel for the installation of 84 Siemens wind turbines.

Nexans has reached two key milestones in its major contract to create the high voltage power export connection for Scotland’s Beatrice 588 MW offshore wind farm. The first of the two 400 kV onshore cable links and the high voltage accessories have been installed successfully and tested on site. At the same time, the Nexans factory in Norway has completed the manufacturing of the 220 kV offshore cable and loaded the final section onto the Group’s Skagerrak cable laying vessel for the journey across the North Sea to the Moray Firth, where it will be installed and later trenched into the seabed by Nexans’ unique Capjet system. 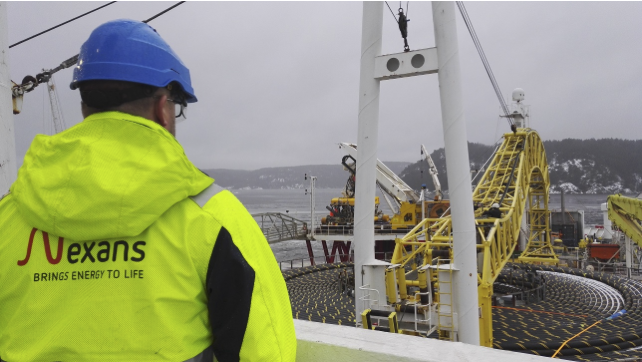 The Beatrice Offshore Windfarm project, scheduled to be fully operational by 2019, is a joint venture between SSE, Copenhagen Infrastructure Partners and Red Rock Power Limited –  the UK subsidiary of China’s SDIC Power Holding Co. Located in the Moray Firth it will be Scotland’s largest wind farm, with the combined output of 84 turbines capable of generating enough electricity to power approximately 450,000 homes.

To export the energy from the wind farm to the grid, the two offshore cables take a route of 70 km along the seabed to a landfall point to the west of Portgordon on the Moray coast. A transition joint bay then connects them to the onshore cable system, which takes a 20 km route to Blackhillock substation. From there, the 400 kV onshore cables will transmit the electricity to the grid.

Nexans was awarded the turnkey contract to design, manufacture, test, deliver, and install both circuits of the complete power transmission cable system. This included the delivery of a total of 265 km of cables, including 145 km of 220 kV offshore cables, 115 km of 220 kV and 5 km of 400 kV onshore cables and the associated high voltage accessories.

Nexans completed the laying and burial of the first offshore cable route in 2017 and connected it to the offshore platform in February 2018. In March 2018, Nexans installed the 400 kV onshore circuits and their outdoor sealing ends using its expertise of carrying out the termination works horizontally prior to connecting them vertically at Blackhillock substation.

“The Beatrice project perfectly illustrates our capacity to deliver turnkey grid connection solutions for offshore wind farms,” said Vincent Dessale, Senior Executive Vice President for the Subsea and Land Systems business group at Nexans. “For many years Nexans has been committed to facilitating the energy transition in Europe and worldwide, and we are proud to contribute to building Scotland’s largest wind farm.”