Corvus Energy is pleased to announce that it has been selected by Stena Line and Callenberg Technology Group to supply the lithium ion-based Energy Storage System (ESS) for the battery-power retrofit of M/V Stena Jutlandica.

Stena Line will be the first Swedish ferry operator to operate a ferry with zero emissions while berthing and in port. Stena Jutlandica is a combined passenger and freight ferry—or Ro-Pax ferry—operating between Gothenburg, Sweden and Frederikshavn, Denmark. The project is co-financed by the European Union and Swedish Transport Administration. 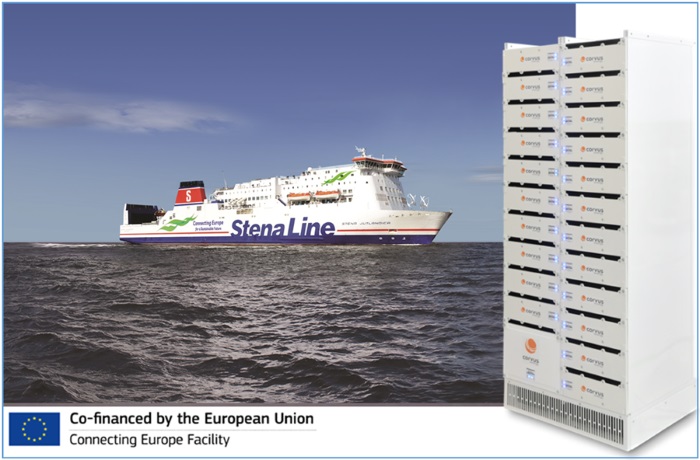 This initial stage of the retrofit employs plug-in hybrid technology that charges with shore power and draws on battery power for bow thrusters and maneuvering when berthing in port. The ultimate goal is for the Stena Jutlandica to operate fully on battery power, requiring an estimated 50 MWh of stored energy for the 3 hours and 25-minute crossing. Shore power from clean energy sources is also an important focus area.

“The project has been received very positively by maritime and Swedish transportation authories,” says Per Wimby, Project Manager at Stena Teknik. “We look forward to gathering knowledge about electric operation and continuing to explore the role that battery operation can play as an alternative to traditional fuel and eliminating emissions.”

“We are impressed with Corvus Energy’s battery technology and the company’s track record in the maritime industry,” says Per-Erik Larsson, Director Sales at Callenberg.

“The Stena Jutlandica will be a showcase ship whose impact extends beyond the boundaries of Scandinavia and the passenger ferry industry,” says Halvard Hauso, SVP, Sales and Key Accounts at Corvus Energy. “We are excited about working with the talented people at Stena Teknik, Callenberg, and Stena Line to bring their visions of sustainable shipping to fruition.”
Source: Corvus Energy