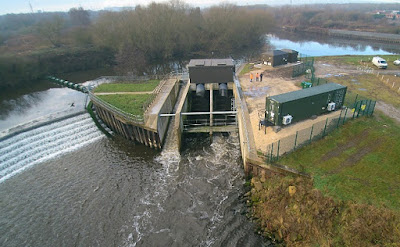 A pioneering energy scheme in Rotherham is one of the first in the UK to be combined with battery storage units so that it can provide a boost to the National Grid at times of peak demand.

Based on the River Don between Kilnhurst and Rotherham Golf Club, the £2.1m project opened in 2015 as one of just a handful of large low-head hydropower (LHHP) developments in the country that were the first to be built since the 1920s.

Barn Energy worked with its sister company, Eelpower Limited to deploy battery units alongside Thrybergh and at Knottingley, on the River Aire near Wakefield. This is the first time that battery storage units have been deployed in the UK in combination with low-head river hydro schemes.

Built by China’s BYD and installed by Anesco, each lithium-ion battery unit has a capacity of over 1200kWh. Each is currently delivering on a two-year contract to deliver Firm Frequency Response (FFR) for the National Grid. FFR is a service provided by energy users to National Grid, which uses approved assets to quickly reduce demand or increase generation to help balance the grid and avoid power outages.

The batteries will also seek to export over TRIAD days (the three highest national half hourly system peaks across the winter period), multiplying Thrybergh’s output by five times its original capacity (260kW) and Knottingley’s (500kW) by two and a half times.

Mark Simon, chief executive of both Barn Energy and Eelpower Limited,said: “By co-locating the battery units with hydropower, 60-70% of the battery consumption (when performing grid balancing services such as FFR) is provided for by hydropower and the rest comes from the grid. This is a significant benefit for the economics of our battery, and of our hydropower station.”

Using twin “Archimedes screw” turbines, the Rotherham plant has the same annual output as a 1.1MW solar farm, which would take up around six acres of land. It also includes fish and eel passages which open up another stretch of the river and are part of an ambitious long-term plan to get salmon back up to Sheffield, where they can spawn.