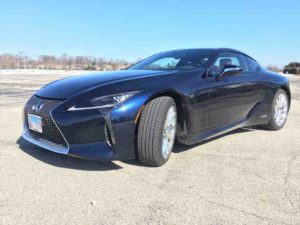 The Lexus LC500h is an eco-friendly version of the gorgeous flagship introduced last year. The sedate luxury brand needed an aspirational vehicle that would get attention, if not sales. Sales are about 100 units short of the projected 400 units a month since it went on sale in May 2017. Buzz is strong.

The LC500 is arguably the most head-turning vehicle available for less than $100,000. Low-slung, with the wheels pushed all the way to the edge, and a wide bulging rear end so there is no mistake about the intent of what lies under the hood: a fire-breathing 471-horsepower V-8 engine in rear-wheel drive that is so good it’s almost dangerous. It hits 60 mph in 4.4 seconds, with a top speed of 168 mph. It’ll make you smile.

As remarkable as the V-8 is, the technology underpinning the hybrid is equally impressive, if not confusing.

It does not drive like a traditional hybrid in the Toyota/Lexus family, the world’s leader in hybrid powertrains. The only similarity of the “multistage hybrid system” is at low speeds, when the lithium ion-powered motor is doing all the work. In more spirited driving, it feels and sounds like a sports car, thanks to some artificial engine noise piped through the speakers.

The multistage is essentially two transmissions consisting of a continuously variable transmission that is modulated by a four-speed automatic.

Switching to manual mode replicates a 10-speed transmission accessible via paddle shifters. Hitting the redline will cause it to shift on its own, but for the most part the driver feels in charge. The system shifts seamlessly and quickly through the early gears, then the higher the speed, the longer it will stay in that gear. At cruising speed the engine takes over at its optimal efficiency and charges the battery. There is no CVT drone, which happens when the vehicle speed is trying to catch up to the high engine speed.

Why do it? Greater efficiency in every aspect except racing. And since most owners aren’t going to be racing most of the time, it makes sense.

Yet it is a sports car. If there weren’t the V-8 for comparison, the V-6 would feel punchy enough, and in sport plus mode the rear-drive waggles under that combined 350 pound-feet of torque. The balance is great, with exceptional handling and direct steering, but there isn’t the lift off the line that drops the stomach and elicits a howl. For $100,000, it’s fair to expect more performance.

Evidently, like purveyors of fine decaf, Lexus knows a less-potent hybrid can suit the contrasting tastes of performance and efficiency.