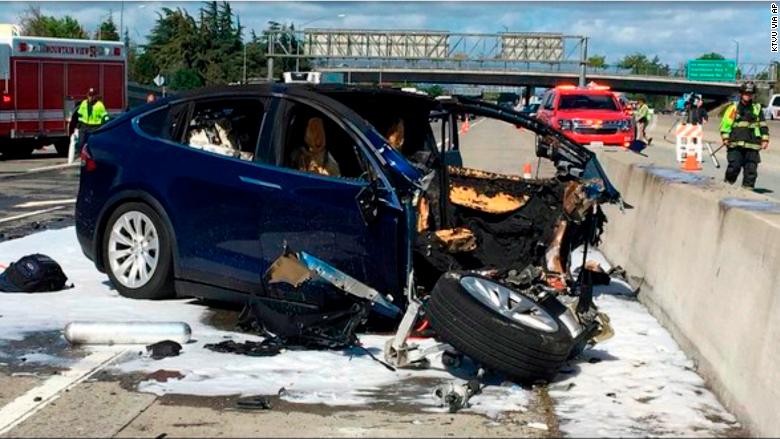 On March 23, a 38-year-old man driving a Tesla Model X rammed headfirst into an unshielded highway median while traveling south on U.S. Highway 101 near Mountain View, California. Two other vehicles subsequently rear-ended the SUV, which caught fire after the driver, who later died from his injuries, was pulled from the wreckage.

According to news reports, the car blaze shut the highway for 5 hours, firefighters required special suits for cleanup, and at one point had to call Tesla for help in containing the blaze. On Tuesday (March 27), the U.S. National Transportation Safety Board (NTSB) announced a field investigation into the incident.

These are all excellent questions that Tesla drivers might be itching to have answered.

But are Teslas more likely to catch fire than other cars? And when they do catch fire, why are they such a nightmare to put out?

The limited available data suggest that electric vehicles are not more prone to battery fires — but their lithium-ion batteries can fuel hotter fires that release toxic fumes and are harder to extinguish, experts say.

The batteries that fuel a typical gasoline-powered car differ from those in an electric vehicle. The former are lead-acid-based, with lower energy densities — meaning they carry less energy in the same amount of space — than the compact,rechargeable lithium-ion, or Li-ion, batteries that power electric vehicles, including the Tesla Model X.

A normal 12-volt “small” gasoline-powered car battery provides roughly 0.5 kilowatt-hours (kWh) of energy. Since the fully electric battery in the Model X comes with 75- to 100-kWh batteries, this means roughly 150 to 200 normal car batteries would be needed to power the SUV.

Another difference between the battery you might jump in a gas-powered car and the one you’d find under a Model X hood is that, while lead-acid batteries can self-ignite with small fires, those can’t leap into other parts of the battery to ignite them and cause a chain reaction. This can happen in lithium-ion batteries, however, said Peter Sunderland, a professor of fire protection engineering at the University of Maryland. Sometimes, when a Li-ion battery gets damaged, it shorts. The resulting spark might ignite the nearby lithium, and the lithium next to that, until the whole battery is ablaze.

The trick with designing an EV battery, in particular, is balancing the benefits of higher energy density — which enables the EVs to go farther on each charge — with the associated risks of battery sparking. “Higher energy density means a higher risk of external sparking,”Arunachalanadar Mada Kannan, a professor of engineering at Arizona State University, told Live Science.

More often in EVs, however, lithium-ion battery fires happen due to thermal runaway, or the spontaneous explosion of the battery thanks to a buildup of heat in the cells inside. In its recent blog post, Tesla noted that the battery packs in the company’s electrical vehicles were designed with firewalls, so that a fire would spread slowly enough to give the driver time to exit the car.

Li-ion battery fires can be very intense, emitting large amounts of heat and smoke or gas, Bengt-Erik Mellander, a professor of subatomic and plasma physics at Chalmers University of Technology in Gothenburg, Sweden, told Live Science in an email.

The recent high-profile Tesla fires have started after the battery was damagedin some way.

“The crash in Mountain View was very violent, chopping off the front end of the car and severely damaging the front end of the battery storage under the car (as far as I can see),” Mellander wrote. In the 2013 fire, the Model S’s battery compartment was also damaged prior to the fire, when an errant metal object hit the undercarriage.

The return of an old debate

The recent Model X crash has brought back the debate on whether electric vehicles (EVs) are saferthan gasoline- and diesel-powered vehicles when it comes to car fires. (Separately, investigators are asking whether the Tesla’s semi-autonomous Autopilot mode contributed to the crash.)

This isn’t the first time a Tesla has caught fire. In 2013, a Tesla Model S driving near Seattle experienced an unexpected fire in its car battery. Videos and images of the fiery inferno splashed across media outlets, and Tesla’s stock took a tumble before company CEO Elon Musk swooped in to assuage consumer concerns. In his blog, Musk did some quick calculations to determine that “You are 5 times more likely to experience a fire in a conventional gasoline car than a Tesla!”

In order to further minimize risks, however, “something needs to be done at the level of the manufacturing plant, where these batteries are being made,” Sunderland said. “Better quality control, better research and development to make sure the battery materials are up to standards.”

Though electric cars may not be more fire-prone, “the risks and the strategies to use in case of an accident and a subsequent fire are different to that of fires in conventional cars,” Mellander said.

Sunderland agreed. While firefighters know how to handle gasoline fires, these personnel are not as well-trained in dealing with electrical emission hazards. “With a gasoline fire, they know if they get enough water on it, it’ll go out,” he said. “But with a deep-seated fire, it’s hard to spray the water deep enough into the battery to stop the fire.”

Slate reported that the firefighters who attempted to put out the 2013 Model S car fire in Seattle had trouble and “ended up using a circular saw to cut a hole that would allow them to pour water directly on the battery.”

In a fiery Tesla crash into a barrier in Austria, the car kept reigniting, forcing firefighters to battle the flames for hours. The car had to be put into quarantine for 48 hours to remove the chances of reignition, Jalopnik reported.

What’s more, lithium-ion fires can release high levels of “toxic gases” such as carbon monoxide, soot, hydrogen fluoride, and particulates of oxides of nickel; aluminum; lithium; copper; and cobalt, according to a Tesla Model X emergency response guide. As a result, firefighters need to wear a self-contained breathing apparatus and should use hoses that spray fog and special ventilation fans that push air out at a high velocity to protect bystanders downwind of the fire, according to the guide.

Firefighters need more training, but the reality is that fires in electric vehicles don’t happen that often, Sunderland said.

However, if many more electric vehicles take to the roads in the future, these fires could become more common, and firefighters will need to know how to safely extinguish them.

Ultimately, accidents like this one shouldn’t discourage consumers from investing in clean-energy vehicles, Sunderland said. “Fatalities are setbacks, but help us accept there is never zero risk with EVs,” he said.