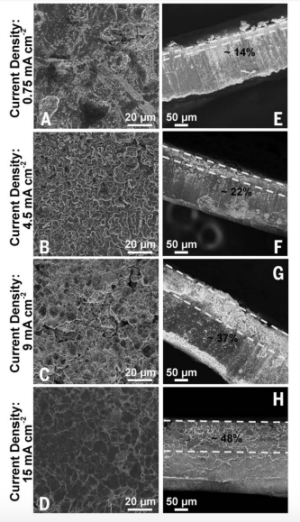 Dendrites—branching structures that look like tree limbs—are fun to draw and good on neurons, but they’re generally best avoided in lithium-ion batteries. As ions are exchanged between the anode and cathode over several charge and discharge cycles, lithium electrodes will sometimes grow dendrites that can expand through the electrolyte that separates the anode and cathode. These dendrites can reduce the battery’s capacity, shorten the life of the battery, or even start fires as the dendrites heat up. (Dendrites were found in the batteries related to the Boeing 787 battery fires that happened in 2014, for example.)

But researchers from Rensselaer Polytechnic Institute in Troy, New York have proposed a way to ameliorate this dendrite growth. They’ve done this not by fighting against the dendrites and trying to contain them (as many researchers have attempted) but by using the tendency of dendrites to heat up in response to high-current density to make those electrode growths smaller.

The researchers admit that high current density is usually a cause of dendrites, not a solution to them. But they say that a current density of 9 milliamperes per square centimeter (mA cm−2) is a sort of Goldilocks point: “The local heating gives flux and flow to Li [lithium], triggering extensive surface diffusion, which smoothens the dendrites… The self-heating is at safe levels, below any danger of electrolyte breakdown or thermal damage to the separator.”

On a test Li-Li battery, the dendrite healing effect was even more pronounced, at 15 mA cm−2. When that current density was applied, the dendrites fused “through the entire thickness of the dendritic layer… transforming into a relatively smooth and compact (dense) layer,” the paper’s authors write.

The researchers then tested the batteries to see if healing the dendrites expanded their life. Cells that had received smaller current density pulses shorted in about 500 hours “because of the dendritic projections” that grew on the lithium electrodes. The cells that had been pulsed with current densities above 9 mA cm−2 “showed no indication of electrical shorting even after 2,000 hours.”

This research is especially interesting because it was conducted (pun intended?) with lithium metal. Lithium metal hasn’t been used much in batteries outside of a lab due to its tendency to grow dendrites, even though such batteries are energy dense. But if it’s possible to “heal” dendrites as they form, that could make lithium metal anodes, and thus more energy-dense batteries, a possibility.
Although this is just another incremental step down a long line of research on lithium metal, the bigger picture is that a more energy-dense battery could give rise to electric cars with longer ranges or even to electric planes. At a recent summit held by the Advanced Research Projects Agency-Energy (ARPA-E), a researcher for Boeing said that an energy density of 500 watt-hours per kilogram (Wh/kg) would be the minimum needed to fly a very small plane on batteries. Currently, a 18,650 lithium-ion battery cell has an energy density of 250 Wh/kg. And incremental steps like this research open the doors to new materials that could change that number for the better.