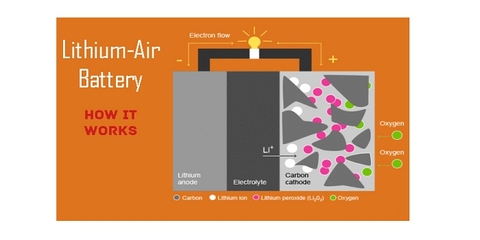 According to market research company StreetSignals, lithium-air technology is the next evolutionary step in battery power. The technology will allow for higher capacity batteries in smaller packages, reduce overall material requirements, and optimize both weight and cost of a product. The lithium-air market looks set to provide a boost to a lithium industry where supply is already having difficulty keeping up with demand. Some of the companies that may benefit from this increased demand include Lundin Mining, Trevali Mining, Supreme Metals, International Battery Metals, and Wealth Minerals.

As the name suggests, lithium-air cells take oxygen from the air, which reacts with the lithium in the battery to generate electricity. Since these batteries are not restricted with the use of purified air streams like from an oxygen tank and can function on regular air alone, they can be made smaller and more efficient. Military applications alone are enough to make the market value of lithium explode. Lithium-air batteries are perfect for every type of single-use military applications, from ordinance guidance systems and torpedoes to UAVs and artillery fuses.

More common applications include cellphones and electric vehicles. Companies like Samsung Electronics are developing their own lithium-air battery that will allow electric vehicles to double their range. Lithium-air batteries are highly promising technologies for cars and portable electronic devices because of their potential for delivering a high energy output relative to their weight.

Research on lithium-air technology is ramping up. Research at the University of Illinois at Chicago (UIC) and at Argonne National Laboratory has produced a lithium-air battery which can be charged and discharged at a record-breaking 750 times. This more environmentally sustainable battery means there will be less batteries in landfills. Similarly, researchers at MIT are also developing a lithium-air battery with only an 8% charging loss, which means both an efficient and quick-charging battery. In both cases, these batteries could store much more energy in a smaller package compared to current commercially available lithium-ion cells.

Bottom line, lithium-air technology could potentially spike demand for lithium and create numerous opportunities for up and coming mining companies as well as inspire unique applications and products. More lithium learning is available with a quick visit to StreetSignals.