In theory, lithium-metal batteries have the potential to store huge amounts of energy at low cost but attempts to develop them in practice keep failing because of a persistent problem. Now, it seems that a team of engineers is very near to solving the problem.

The need for high-capacity energy storage is growing, especially for use with wind turbines, smart grids, and electric vehicles. However, the technology to meet this demand in a stable, effective, and affordable way is lagging. 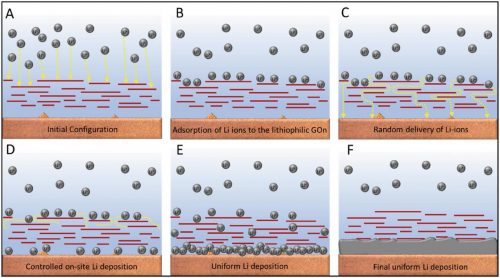 The researchers liken the way in which the new material controls the deposition of lithium to the way that pegs control and direct the fall of metal balls in a pachinko game. Credit: Tara Foroozan and colleagues.

The idea of lithium-metal batteries is not new – it has been around for more than 100 years.

Unlike their cousins – the lithium-ion batteries that are now widely-used in consumer electronics – lithium-metal batteries have not taken off because their development has been stuck at a practical problem that causes them to overheat and even catch fire.

Overcoming the problem of dendrites

The problem is that over time, lithium atoms deposit and form needle-like growths called dendrites. Nevertheless, because of the technology’s great promise, scientists and engineers have continued to work towards a solution.

And now, a study reported in the journal Advanced Functional Materials by researchers at the University of Illinois at Chicago and at Texas A&M University, seems to have overcome the problem with the help of “graphene oxide nanosheets.”

With the help of supercomputers at Texas A&M University,  the team was able to study the chemistry and physics at work in the dendritic formations and to engineer the new material that would stop the dendrites from forming.

“The idea,” explains study co-author Perla Balbuena, who is a professor of chemical engineering at Texas A&M, “was to develop a coating material that can protect the lithium metal and make the ion deposition much smoother.”

Eventually, the researchers came up with a graphene oxide nanosheet that is sprayed onto a separator made of glass fibre that can then be inserted into the battery.

The lithium ions pass through the material much more slowly and, when they combine with electrons to form uncharged lithium atoms, the atoms do not form needles but deposit evenly to form a smooth, flat surface.

Using computer models and “molecular dynamics simulations” as well as microscopic imaging in physical experiments, the researchers could see how the new material controls the process.

First, the lithium ions form a thin film on the surface of the graphene oxide and then diffuse through gaps in the layers of material before they settle in the bottom layer of the nanosheet. The researchers liken the process to the way that pegs control and direct the fall of metal balls in a pachinko game.

“We were interested in elucidating how the lithium ions were diffusing through the system and becoming atoms when the deposition ends in lithium plating,” Prof. Balbuena explains.

With the help of the graphene oxide nanosheets, the researchers found that the lithium-metal batteries showed “a remarkably enhanced cycle life and stability of the Li‐metal anode.”

The modified lithium-metal batteries kept stable for up to 160 cycles. This is a significant improvement on the unmodified batteries which tend to lose efficiency at 120 cycles.