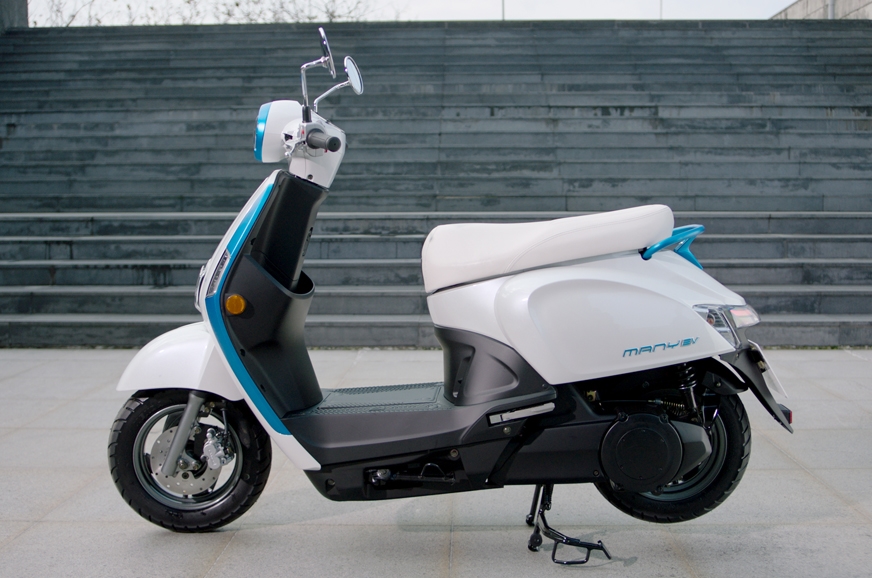 Kwang Yang Motor Co (KYMCO) joins a long list of two-wheeler manufacturers that are trying their hands at the electric vehicle segment. Unlike Tesla, which has dominated proceedings in the four-wheeler segment of electric vehicles, the same hasn’t been done in the two-wheeler space globally. The difficulties faced by electric two-wheelers have been battery range, charging time and the lack of infrastructure. KYMCO though feels that it has the solution for the above barriers by employing removable batteries, something we also saw on the Honda PCX Electric which was displayed at the 2018 Auto Expo. However, KYMCO takes it a step further with a whole ecosystem of charging solutions that it intends to make a reality in the future

The highlight of the KYMCO Ionex solution is its lightweight batteries (5kg each) which are removable and are accommodated inside the floorboard itself. According to the company, placing the batteries inside the floorboard provides the scooter the lowest centre of gravity possible and also frees up under seat storage. The scooter that debuted within the Ionex solution is called the Many EV and more such products will follow in the future.

There’s also provision to store three more batteries under seat which extends the Many EV’s range to 200km. Range anxiety is addressed by a ‘core’ battery, which is permanently stored inside the scooter, which means that even if all the batteries are under charge, you can still ride the scooter for a certain distance. The core battery gets automatically recharged once the removable batteries are replaced. One can charge the Ionex in a conventional manner by plugging it to a power source, or, you can carry the removable batteries with you and charge it in home or at your work station in office. KYMCO has not disclosed the capacity and range of the core battery in isolation.

For now, KYMCO hasn’t released much further on the scooter itself and has chosen to focus more on what Ionex offers. The company has set itself a target of setting up charging networks in 20 countries and is in talks with local governments for the same. It plans to produce 5,00,000 EVs in the next three years with 10 products that will be born under the Ionex portfolio. The Taiwanese brand is also working on Power Outlet Network, which will act like a vending machine for batteries where riders can replace the empty units with charged ones and there will even be an option to rent batteries, depending on their use.

Talking about the Indian market, the electric two-wheeler segment is still in its nascent stage and the biggest hurdle faced by prospective buyers is charging and the replaceable batteries looks like a solution for the above hurdle.  KYMCO hasn’t yet revealed which markets will get Ionex based products first, or what they will be priced at.

The company is a big entity in South East Asia and it also does business in USA and Europe, but an India presence has remained off the table so far. That may be about to change soon as we are expecting to hear soon from the company on its India plans, so watch this space for updates.