Volkswagen held the world premiere of its new, third-generation Touareg SUV in China—its largest market. Worldwide sales of the previous two generations amount to nearly one million units; the largest markets for the new Touareg—which serves as a technology flagship for the automaker—are China, Europe and Russia. 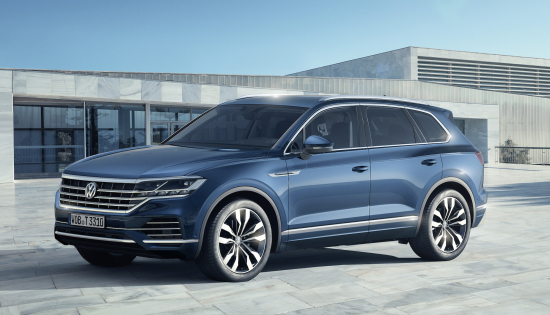 4MOTION all-wheel drive. The new, third-generation Touareg continues to be equipped with permanent all-wheel drive (4MOTION) as standard. The all-wheel drive is coupled to an 8-speed automatic gearbox (with shift by wire and a selector lever position indicator in the instrument cluster), likewise as standard, which can transfer drive torques of up to 1,000 N·m.

A center differential lock with asymmetrically dynamic torque distribution acts as the transfer box between the front and rear axles. A maximum of 70% of drive torque can be applied to the front wheels and up to 80% to the rear wheels.

Premiere of the Innovision Cockpit. Volkswagen is presenting the fully digitalized Innovision Cockpit for the first time in the new Touareg. Here the digital instruments (Digital Cockpit with 12-inch display) and the top Discover Premium infotainment system (with 15-inch display) merge to form a digital operating, information, communication and entertainment unit that hardly needs any conventional buttons or switches. 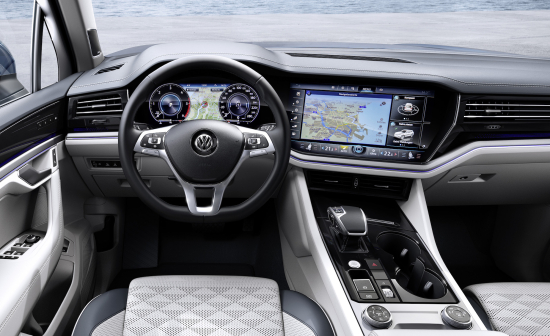 Drivers use the Innovision Cockpit to adapt the assistance, handling and comfort systems specifically to their personal tastes; the car becomes their Touareg. This opens up a world in which the driver and on-board guests no longer have to adapt to the car; rather the car adapts to them. Like a new smartphone, the Volkswagen is set up and tuned to personal needs. This is made possible by a new high level of connected systems and programs controlled via digital interfaces and the multifunction steering wheel.

Fusion of new assistance, handling and comfort systems. The Touareg is launching with the largest range of assistance, handling and comfort systems yet to be integrated into a Volkswagen. They include technologies such as the Night Vision assistance system (detects people and animals in darkness via a thermal imaging camera), Roadwork Lane Assist (semi-automated steering and lane keeping, accelerating and braking up to 60 km/h), Front Cross Traffic Assist (reacts to cross traffic in front of the Touareg), active all-wheel steering (makes the Touareg handle like a compact car), new roll stabilization with electromechanically controlled anti-roll bars, IQ.Light – LED matrix headlights (interactive, camera-based dipped and main beam headlight control) and a Windshield Head-up Display projected directly onto the windshield.

New dimensions and reduced weight. Compared to its predecessor, the third generation Touareg is moderately wider and longer. The new dimensions have positive effects on both the vehicle’s proportions and its amount of interior space. The added exterior length leads, for example, to a significant increase in luggage capacity, from 697 to 810 litres (with rear bench seat up). Cargo there is hidden from onlookers by an optional electrically extending and retracting luggage compartment cover. Despite its increased length and width, the car body is 106 kg lighter because of its mixed material construction of aluminium (48%) and high-tech steels (52%). 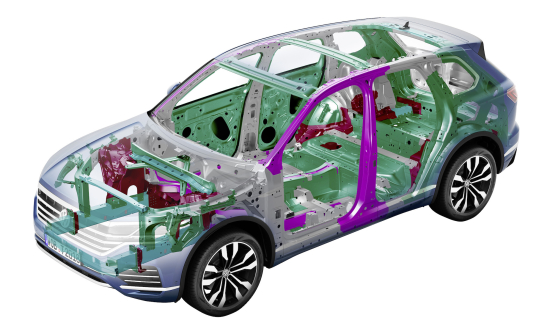 Volkswagen SUV campaign. The 2018 Touareg is an important milestone in the largest product and technology campaign in the history of the Volkswagen brand. The brand’s range of SUVs is also being expanded comprehensively. It currently consists of the new T-Roc, the Tiguan, the new Tiguan Allspace (Europe) and Tiguan L (China), the new Atlas (USA) and the Teramont (China), plus the now completely redesigned Touareg as Volkswagen’s top SUV model. Volkswagen will also be further extending the lower end of its SUV range with the compact T-Cross. The first all-electric SUV from Volkswagen—the I.D. CROZZ—will arrive on the market in 2020.

Volkswagen in China: SUVs. Volkswagen unveiled the Touareg at an “SUV Brand Day” event in Beijing. By 2020, at least 12 further SUV models for the Chinese market are to follow. Volkswagen has also given the green light for its nationwide communications campaign “Move Forward”, which is intended to further strengthen the brand.

China is crucially important for Volkswagen; there is no other region where the brand sells more vehicles. Last year, Volkswagen handed 3.2 million vehicles over to customers in China, reaching a market share of more than 13%. This makes Volkswagen a clear market leader in the world’s largest and most important automobile market. With its strategy TRANSFORM 2025+, the brand intends to further strengthen its leading position: By 2020, the product range is to be entirely renewed and expanded. This year alone, nine new models are to be launched in China.

The model and innovation offensive focuses on SUVs. The worldwide boom in SUVs is especially strongly marked in China. Current market forecasts indicate that every second new car in China could soon be an SUV. With the Tiguan and the Teramont, the Volkswagen brand already offers two bestsellers. In 2017, the brand delivered about 400,000 SUVs to customers.

Over the next three years, at least 10 more SUVs are to be launched for the Chinese market, including four this year. The new Touareg marks the start of this wave. E-mobility is another main focus of the model offensive. This year, Volkswagen is already launching a plug-in hybrid version of the Tiguan and a full electric variant of the new Bora. The full electric, fully networked I.D. family based on the modular electrification toolkit (MEB) is being launched in China from 2020. The I.D. will make its debut at almost the same time in Europe, China and the USA.

Volkswagen is active at 19 production locations throughout the country, including nine vehicle and 10 components plants. In total, 85,000 people work for the Volkswagen Group in China. The product portfolio of the brand currently includes more than 20 models, many of which were developed especially for China, such as the Teramont, the Phideon or the Lamando. In addition to production, Volkswagen is also strengthening its development competences in China, especially in future-oriented areas such as e-mobility and digitalization.

Within the framework of its TRANSFORM 2025+ strategy for the future, Volkswagen is taking action to reposition its business on world markets. Responsibilities previously held centrally in Wolfsburg are increasingly being transferred by the brand so that the regions can act autonomously. The regions will then be responsible for the entire range of business, including decisions on the model portfolio.