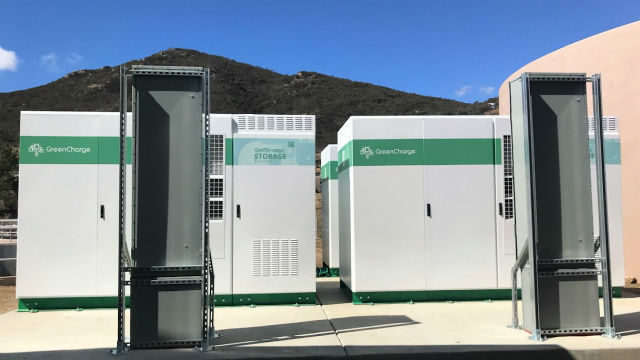 The energy storage system is designed to reduce operational expense at the facility by storing low-cost electricity for use during high-demand periods when energy prices increase.

The batteries were installed at no charge as part of an agreement with Santa Clara-based ENGIE Storage. The system charges from either the electric grid at times when rates are low, or from some 4,800 solar panels at the treatment plant.

“Energy storage is a strategic addition to the water authority’s solar energy installations, which have already reduced power costs and made the agency more environmentally friendly,” said Mark Muir, chair of the authority’s board. “This project is a good example of how we continually look for ways to maximize investments in the regional water treatment and delivery system to the benefit of our ratepayers.”

Improving battery technology has led to growing use of large storage batteries in the San Diego area. Last year San Diego Gas & Electric installed one of the largest in the world in Escondido to store energy from renewable energy sources like solar and wind.

The water authority’s energy program includes an energy storage facility at Lake Hodges and a 2016 agreement to purchase low-cost power from Hoover Dam. In addition, the water authority and City of San Diego are exploring the development of a pumped-storage facility at San Vicente Reservoir. If built, it would be a 500-megawatt facility — enough to power tens of thousands of homes.