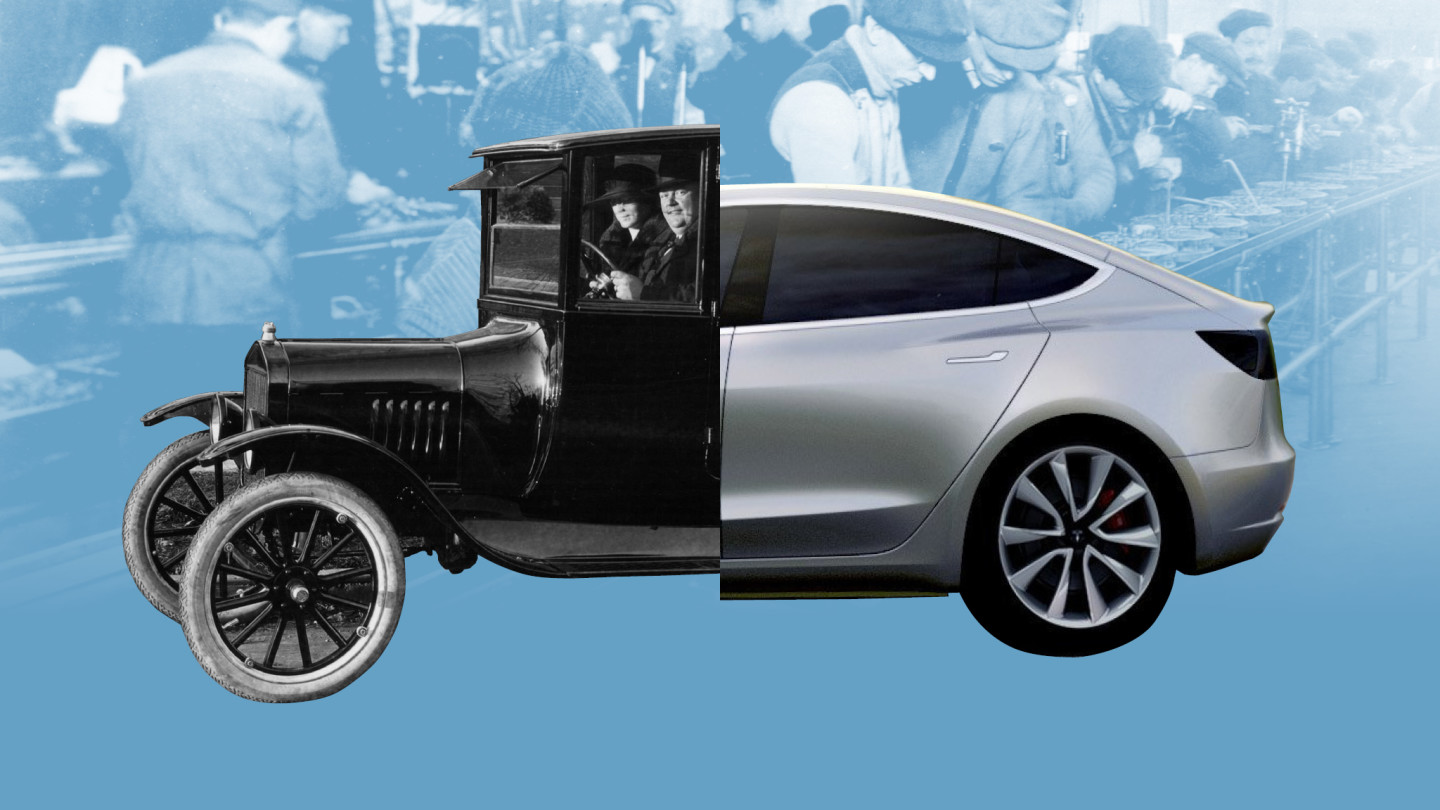 When Henry Ford introduced the Model T in 1908, the automobile had already been around for two decades. The revolution he engineered was not the car, but the system that made it.

Ford introduced standardised, interchangeable parts, followed by assembly line production. By 1914, according to HSBC, Ford’s output was greater than all other carmakers combined and its production costs tumbled from $850 per car at launch to $260 by 1920. The founder’s predecessors had succeeded in building “horseless carriages” for the rich, leaving Ford to reap the profits of ramping up production.

A century later, executives at some of the world’s biggest automakers are growing confident that they can pull off a similar trick for electric vehicles.

While General Motors, Volkswagen and Toyota all make around 10m cars a year, each is playing catch-up on long-range, zero-emission vehicles. But by “adopting, adapting, imitating, innovating and acquiring”, as Goldman Sachs puts it, they are revamping facilities to produce electric cars at scale and for profit — two achievements yet to be seen at Tesla despite the huge disruption the US electric carmaker has brought to the market.

Ford only had to build one model. “The Model T was so successful because they were able to deliver a car for everybody,” says Lutz Meyer, a BMW executive focused on future vehicle architectures. “It had to be cheap. They couldn’t produce variety, like a lot of colours.”

Today, established carmakers flaunt their ability to manufacture all kinds of models, from hatchbacks to sport utility vehicles, on a single production line. Their challenge is to revamp these operations to produce electric vehicles in high volumes, reinforcing barriers to entry in an industry under siege from technology companies and start-ups.

Instead of coming out with an array of unprofitable electric cars today, the incumbents are putting the bulk of resources into production facilities that will mass-produce models from 2020, once battery costs fall and economies of scale kick in. Analysts suggest this approach leaves the impression the incumbents are lagging far behind Tesla. But once the game actually starts, say experts, the carmakers will be in a strong position to dominate the market.

“None of the traditional car manufacturers will have problems scaling up electric vehicle production,” says Klaus Stricker, co-head of the global automotive practice at Bain & Company. “That’s exactly what they do best.”

Yet if the stock market is any guide, investors are more sceptical. Valuations of the big carmakers are among the most depressed on the S&P 500, Germany’s DAX and Japan’s Nikkei indices, according to Bernstein. Yet Tesla is valued like its products are set to dominate the car market the way Apple conquered mobile phones.

Tesla’s market value of $55bn is about $2.3bn more than GM’s, though for every car it built last year the latter group produced 100.

This large valuation gap reflects a view that traditional carmakers’ core capabilities of assembling and distributing cars is an “old world” competence with little relevance to an electric future. As HSBC analyst Horst Schneider wrote in September: the big carmakers “may lack any advantage” over new competitors because they are not involved in battery cell production.

Feeding this prevailing belief is the idea that barriers to entry are much lower than previously imagined. Tesla was the first successful American car company to emerge since Chrysler in 1925. The Silicon Valley company run by Elon Musk launched the first long-range electric cars — the Roadster in 2008 and the Model S in 2012. It looked poised to make headway last year with the Model 3, aiming to build 5,000 vehicles a week by late 2017.

This idea is now being turned on its head. Tesla has postponed its production target, twice, to the end of June, and even this new deadline is met with scepticism. The bulls at Morgan Stanley, who consider Tesla undervalued, concede it would be a “leap of faith” to expect 5,000 cars a week anytime this year.

Mr Musk has a reputation for setting, and then rescheduling, ambitious targets. In this case the delays look more serious, as the Model 3 was Tesla’s first foray into the mainstream. Rather than taking on the big carmakers, the Model 3 problems may simply be highlighting their advantages: plentiful financial resources, decades of manufacturing expertise and global sales networks.

“Elon Musk is definitely big picture thinking,” says Kristina Church, analyst at Barclays, “but the established carmakers really know how to engineer vehicles, and to engineer them profitably. That is a whole lot of learning that Tesla is trying to catch up with.”

Tesla’s production troubles are a reminder that in automotive history, it is how to build cars, rather than the merits of any particular model, that is key to success. After Ford displaced craft production with mass assembly in 1908, it was overtaken by GM in the 1920s with “flexible mass production” that could produce an array of models, from entry-level to luxury brands, and respond to customer preferences. In the 1980s, both companies were disrupted by Honda and Toyota’s methods of lean production. The Japanese groups outsourced a majority of tasks previously considered critical. With parts arriving “just in time” on the assembly line, they largely did away with inventories.

The success of German manufacturers, whose volumes more than trebled from 4m units in 1990 to 15m last year, was largely based on “platform sharing” that let multiple models use the same design underpinnings. VW Group, the world’s largest carmaker, uses common building blocks under “the Lego principle” to share engines, transmissions and components across its 12 brands.

These progressive changes were all based on superior methods of producing cars, forcing rivals to adapt or die. “Efficiency was always the cornerstone of success in the automotive industry,” says Oliver Zipse, head of production at BMW. “As soon as you were not able to produce in a particular cost frame, you were out of the market.”

Carmakers are today investing in production plants that integrate reams of data with processes across the supply chain. Assembly times are being accelerated and downtime is being cut by fixing problems before they occur.

“The whole system is becoming enormously complex all of a sudden,” Mr Zipse says. He refers to the need for carmakers to incorporate new drive trains and autonomous technology, while keeping the speed of production cycle at just 60 seconds. “If you’re not able to [keep] this complex system working 100 per cent faultless, you will never do 60 second [manufacturing] cycles, and if you’re not doing 60 second cycles, you’ll never build 300,000 cars.”

Mr Musk acknowledges the importance of what he calls “the machine that builds the machine”. Last month he told analysts: “The competitive strength of Tesla, long term, is not going to be the car. It’s going to be the factory.”

So far, the threat posed by Tesla has not been based on a superior production method. So as the big carmakers shift into electric cars, numerous executives believe they have a decisive advantage.

“You’re going to see some really, really good electric vehicles coming from the traditional carmakers,” says Don Walker, chief executive of Magna, which assembles cars for contract. “They are going to be extremely well-built, extremely reliable — from the buzz, squeak and rattle to the fit and finish.”

The stock market view is that carmakers have been too slow to adapt. Unquestionably, Tesla built up a phenomenal brand by taking risks others would not take. But in comparing Tesla and Apple, it is clear the incumbent carmakers are not willing to play the role of Nokia or Motorola. When the iPhone launched in 2007, Nokia recorded €7.2bn in net profit. By 2012, its sales had collapsed and it posted a loss of more than €3bn.

The first game-changing smartphone, the BlackBerry 5810, debuted in 2002. A decade later, smartphones accounted for half of all US mobile connections. Globally, the 50 per cent threshold was passed in 2016, according to GSMA Intelligence.

Electric vehicles will need decades to claim half the global market. In Europe, Barclays expects half of all cars sold to be electric by 2030, with global penetration reaching 50 per cent after 2040 — about 30 years after the Model S first rolled off a production line. The boldest forecasts assume an EV market share this year of less than 3 per cent.

Carmakers must act quickly, but they have a luxury of time that handset providers never had. Since the Model S was introduced in June 2012, traditional carmakers’ sales and margins have not even been dented. Collective operating profits from Volkswagen, Daimler and BMW swelled from €27.8bn in 2012 to €39.8bn last year. Each earned more profit in 2017 than the $11.7bn Tesla booked as revenue.

“That is what the market has missed,” Ms Church says. “The firepower of the traditional carmakers is phenomenal.”

Despite a widely held view among investors that conventional car production facilities are a liability, it is the growing sales of petrol-guzzling SUVs and saloons that have enabled Volkswagen to earmark €34bn for electric and self-driving technology over the next five years. According to Goldman Sachs analyst Stefan Burgstaller this “should be more than funded by cash generation” and take up about one-fifth of capital expenditure and R&D by 2022.

Analysts also say global distribution networks and the ability to manufacture locally are being undervalued by the stock market. BMW sells electrified cars in 74 countries and conventional versions in 137 markets. “We know what it takes to put cars in every country,” Mr Meyer of BMW says. “That’s an asset.”

For new entrants without manufacturing plants in China — the world’s largest car market — it is difficult to see how they can dominate. And while combustion engines could be obsolete in a matter of decades, there is little evidence that the traditional players will necessarily lose out from Tesla’s first-mover status in electric cars.

Arndt Ellinghorst, analyst at Evercore ISI, says Tesla has been a “universal wake-up call” for the industry. “Musk is pushing an industry that would have just kept pushing the same product,” he says. But, he argues, the resources, capabilities, and ability to partner with technology suppliers place the incumbents in a better position to mass produce EVs.

“The incumbents may look [like they are] behind today, but everyone in the tech world wants to build with the major car companies. They have established a network to get this done globally. That’s not trivial. If you want to sell cars globally, you need to make them globally.”

As Mr Musk struggles to scale up production and diverts his attention to rocket launches at SpaceX — one of his companies which last month sent a Roadster into space — some car companies are starting to treat him less like a major threat and more like a marketer.

At the Geneva Motor Show this month, visitors were greeted by a billboard advert from Hyundai for its compact electric SUV. “Your turn, Elon,” the bold lettering proclaimed.

“The ad is intended to highlight the fact that some companies — including Hyundai — are bringing real solutions to the market,” the company said, “while others are just talking about them.” BMW’s Mr Zipse is more blunt: “We prefer to bring our cars to the street instead of sending them to the universe.”