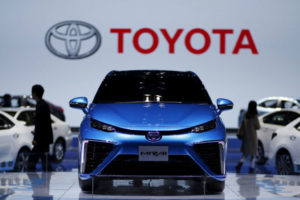 The platinum industry has been waiting for fuel-cell cars to lift demand for years. Now, just as the technology finally looks to be gaining traction, carmakers are finding ways to slash the amount of the expensive metal used.

Cars using fuel cells, which generate electricity through a chemical reaction using hydrogen as a fuel and platinum as a catalyst, comprise just a small fraction of an electric-vehicle market dominated by battery power.

Both technologies have their advantages, but a big obstacle to a wider rollout of fuel-cell vehicles has been a lack of hydrogen refuelling infrastructure. Now, however, plans are underway to build networks in the United States, Germany, Japan and, most significantly, the world’s biggest car market, China.
A number of major carmakers are building fuel-cell cars, but they are radically reducing the amount of platinum used – meaning the technology may not deliver the surge in demand for the metal that has long been flagged by some platinum producers and analysts.
The companies’ efforts are driven by cost; even at its current historically low price level, platinum is still an expensive ingredient.

At spot prices, the 30-60 grams of the metal it can take to power a mid-range fuel-cell car may cost more than $1,800. The amount needed for a diesel autocatalyst, in comparison, is worth just over $200 at the top end.

Craig Scott, director of the advanced technologies group at Japan’s Toyota, said the amount of the metal used in fuel cells – “platinum loading” – was falling across the industry, and could go further. Toyota’s Mirai, prices for which start at just over $58,000 in the United States, is the world’s best-selling fuel-cell car.

“We have been making steady progress to reduce platinum loading,” he said. The company is targeting further cuts “that would result in levels below 50 percent of today”, he added. He declined to give a precise figure for the amount of platinum used in Toyota’s fuel cells, citing commercial sensitivities.

Daimler’s new fuel-cell model, the Mercedes GLC F-Cell, already uses 90 percent less platinum than its previous fuel cell model, the B-Class F-Cell, which was launched in 2009. The automaker has reduced the size of its fuel-cell system by around one-third.

Wind said techniques such as increasing the platinum surface area used in catalysts could cut the amount of the metal needed in fuel-cell stacks.

Japan’s Honda and Germany’s Audi have said they are also looking into reducing the amount of platinum they use in their fuel-cell vehicles, though they did not specify by how much.

However, eradicating platinum entirely from fuel cells is not currently viable, according to researchers.

The large platinum reductions in fuel cells come at a time of uncertainty over the wider demand outlook for the metal in the auto industry, which accounts for more than 40 percent of consumption of the metal globally.

Platinum is primarily used in catalytic converters, with the heaviest loadings seen in diesel-engine cars. Diesel’s market share has been shrinking in its main market Europe following the Volkswagen emissions scandal of 2015. The scandal raised consumer awareness of diesel’s high emissions of nitrogen oxides, which can contribute to breathing problems and smog.

In a further blow, a court in Berlin ruled last week that some German cities can ban the most heavily polluting diesel cars.

Fuel-cell technology is still hugely overshadowed by battery power; globally over 1 million pure battery electric cars had been sold by 2016, the last year for which full figures are available, versus just 6,500 fuel-cell vehicles by the end of last year.

Advocates of the fuel-cell technology say it is the greenest form of transportation available, emitting only clean water – though critics point out that producing hydrogen itself is energy intensive. Fuel-cell vehicles are quicker to refuel than battery-powered cars, and typically have a longer range.

In a major boost to fuel-cell technology, China last month rolled out plans to promote take-up, including hydrogen refuelling capacity.

The Chinese push could lift fuel cells’ share of platinum automotive demand to as much as 5 percent by 2025, from less than 1 percent today, according to materials specialist Johnson Matthey.

Johann Wiebe, a lead analyst at precious metals consultancy GFMS, pointed to research from Stanford University that suggests platinum could be substituted for cobalt in some fuel-cell technology in development – though cobalt too is becoming pricier due to demand from battery makers, hitting near-decade highs this year after surging 150 percent in 2017.

In the meantime, thriftiness continues.

“You need to get the costs down,” he said. “The aim is to get it down to around 10 grams – the eventual goal, however, is for fuel cells not to contain more platinum than a standard autocatalyst, which is … approximately three grams.”

“That would be a sizeable downward thrift.”