Researchers at Hasselt University in Belgium are proposing a new class of solid composite electrolytes (SCEs) for Li-ion batteries: deep eutectic solvent (DES)–silica composites. The DES-based gel electrolytes—to which the team refers as eutectogels (ETGs)—are characterized by high ionic conductivity (1.46 mS cm–1), thermal (up to 130 °C) and electrochemical stability (up to 4.8 V), and are chemically inert to solvents and water.

These ETGs can be easily processed—potentially at lower costs—than ionic-liquid-based composite electrolytes. In a paper in the ACS journal Chemistry of Materials, the team reports that the good prospects of ETGs for application in Li/Li-ion batteries are demonstrated by stable cycling of Li/ETG/LiFePO4 cells over 100 cycles at C/10. 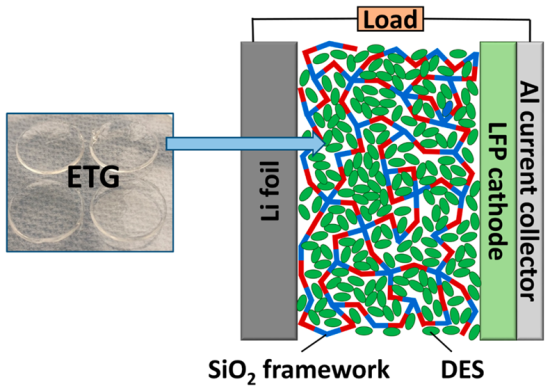 Structural schematic of a Li/LFP cell with the ETG as electrolyte. Joos et al.

… a gradual move beyond the state-of-the-art lithium-ion batteries (LIBs) is inevitable on account of their potential safety hazards, high price, and gravimetric/volumetric storage limits. These short-comings are believed to be resolved to a great extent by the development of an ideal solid electrolyte. The organic liquid electrolytes in conventional LIBs are flammable, prone to excessive oxidation at potentials as low as 4.2 V versus Li, and unable to stop the growth of lithium dendrites. Hence, a Li-ion conductive solid electrolyte with a broader electrochemical and thermal stability is highly desired to enable the deployment of next generation of insertion cathodes, for example, high voltage LMNO, and to revive the ancestor of LIBs, that is, Li- metal batteries (LMBs).

In recent years, the concept of solid composite electrolyte (SCE) has aroused considerable interest in the battery community. A liquid electrolyte is immobilized in a solid skeleton resulting in a SCE, which is then endowed with the synergies from both components. Ionogels are good examples of SCEs in which an ionic liquid is confined within an inorganic (e.g., Silica) or hybrid (e.g., silica-PVDF-co-HEA) solid matrix. A new class of solvents has emerged recently, that is, the deep eutectic solvents (DES). These solvents share many attributes with the ionic liquids among which a low vapor pressure and nonflammability. However, they benefit from additional advantages such as ease of fabrication and low cost of components.

… Here, we introduce eutectogels (ETGs) as a new class of SCEs in which a DES is confined within a silica matrix.

The Li+-conducting deep eutectic solvent (DES) is a blend of n-methylacetamide (NMAC) and bis(trifluoromethane)sulfonimide lithium salt (LiTFSI). Recent investigations of DES suggest an optimal molar ratio of LiTFSI:NMAC = 1:4 for applications in Li-ion batteries and capacitors.

Using the same composition, the team confined DES within a silica matrix via a nonaqueous sol-gel route. The resulting ETGs are transparent, homogeneous, glass-like monoliths without cracks. Cross-sections of the ETGs showed a porous structure filled with DES.