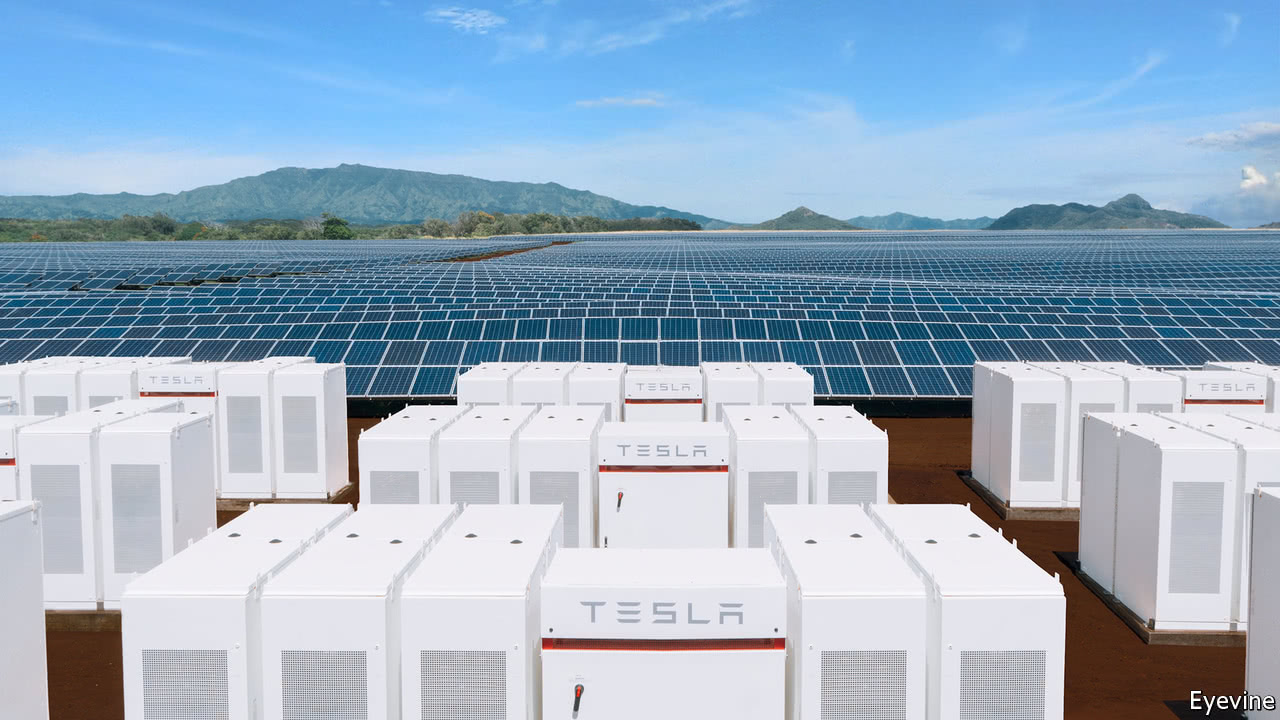 A TUMBLEDOWN farmhouse from Australia’s pioneering days has unlikely new neighbours. Giant wind turbines owned by Neoen, a French company, loom over it in the dusty red scrubland outside Jamestown, north of Adelaide, the capital of the state of South Australia. The world’s biggest lithium-ion battery sits a stone’s throw away. Elon Musk, a Silicon Valley entrepreneur, installed it last year through his company, Tesla, to store energy from the turbines and feed it back to the grid when other supplies run short. About 100km to the west, across the Spencer Gulf, Sanjeev Gupta, a British billionaire, is also pouring money into renewable energy. He is building solar and pumped-storage hydropower plants to revive a failed steelworks at Whyalla that he bought six months ago.

With just 7% of Australia’s population, South Australia has become a testing ground for a political argument about how hard the government should push to replace fossil fuels with cleaner energy. The projects at Jamestown and Whyalla loom large in the state election on March 17th. The rest of Australia, too, is paying more attention than it normally would. The last coal-fired power station in South Australia closed two years ago. While the bigger eastern states still rely on coal for most of their electricity, South Australia now gets almost half of its power from wind and solar, the highest proportion in the country. (The rest comes mainly from gas.)

Jay Weatherill, the state’s Labor premier, recently set an even higher renewable-energy target: 75% by 2025. The federal government, a coalition of the (conservative) Liberals and Nationals, has dismissed this as a “big experiment”. Josh Frydenberg, the federal energy minister, likens Mr Weatherill to a “problem gambler chasing his losses”. He says too much renewable power will lead to blackouts and push up power prices. Instead, his latest energy plan calls for reliable electricity from any source, although the details remain unclear. Critics see this scepticism as a bid to guarantee a future for coal, a big industry in Australia. The federal renewables target, about two-thirds lower than South Australia’s, expires in 2020.

South Australia has long been connected to a grid encompassing four other states in eastern Australia with 40,000km of transmission lines. But in 2016 a freak storm disconnected it, leading to a statewide blackout. A smaller outage followed five months later. To Mr Weatherill, the drama meant the national electricity market was “failing”. He launched a plan a year ago for South Australia to “take charge” of its own energy with A$550m ($430m) of public money, by building a gas-fired plant and financing green projects. Private investors are keen. Solar Reserve, a Californian company, will start work on a solar thermal power plant at Port Augusta, near Whyalla, this year. Tesla will build a “virtual power plant” by fitting 50,000 homes with solar panels and batteries.

Neoen now owns and runs the giant battery next to its 99 wind turbines on the edge of the Flinders Ranges, one of Australia’s windiest places. The device started operating in December, in the middle of a hot summer, when demand for air-conditioning is high. Since then, says Franck Woitiez of Neoen, it has kicked in several dozen times in response to “unexpected failures” at coal-fired plants as far away as Queensland, in north-east Australia. The Australian Energy Market Operator, which oversees the national system, seems to approve of South Australia’s initiatives. Audrey Zibelman, its head, says the battery is “faster than traditional generators” and dependable: “That’s important to us.”

The scale of foreign investment in South Australia’s projects also seems to defy sceptics. Mr Gupta alone, through his company GFC Alliance, is spending about A$1bn on the Whyalla steelworks. He has also bought a majority stake in Zen Energy, an Australian renewables outfit, to power the works. He thinks South Australia can become a “hub of renewables industries”.

But South Australia has higher wholesale electricity prices than other states. Its unemployment rate, 6%, is Australia’s second-highest, partly because of the closure of its last car factory last year. Steven Marshall, the Liberal candidate for premier, says scrapping Mr Weatherill’s renewable-energy targets would reduce power prices and so boost the local economy. He wants to focus instead on improving transmission lines to the rest of the country.

Mr Weatherill argues the reverse: that turning the state into a renewables powerhouse will mean more jobs and lower power prices. A recent poll showed more people approve of his renewable-energy target than disapprove. But the election could still be close. Labor has been in power for 16 years (with Mr Weatherill as leader for just over six). To further muddy the waters, Nick Xenophon, a former independent federal senator, is fielding candidates for SA-Best, his new state party, in most seats. His energy policy is woolly, and his support appears to be waning, but he could still take votes from both big parties. The field is confused enough, in short, that the result is unlikely to resolve the debate about renewables, whichever party ends up in charge.