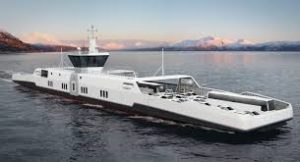 The reality of battery-powered ULCCs may still be some way into the future, but ferry firms are among an increasing number of companies operating smaller vessels that are swapping traditional oil-based bunkers for battery power.

Among those are Norway’s Fjord1, who today said it had placed an order for seven new battery-powered ferries that will all feature “zero and low-emission technology based on electric propulsion.”

The ferries will carry between 50 and 80 passengers and are expected to be delivered during the fall of 2019.

Stena Line, meanwhile, Friday said it recently signed a contract with Callenberg Technology Group that will see marine batteries installed on the Stena Jutlandica. The vessel can carry up to 1,500 passengers and 550 cars.

The tech is being rolled out across three phases, and starting this Summer it will initially allow the vessel to operate on battery power during berthing operations.

A second phase will see the vessel use battery power for around 10 nautical miles of its journey, before a final third step will allow Stena Jutlandica to complete its entire 50 nautical mile route between Gothenburg and Frederikshavn on battery power.

“As both the size and cost of batteries decreases, battery operation is becoming a very exciting alternative to traditional fuels for shipping, with the added prospect of emissions to the air being completely eliminated,” says Stena Line’s CEO Niclas Mårtensson.

Ferries are not the only current candidates for battery power. Last month Corvus Energy said it would fit four platform supply vessels (PSV) active in the Gulf of Mexico with lithium ion-based batteries.